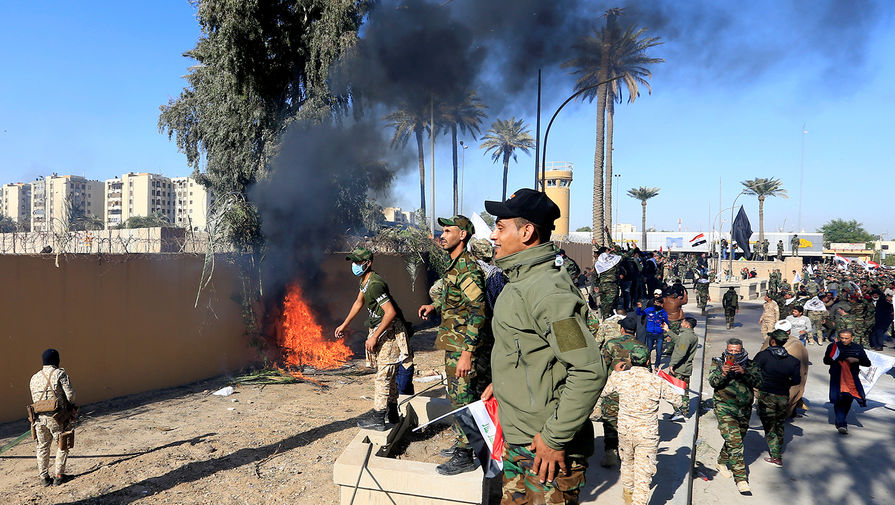 After a rocket attack on the U.S. Embassy in Baghdad remains tense situation, told TASS representative of the press service of the us state Department. In connection with this, Washington called on Iraq to fulfil its obligations to protect diplomatic facilities of the United States.

“The situation in terms of security, remains tense, and armed factions supported by Iran, remain a threat. In this regard, we remain vigilant,” he said.

According to the representative of foreign policy Department of the USA, since last September in Iraq, there were more than 14 attacks from Iran and Iranian-backed militias on American troops and diplomats.

However, he declined to provide more specific information about the shelling of the Embassy.

Earlier, the shelling of the American Embassy in Baghdad announced a number of media. As passed Alsumaria, citing a source in the security forces said the attack injured at least three people. The interlocutor of the edition noted that immediately after the incident, the evacuation of people from buildings and have adopted “security measures”.

According to other media reports, in result of a rocket attack on the Embassy, injuring at least one person. In recent months, the American Embassy in Baghdad was repeatedly subjected to various kinds of attacks, but now for the first time under fire of the rocket fell directly on the territory of the diplomatic mission.

Five rockets were fired on the night of 26 January in the “green zone” of Baghdad, is a fortified area in the centre of the city.

There are the government offices and foreign diplomatic missions. Three rockets fell directly on the territory of the Embassy, and one of them came to the canteen building.

After the incident, acting Prime Minister of Iraq, Adel Abdel Mahdi ordered the country’s security forces to find and punish the perpetrators of the attack on the diplomatic mission and also to take all measures to prevent the recurrence of attacks on the U.S. Embassy in Baghdad.

The speaker of the Iraqi Parliament Mohammed al Halbusi stressed that the rocket attack on the American Embassy is detrimental to the reputation and sovereignty of Iraq.

Occurred on the eve of the attack was the second in the past week.

Once again, three rockets fell near the Embassy on January 20. As reported by Reuters, citing sources in the Iraqi police, missiles were launched from the area of Zafaraniya on the outskirts of the Iraqi capital. Two of them exploded near the American Embassy. Information about the explosions in the area was confirmed by sources of the TV channel Al Arabiya.

Then the attack happened against the backdrop of clashes in Baghdad, protesters and security forces. As aired by Al Arabiya, during the riots from gunshot wounds three people were killed, 70 were injured. Police used tear gas against protesters.

Since the beginning of this year on the American Embassy in Baghdad and military bases that host U.S. servicemen, was several times committed the missile attack.

According to official information, as a result of these attacks, not one American died.

The situation in the middle East escalated after US troops hit the objects Shiite “Kataib Hezbollah” in Syria and Iraq in late December. This provoked the beginning of the movement’s supporters to storm the us Embassy in Baghdad.

In the end, Washington January 3, held a special operation, during which was killed the commander of the special unit of the Islamic revolutionary guard Corps (IRGC) of the Iranian General Qasem Soleimani and Deputy head of the Iraqi Shiite militia, Abu Mahdi al-Muhandis. In the US they were accused of involvement in the storming of the Embassy.

Iran responded by firing rockets at American bases in Iraq on the night of 8 January. In Tehran these actions called retribution for the murder of Soleimani.