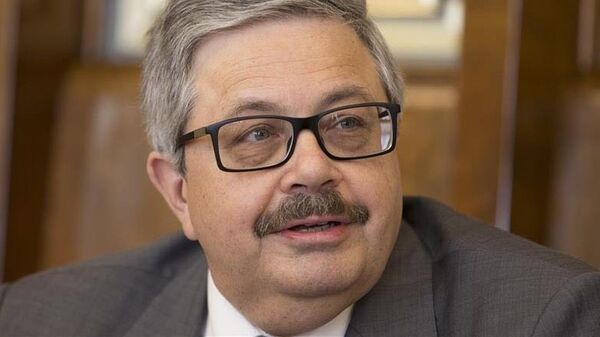 Russia’s Ambassador to Turkey, Alexei erkhov said that he continues to receive threats.

Earlier, the diplomat noted that the latest developments in the Syrian province called anti-Russian hysteria in Turkish social media.

Comments in “the Star” Argov said that the users of the Network continue to send insults.

“From the last, that are attacked last night and this morning, things like “We will construct skyscrapers from the skulls of your soldiers” and “Pay the price for every drop you spilled blood” and so forth,” he said.

The Ambassador noted that the information field around the theme of safety of the Russian diplomatic missions in recent years “significantly cleaned up”.

Argov explained that such statements cannot be ignored, as they relate not only to diplomats, but Russia and all that it represents.

“In these matters you need to take extreme caution and extreme delicacy, it is impossible to provoke anger and hatred, to stir up hatred between peoples,” he concluded.

The press attache of the Embassy, Irina Kasimova earlier told RIA Novosti that the Turkish authorities have taken additional measures for the protection of the Russian Embassy in Ankara, a similar statement was made by Turkish foreign Ministry. The Kremlin also expressed confidence that Turkey will take all measures for the safety of the Embassy staff, and every one of the Russians.

The escalation in Idlib

In accordance with the agreement reached in may 2017 by representatives of Russia, Iran and Turkey, Syria was established four zones of de-escalation. The territory of the three of them in 2018 under the control of Damascus. The fourth area, located in Idlib province and parts of neighboring provinces of Latakia, Hama and Aleppo, remain beyond the government of the Republic. A large part of captured terrorists “dzhebhat an-Nusra.”* In September 2018 Russia and Turkey agreed to establish a demilitarized zone in Idlib, where more than a dozen different groups.

In late January, the Syrian army launched an offensive in the West of Aleppo in connection with daily attacks by terrorists residential areas of the city, which killed dozens of civilians.

In early February, Turkey announced the deaths of eight servicemen in the shelling from Syria. In the words of President Recep Tayyip Erdogan, the victims of retaliatory attacks were 76 Syrian soldiers. The head of state noted that he spoke to President Vladimir Putin with a request to exert pressure on Syrian leader Bashar al-Assad to government forces to halt the offensive in Idlib and moved to the end of February from Turkish observation posts. Otherwise, Erdogan threatened a military response.

On Monday, the Turkish authorities also said five of those killed in the shelling observation post in Idlib by the Syrian army.

Erdogan has accused Russia and Syria to the shelling of civilians in Idlib. Moscow rejected the accusations and stressed that the cause of the escalation in the Syrian province was the failure of Ankara’s obligations. The defense Ministry also noted that the weapons for militants coming from Turkey.

*Banned in Russia as a terrorist organization.

The EU expressed a desire to "speak the language of force"

Is there life without the West: that is not decided in Munich