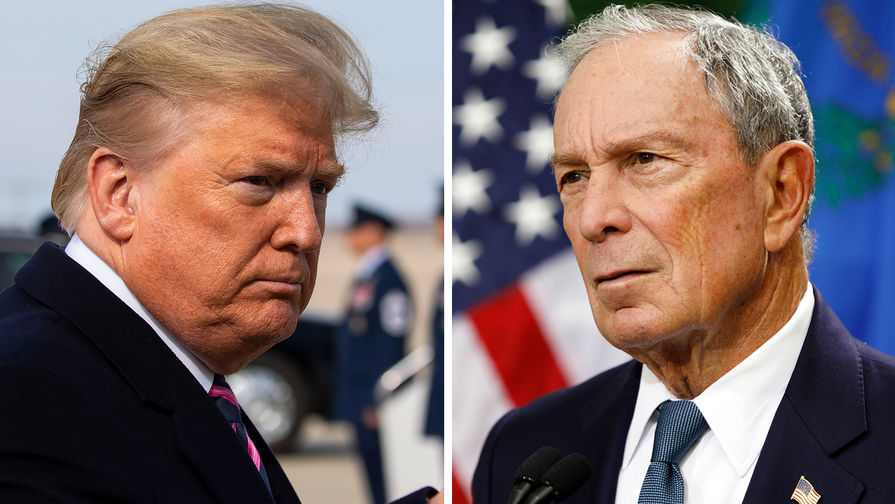 Billionaire Michael Bloomberg is gaining popularity among the voters, causing the wrath of his rivals in the Democratic party. In the polls, the former mayor of new York city approached a new favourite in the race, Bernie Sanders, while not even participating in the preliminary vote. Because of this, the former mayor of new York accused of “buying elections” and compare with Donald trump. How is the election campaign of the “dark horse” in the material “Газеты.Ru”.

Former new York mayor billionaire Michael Bloomberg for the first time will take part in a televised debate of potential presidential candidates from the Democratic party. Founder and owner of Bloomberg will join the debate in Las Vegas, which will be held on February 19.

To participate in the debate, former mayor of new York had to score at least 10% in four different polls at the national level. With this task he coped without any problems, and in some studies it even took second place.

According to a poll by NBC/WSJ of February 17, the Senator from Vermont Bernie Sanders — 27%, followed by former us Vice-President Joe Biden — 15%, third place is shared by Bloomberg and Senator from Massachusetts, Elizabeth Warren 14%, and the fourth is a former mayor of South Bend Pete Buttidzhich — 13%.

The outsider of the race is the Senator from state of Minnesota Amy Klobuchar in the polls, she scored 7% and 5%, respectively. However, she still managed to overcome the threshold, and she will also take part in the debate.

The entry of Bloomberg into the race for the presidency introduces chaos into the already chaotic campaign of the Democrats. Analysts say the former mayor of new York city’s “dark horse”, mainly because of its huge financial resources — his fortune is estimated at $62 billion.

Bloomberg has invested in his campaign more than $400 million and does not exclude that amount will increase to $1 billion. Most of the money a candidate spends on advertising, which allowed him to quickly raise your rating at the end of December last year, former mayor in the polls Ipsos/Reuters and NBC/WSJ have gained only 4-5%.

The successful launch of Bloomberg negatively perceived by his rivals. So, Warren and Sanders accused the ex-mayor in an attempt to ensure the success solely by his wealth. In particular, the Senator from Vermont noted that the American people are tired of billionaires “buying elections” opaque alluding to US President Donald trump.

By the way, this Bloomberg accused the American leader. According to trump, the billionaire in a large volume makes it illegal donations to his campaign and is trying to “buy” a place candidate.

Even more frustrating competitors Bloomberg the fact that he was able to climb to the second place ranking, not participating in the debate and the first primary election, the Caucus in Iowa and primaries in new Hampshire.

In particular, the emergence of the former mayor of new York is not satisfied with Joe Biden, who actually lost the title favorite of the election campaign of the Democrats because of the failures in Iowa and new Hampshire. The Caucus former Vice-President of the USA took fourth place with 15.8% of the votes and in the primaries fell even lower — in fifth place with 8.4%.

Biden has already promised to ask Bloomberg about his work as mayor of new York. In particular, the former Vice President is interested in the resolution for street searches by the police, which has been promoting Bloomberg. Often, law enforcement officers searched African Americans and Hispanics, for which the former mayor had to apologize.

However, the attacks of the opponents to each other — one of the main components of the debate, which is, of course, informed Bloomberg. Probably, opponents of the former mayor also will not miss the moment and will compare it with trump.

In addition to a large Bank account, Bloomberg, and the President of the United States are quite little in common. If you compare their electoral campaign, the elections of 2016, Trump was worth over $420 million But to say that money allowed him to become President, it is not impossible.

Trump before the election enjoyed a certain popularity in the United States, led a successful TV show the apprentice, had the contest “Miss universe” and also starred in movies and TV series. A businessman has been formed a certain circle of followers across the country than Bloomberg has not.

Of course, it is popular in new York, where he was mayor for 11 years, and in business circles, but no “fan club” had not. The story of searches of minorities, and even alienates him from the main group of voters Democrats.

Moreover, the whole election campaign of the democratic party, built in struggle against the billionaire trump, and the same “rich man” among his rivals looks quite ironic. Though Blumberg says that he intends to “180 degrees” different from the current U.S. President.

So, he is willing to sell his company Bloomberg LP in the case of a victory on elections. In the team of billionaire noted that Trump had to abandon its own financial interests, as this was the biggest stain on his presidency.

Distinguishes Bloomberg from trump and the fact that he ignored the party debates and primary elections. The current President of the USA in 2016 don’t miss an opportunity to speak in public, as in the current election campaign.

Democrats debate in Las Vegas will actually be the first public Playground, which was addressed by Bloomberg. The debate will be held ahead of the Caucus in Nevada, scheduled for February 22. The results of this discussion may affect the results of the vote, but former new York mayor is not concerned.

Joining the race later than other candidates, Bloomberg conceded the Caucus in Iowa and new Hampshire and Nevada and South Carolina. So the team of billionaire focused all their attention on “super Tuesday” — March 3, when voting will take place in 14 us States. This will be a test of strength for a candidate that demonstrates good performance in the polls.

Despite the fact that Bloomberg will miss voting in Nevada and South Carolina, elections in these States may play in his favor. The Caucus in Iowa and primaries in new Hampshire cut three unpopular participants in the race — Andrew young, Michael Bennett and Deval Patrick in the polls they could not overcome the 5 per cent threshold.

This situation may be repeated after the elections in the next two States that will reduce the spread of votes in the “super Tuesday”, some of which may go to Bloomberg. At the present time an active campaign is carried out a total of eight candidates. Among the main outsiders — Congresswoman Tulsi Ms. Gabbard and businessman Tom Stayer in the national polls, they cannot overcome the threshold of 3%.

The Caucus in Iowa, the candidates failed to gain more than 2% of the votes and in the primaries in new Emprise received a little more than 3%. Therefore, it is likely, Ms. Gabbard and Stayer can be called among the main contenders for the drop out of the race.

JIT was accused of “nedorazvedany” the catastrophe of MH17: a revived version of the Ukrainian fighters, and “Letter” allegedly did not exist