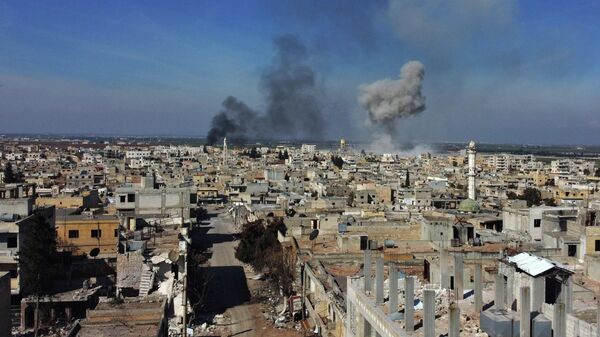 The Syrian army command announced the closure of airspace over the province of Idlib, reports Syrian state Agency SANA.

“Any aircraft violating our airspace, will be perceived as hostile and shot down with the purpose to prevent the execution of their tasks,” the report States.

According to media reports, the Turkish Armed forces continue to attack the Syrian army in Idlib and its surroundings.

“Turkey literally save the terrorists from the blows of the Syrian army. This confirms the non-observance by Turkey of all the agreements reached earlier, including the Sochi”, — reads the statement.

The situation in the North of Syria

A week ago Pro-Turkish militia, supported by artillery of the Turkish armed forces broke through the defenses of the Syrian army in the area of Kinase and Naraba. Russian su-24 struck him a blow that allowed the Syrians to successfully repel all attacks. According to the defense Ministry of Turkey, during an air attack in Idlib killed two Turkish soldiers and five others were wounded. TSPVS urged Ankara to stop supporting terrorists.

The situation in the region escalated on February 27 when the terrorists “Hayat Tahrir al-sham” began a massive offensive against the positions of Syrian government forces. Army cap returned fire. The shelling killed 36 of the Turkish military, which was not supposed to be there, another 30 were injured.

Immediately after this, the Russian side has taken measures to cease-fire, to ensure evacuation of the dead and injured Turkish soldiers to their homeland. After the escalation of the conflict, Turkish President Recep Tayyip Erdogan convened a security meeting.

The NATO Council on Friday held consultations on the situation in Syria in response to a request from Ankara. The US state Department told RIA Novosti that “considering options for how best to support Turkey in this crisis.”

Russia, Iran and Turkey in may 2017 in Astana (now Nur-Sultan) have agreed to establish four zones of de-escalation in Syria. Three of them in 2018 under the control of Damascus. The fourth area, located in Idlib province and parts of neighboring provinces of Latakia, Hama and Aleppo, while government troops not busy, most of it from captured terrorists “dzhebhat an-Nusra.”*

Then, in September of 2018, Moscow and Ankara in the negotiations in Sochi made a decision on the establishment of a demilitarized zone in Idlib, where more than a dozen different groups. The largest of them — Union of Pro-Turkish groups “national liberation front” and “Dzhebhat EN-Nusra”*, only about 30 thousand fighters.

The Syrian army in the end of January launched an offensive in Idlib and Aleppo in connection with daily attacks by terrorists on residential neighborhoods, which killed dozens of civilians. For a month, Assad’s troops have managed to release more than 600 square kilometers, the largest city of Maaret al Nuuman and M5 (Damascus — Aleppo).

Amid the escalation in Idlib Ankara and some of its partners have accused Damascus and Moscow in attacks on humanitarian facilities and Turkish military.

In Russia and Syria has repeatedly stressed that the cause of instability in the region, the actions of terrorists. Thus, Russian foreign Minister Sergei Lavrov said earlier that Turkey was unable to fulfil some key commitments to address issues around the Syrian Idlib. In particular, it does not disassociate themselves armed opposition that is ready to dialogue with the government through the political process, from terrorists. In turn, Vice-the President of Turkey Fuat oktay believes that its obligations in Idlib, the country has implemented.

Earlier, Erdogan said that Turkey has not received an unsatisfactory outcome in the negotiations with Russia on Idlib and ready for the beginning of military operations in the region.