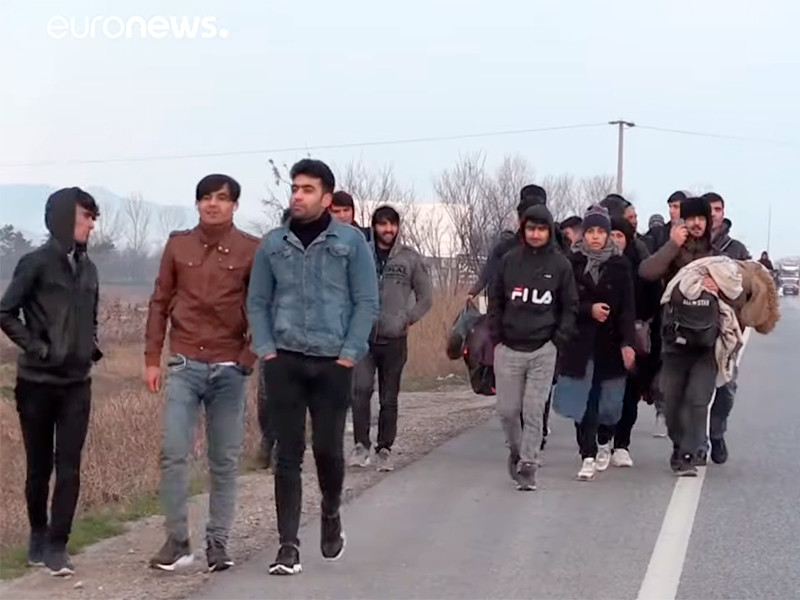 Thousands of refugees have used the regime of open borders declared by the President of Turkey Recep Tayyip Erdogan. “Turkey opened the border only on the morning of 29 February in Europe rushed 18 thousand refugees. Most likely, this figure will reach 25-30 thousand. Turkey will continue to ignore the refugees across the border,” Erdogan said, quoted by the Anadolu news Agency.

Amid the escalation in Idlib, the Turkish authorities took the decision within 72 hours does not stop illegal migrants and refugees who seek to reach Europe by sea or land. The Turkish officers, coast guard and border crossings have been instructed to do nothing.

The President said that Turkey is already 3.7 million Syrians, and the country will not master a new wave of refugees due to the deterioration of the situation in the Syrian Idlib. “A half million Syrians are currently stranded at the Turkish border. These people fleeing the violence and lawlessness perpetrated by the regime of Bashar al-Assad,” – said the Turkish leader. He reminded that Ankara a few months ago promised to open doors to refugees in Europe but to her statements, no one believed.

Greece and Bulgaria, which have common borders with Turkey, sent to the transitional points of reinforcements of security forces. Greece was not allowed on its territory of more than 4 thousand illegal immigrants, a spokesman for the Greek government Stelios Petsas. Between the police and the refugees on Saturday there were collisions, to the border sent military equipment. Police used tear gas.

Happening now in Kastanies #Evros where hundreds of migrants and refugees are trapped between Greece and Turkey, after Ankara stopped border controls and allowed -if not actively pushed- them there to pressure Europe. Greek police deter any crossing attempt with tear gas pic.twitter.com/M78yuSBNqQ

Petsas said that the past 66 migrants were arrested and “have nothing to do with Idlib”. In the region of Evros sent additional forces of police and army in the Aegean Islands strengthened coast guard forces, RIA “Novosti”. “The government is determined to do whatever it takes to protect our borders,” said Petsas.

“Greece is not responsible for the tragic events in Syria and will not suffer the consequences of decisions taken by others. I informed the EU about the situation,” – wrote in his Twitter, the Prime Minister of Greece Kyriakos Mitsotakis. Instead of the planned trip to the island of Samos, he held an emergency meeting with security Ministers, commanders of the armed forces and representatives of the coast guard.

“Our country accepts and welcomes all individuals with legitimate travel documents, but we can’t make citizens of other countries without travel documents,” – said the Minister of citizens protection Michalis Chrisohoidis, quoted by euronews.

According to the Greek side, Turkey not only does not prevent, but also contributes to the promotion of migrants and refugees to the border. Ankara States that have relaxed control over the borders with the EU, as she did not pay agreed with Brussels funds for the maintenance of refugees that it accepts.

The decision of Turkey to open borders actually means failure to comply with the terms of the agreement with the European Union from 2016, notes the BBC Russian service. Brussels and Ankara have agreed that illegal migrants coming from Turkey to the Greek Islands will return back to Turkey. Ankara has also pledged to do everything possible to close the Maritime and overland routes for illegal migrants heading to the EU.

In exchange for commitments Turkey had to receive EU € 6 billion. In addition, Brussels has promised to accelerate the negotiations on Turkey’s membership in the EU, and in the short term – to ease the visa regime for Turks. However, the EU never did, citing the fact that Ankara has not fulfilled all required conditions.

To defend the borders from the flow of refugees prepares and Austria. Chancellor Sebastian Kurz announced that the country is ready to support EU countries at the external border of the extra cops. “If the protection of the external EU borders fail, then Austria to defend its border,” wrote Kurtz on Twitter.