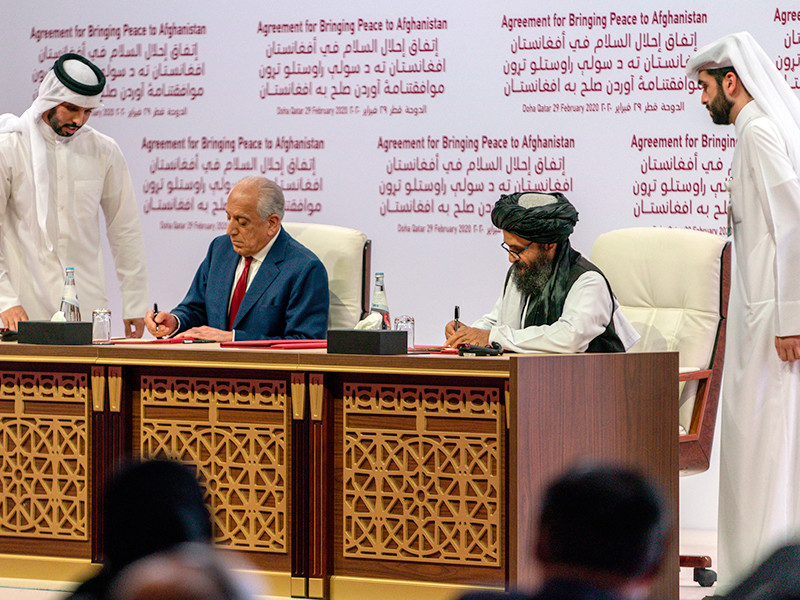 The US and the radical movement “Taliban”* signed a historic peace Treaty, designed to launch the peace process in Afghanistan and to put an end to the war, which began after the terrorist attack of 11 September 2001 and has become the longest in American history.

At the signing of the agreement in the Qatari capital Doha was attended by the US Secretary of state Mike Pompeo, Minister of defense mark Esper, President of Afghanistan, Mohammad Ashraf Ghani, NATO Secretary General Jens Stoltenberg, representatives from more than 30 countries.

Signatures under the document were put by the US special envoy for Afghanistan Zalmay Khalilzad and Deputy leader of the Taliban* Abdullah Gani Baradar. According to the agreement, the US within 135 days will reduce the number of troops in Afghanistan from 13 thousand to 8.6 thousand people, and then, if the Taliban* will refrain from violence, will continue for 14 months to withdraw from the country and their forces, and NATO forces.

The US also affirmed its commitment to support Afghan security forces and with the consent of Afghanistan is ready to continue military operations against “al-Qaeda”*, the “Islamic state” and other extremist groups, writes portal “Afghanistan.Ru”.

In accordance with the agreement, Afghanistan and the United States due to the March 10 release from a government prison 5 thousand Taliban*, while the Taliban* needs to release thousands of prisoners to March 10 and not allow extremists to use Afghanistan as a platform for attacks against the U.S. or its allies.

10 days after the signing of the peace agreement between the Taliban* and Afghan authorities to begin negotiations for which the United States is ready to assist. The Taliban* will also begin to interact with the UN Security Council to members of the movement excluded from the sanctions list. It is supposed to do by the end of may, passes RIA “news”.

The document States that the governments of the United States and Afghanistan committed to continue “positive relations”, including economic cooperation on reconstruction of Afghanistan. President Ashraf Ghani expressed the hope that through the agreement the cease-fire in Afghanistan will be permanent.

“We will closely monitor the implementation of the “Taliban”* its obligations, said Mike Pompeo. – With this we can ensure that Afghanistan will never again be a base for international terrorists. The negotiation process in Doha has shown that, together, we can take these actions” (quoted by TASS).

Former Ambassador of the Taliban* in Islamabad Mullah Abdul Salam Zaif on the sidelines of the signing ceremony of the agreement said that the movement is not interested in continuing the war in Afghanistan, “she was imposed on him from outside.”

From February 22 in Afghanistan during the week acted “mode to reduce the level of violence.” This week was supposed to be a kind of test of how the Taliban* unable to control their powers and to perform its obligations after the transaction, writes the BBC Russian service.

The UN mission for assistance to Afghanistan (UNAMA) welcomed the successful completion of the seven-day period of reduced violence. “Now all parties concerned should make a real and concrete steps to end the war,” said the special representative of the UN Secretary General for Afghanistan and head of UNAMA, Tadamichi Yamamoto, quoted by “Voice of America”.

According to Secretary of state, over the past seven days the level of violence was the lowest in four years. “But we are only at the beginning. For the world requires serious work and effort from all sides – the US, the coalition, the Taliban*, the government of Afghanistan and other Afghan leaders, the Afghans themselves to achieve a comprehensive peace,” said Pompeo.

Russia has described the signing of the agreement between the U.S. and the Taliban* “an important event for the peace process in Afghanistan.” “The Russian side has repeatedly stated about the inevitability of political and diplomatic methods of conflict settlement in Afghanistan, support the negotiations that should pave the way for the launch of direct inclusive inter-Afghan dialogue on peace and a political settlement in this country,” – said the official representative of Russian foreign Ministry Maria Zakharova.

The war in Afghanistan has cost the U.S. almost $ 1 trillion and claimed the lives of approximately 2.4 million American soldiers. According to the UN mission for assistance to Afghanistan, which since 2009, has been counting the dead and injured in this country over the last 10 years there were 35 thousand civilians, 65 thousand people were injured.

Last summer, the UN released a report stating that in the first half of 2019 as a result of actions of the Afghan army and NATO forces in Afghanistan have killed more civilians than at the hands of the Taliban*, and the “Islamic state”*.

The main stage of negotiations between the U.S. and the Taliban* continued for several months in 2019. During the eight rounds of negotiations, the US representative for Afghanistan Zalmay Khalilzad and a delegation of the political office of the Taliban* in Doha agreed on a draft peace Treaty, which provided for a ceasefire, the withdrawal of foreign troops from Afghanistan and the beginning of universal inter-Afghan peace talks.

However, in September after a series of terrorist attacks by the Taliban* Kabul and several other cities, among the victims were us military, US President, Donald trump ordered to stop talks with the Taliban* and to cancel the signing of the agreement.