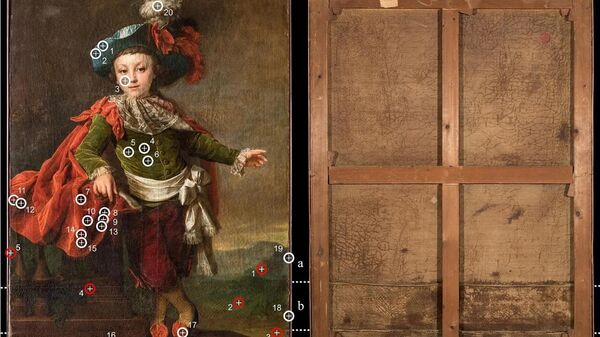 Cooperation with chemists and physicists have helped the Museum uncover the mystery of the portrait by Dmitry Levitsky, stored in the Tretyakov gallery. The canvas on which to paint a portrait consists of three parts, and until recently it was not known whether all pictures belong to the brush of the master. The study is published in the journal Heritage Science.

We are talking about the painting “Portrait of F. P. Makarovskogo in costume” (1789). Before restoration scientists from the Tretyakov gallery carefully studied the portrait. This painting is one of the masterpieces of the Mature master and a rare example of a children’s costume of the ceremonial portrait in Russian art — not just demanding the restoration due to damage of paint and a thick layer of yellowed varnish. Before restorers was much more challenging.

It was necessary, as far as possible, to bring the portrait to its original appearance without affecting the author’s layer of painting. The problem was that the canvas consists of three parts, and although the identity of the main canvas Levitsky not be questioned, it was unclear when he added the other two strip foundations on which the written portion of the image below the knees of the model. Despite the fact that is sewn to the main fabric extensions are visible in the photographs of the early XX century, doubts arose because of the different structure of the joints between the fragments: the top is neat, and the lower more coarse.

The gallery staff asked for help to the scientists of the Moscow Institute of physics and technology (MIPT) and the Institute of General and inorganic chemistry named after N. S. Kurnakov (ionkh ran).

“Our laboratory and scientific team of the Tretyakov gallery connects methodical cooperation, which, in 2017 with the support chief curator Tatyana Gorodkova was sealed with the agreement between MIPT and a gallery — presented in the press release of the Institute the words of Victor Ivanov, the head of the center for testing of functional materials MIPT and one of the authors of the article. In the framework of this agreement we will jointly develop the approach to conducting comprehensive studies of the paintings with the use of modern methods of local diagnostics of materials and nanomaterials. The accumulated methodological baggage has enabled us to productively participate in predstavlennyh research works by Dmitry Levitsky with the purpose of establishing the boundaries of the original painting.”

The study involved a large team. In addition to researchers from MIPT and the physicochemical, the work, which lasted more than two years, drew and restorers, art historians, engineers and chemists from the Tretyakov gallery. Predstavlenny comprehensive analysis of the composition of art materials showed that extensions really belong Levitsky.

Initial tests revealed differences between the main canvas and extensions. Characteristic for the works of Levitsky, a two-layer soil found only on the main part of the portrait. But then it turned out that for both extensions the soil is similar in structure and composition, and also close the lower of the two soil layers at the main part of the canvas. The authors suggest that the artist had more time on the first stage. Probably, the composition of the painting went beyond the carefully prepared canvas, and then Levitsky had to sew one extension and then another.

Analysis of paint layers also showed similar composition on the whole canvas, including the two extensions. In particular, the green pigment is present in each of the three parts and has the same origin: the method of IR spectroscopy was able to identify it as the malachite.

Common origin of the two extensions is further confirmed by the analysis of the brown pigment. For this purpose we used the methods of IR-, Raman-spectroscopy, scanning electron microscopy with x-ray microanalysis.

In the end, the analysis of the paint layer showed that he fully belongs to the author, and a side fabric and the main part of the portrait is bound to the creative process.

Such a comprehensive analysis of painting Levitsky held for the first time. Specialists of the Tretyakov gallery say that, in addition to significant contribution to the preparation of restoration tasks, he helped to expand understanding not only of the artist but also about the artistic practice of Russian painting of the XVIII century.

“In my opinion, it is the presence of a team of art historians, chemists and physicists has become the key to success in this work, — said Ivan Volkov, chief researcher of the laboratory of MIPT. — Regular meetings were held with the participation of the team of the Tretyakov gallery and us materials scientists. We had to gradually develop a common language, but it was worth it.”

Scientists believe that now that the methodology developed and successfully tested, it can be applied to other works. Meanwhile, the restoration of the portrait Makarovskogo is already completed and soon work will return to the main exposition.