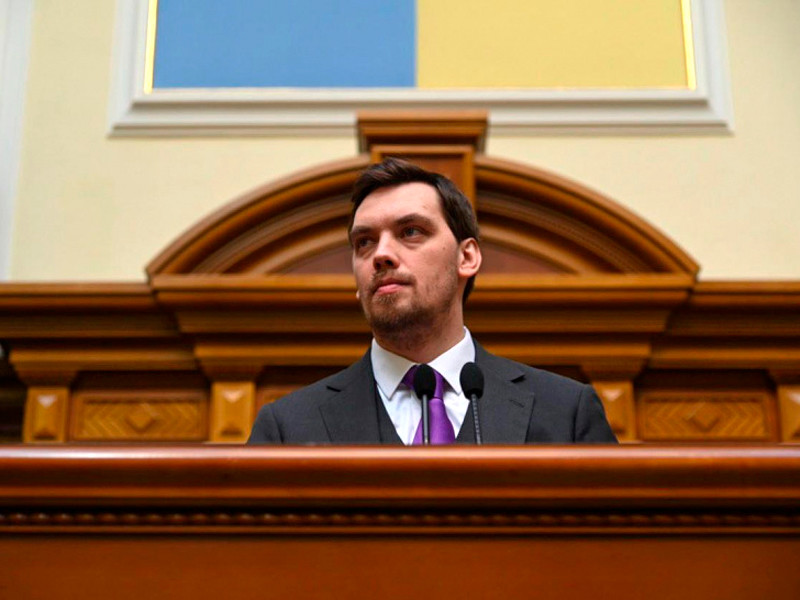 The Verkhovna Rada of Ukraine approved the resignation of Alexey Goncharuk Prime Minister of the country. At an extraordinary meeting on Wednesday the decision was supported by 353 people’s deputies with 226 required, reports TASS.

In accordance with the Constitution of Ukraine, this decision leads to the resignation of the entire government.

Before the vote in Parliament was addressed by President Vladimir Zelensky, who acknowledged a number of achievements in the work of the government Goncharuk, but highlighted serious failures in its activities.

The President said that the present government is the first, where there is no corruption. “But not to steal – this is not enough”, – he said. Among the achievements of the Cabinet Zelensky took the reduction of inflation, the NBU discount rate, the fight against the shadow markets, the beginning of privatisation, loans to small and medium-sized businesses. “But! The truth is that the Ukrainians do not”, – he said.

The President, in particular, sharply criticized the results of the work of the State customs service, recalled the ongoing decline of the industry, said the failure of government’s outreach in the field of utility bills, especially for gas. He also thanked the Minister of health because she stayed with evacuees from China Ukrainians placed in quarantine in New Sanzhary, but expressed unwillingness of the Agency to the second stage of health reform from 1 April.

In his closing remarks Alexey Goncharuk said that his government “did not steal and systematically fought corruption from the first to the last day.” He drew attention to the fact that for the last time on the government “turned a lot of dirt,” and thanked the Ministers for what they withstood the pressure.

“I think we have a very good President, that he is a very honest man. For all the time I have not received from him any illegal command, not even a hint of any foul play,” said Alexey Goncharuk.

He expressed confidence that the government will continue, reports “Interfax”. “Six months is a very short period of time to assess the performance of any government, but I am sure that Ukrainians can already feel our work, for example, in their payment system. We actually did very much,” he concluded.

Alexey Goncharuk was appointed Prime Minister on 29 August 2019. On Tuesday evening the parliamentary faction of “servant of the people” voted to grant the application Goncharuk’s resignation and to appoint the head of Ukrainian government Denis Smagala, who held the position of Vice-Premier – Minister of the development of communities and territories.

The formation of a new government

On Wednesday, the Supreme Rada has appointed Denis Smagala for the post of Prime Minister of Ukraine. His candidacy, submitted by President Vladimir Zelensky, at the extraordinary session of Parliament voted 291 MP from 423. After the appointment of the Prime Minister Smigel will form a new government. Nominations of Ministers also approved by the Parliament.

On Wednesday the Verkhovna Rada endorsed the appointment of Dmitry Kuleba for the position of Minister of foreign Affairs of Ukraine on the proposal of President Vladimir Zelensky. For the appointment of the Kuleba head of the Ukrainian foreign Minister at the plenary session on Wednesday voted 288 deputies. According to the Constitution of Ukraine, the nomination of the Ministers of foreign Affairs and the Ministry of defence to the Parliament making the head of state.

Previously the foreign Ministry of Ukraine headed by Vadym Prystayko. In the new Ukrainian government, he became Deputy Prime Minister for European and Euro-Atlantic integration.

For the appointment of other members of the Cabinet of Ministers voted 277 deputies. Earlier Wednesday, Smigel introduced the candidates for Ministerial positions in his government, are still vacant four seats.

The new Prime Minister Denis Shmyhalou it has been 44 years. In 1997 he graduated from the Lviv Polytechnic Institute and became an engineer-economist. In 2006, Smigel went into the investment business. Three years later he was appointed head of the main Department of economy, investment, trade and industry of Lviv regional state administration. Later Smigel back in business.

The scandal with “wiretapping”

Prime Minister of Ukraine Alexey Goncharuk asked to resign in mid-January, but then President Vladimir Zelensky has not accepted the resignation. It happened after the scandal with “wiretapping” of senior officials.

15 and 16 of January on the YouTube channel “How to deceive the President,” there were three audio recordings where people with the voices similar to the voices of the Prime Minister of Ukraine, Deputy head of the national Bank and Minister of Finance, talking about the economic policy of the country and unflattering comments about Vladimir Zelensky. The video is signed as “History, as Alexey Goncharuk (Minister of Finance), Oksana Markarova (the head of the national Bank), Jacob Smoliy (NBU), Ekaterina Rozhkova (Deputy head of the office of the President of Ukraine), Yulia Kovaliv were going to the meeting a “stupid President” Zelensky”. These records, according to press reports, was made during an informal meeting of high-ranking Ukrainian officials held on 16 December 2019.

Officials allegedly discussed how best to convey to the President the essence of the processes occurring in the economy. Goncharuk attributed to the voice on the recording asks the audience to help him explain to the head of state, why the stronger hryvnia and how this might affect the state budget. Goncharuk allegedly also acknowledges that although he is “a complete ignoramus” in Economics, as it has a legal education, but the President is quite “primitive understanding of economic processes”.

The President needs to clearly explain what is happening in the economy, and that this explanation “looks very realistic,” said the man with the voice Goncharuk. “While the President has in his head is not the answer to this question is, it there be empty space, and it will arrive this crap on the topic of bonds. It hits him in the head just because he has a fog on this topic,” he said.

After the publication of “wiretapping” and the beginning of the scandal, the Prime Minister called the recordings installation which artificially creates the idea that the Prime Minister and his team do not respect the President.

Zelensky also demanded from law enforcement agencies two weeks to establish involved in recording conversations during the meeting, Prime Minister Alexey Goncharuk, Ministers and representatives of the national Bank of Ukraine. The President also demanded “to accumulate the necessary measures” to prevent such incidents in the future and technically to protect the information.