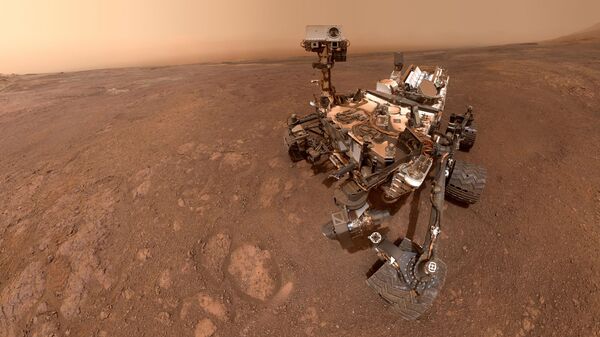 German havescientists conducted a study of the origin of teofanov — organic compounds discovered on Mars by the Rover “Curiosity”. According to the results of the work, sources of thiophenol could be bacteria. Article on this subject published in the journal Astrobiology.

The discovery of organic matter on Mars has a certain background. The first traces of organics in the Martian sediments were recorded by gas chromatograph — mass spectrometer automatic Martian stations “Viking-1 and Viking-2” in the 1970-ies. Instruments revealed harmatan and dichloromethane, which, according to scientists, could be formed by the reaction of organic matter with the perchlorate present in the soil of Mars. Later, while processing the data “Vikings”, it’s been suggested that Mars is also present an aromatic compound is chlorobenzene.

The presence of chlorobenzene was confirmed in 2015, in analyses of the Mars Rover “Kyuriositi”, which is found in the soil of Mars and other aliphatic, aromatic and Tipanova organic compounds.

Scientists now have no doubt that organic molecules present on the surface of the red planet. It remains to determine whether they are biogenic or abiogenic, is not related to life origins.

Of particular interest in this regard are tifany — aromatic compounds containing sulfur, which on Earth are commonly found in kerogen, coal and crude oil, as well as in stromatolites, and microfossils and some mushrooms.

German astrobiologists Jacob Heinz (Heinz Jacob) and Dirk Schulze-Makuch (Dirk Schulze-Makuch) from the technical University of Berlin believe that the detection corresponds to teofanov that once upon a time on Mars was life.

“If you have found tifany on the Ground, just would have thought that they have biological origins, but on Mars, of course, the bar of evidence needs to be slightly above — presented in a press release, the words Dirk Schulze-Makuch. We identified several biological pathways for teofanov that seem more likely than chemical but still need more compelling evidence.”

In the thiophene molecule of four carbon atoms and the sulfur atom located in the ring. Both of these elements are part of the biologically necessary for life components. In the classic version tifany formed during thermochemical recovery of sulfates with participation of bacteria. Nutrient such a scenario could well take place on Mars more than three billion years ago, when the surface of the planet was warm and wet, and was attended by microbial life.

But there is, although less probable, and abiotic processes that can lead to the formation of similar compounds — for example, meteor strikes or the spontaneous recovery process of sulphate at temperatures over 120 degrees Celsius.

Scientists hope that further missions to the Red planet, in particular, a Mars Rover, “Rosalind Franklin”, formerly known as “ExoMars-2020”, will bring new data that will allow to unambiguously answer the question whether bacteria involved in the formation of complex organic compounds on the surface of Mars. “Rosalind Franklin” will be equipped with the special analyzer of organic molecules using non-destructive method of analysis that allows to analyse large organic molecules in place.

Another method, which will be able in the future to confirm the biogenic origin of organic molecules, according to the authors, is the isotopic analysis of carbon and sulfur.

“Organisms “lazy”. They prefer to use the lighter isotope variation element, because it costs them less energy — explains Schulze-Makuch. — However, even if the next Mars Rover will produce this isotopic evidence, this still may not be enough to definitively prove that Mars exists or once existed life.”

Many are so skeptical about this subject that for absolute proof “required to send the astronaut who through a microscope will see a moving germ,” jokes scientist.