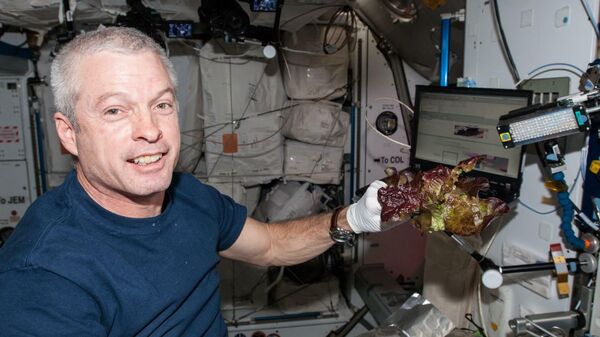 American scientists from the Space center. Kennedy in Florida completed a study of lettuce grown in space, aboard the International space station (ISS) in the period from 2014 to 2016. The findings suggest that the space lettuce is perfectly safe for human consumption, rich in vitamins and minerals and no less nutritious than terrestrial analogue. The study is published in the journal Frontiers in Plant Science.

B 2014-2016 Board MKC cultivated lettuce Lactuca sativa (red lettuce) from sterilized on the surface of seeds in the cameras equipped with led lighting and irrigation system. The cultures were grown for H5-56 days. The crew then ate some of the leaves, a rest was frozen and sent to Earth for chemical and biological analysis.

To obtain control samples in parallel, scientists were growing the same plants on Earth, in conditions as close to the conditions on Board the ISS, where regularly received information about the temperature, air composition and humidity.

The results of the research have shown that grown in space, the salad is protected from germs and is completely safe for human consumption, moreover, is not less nutritious. In composition it was similar to the terrestrial counterpart, but it was even more of minerals, such as potassium, sodium, phosphorus, sulfur and zinc, and phenolic molecules with antiviral, antitumor and anti-inflammatory properties. No less than in the earth the salad was and the level of anthocyanins and other antioxidants, which can protect human cells against damage from free oxygen radicals.

Researchers have also studied the microbial community of plants, since set is both useful and harmful microbes can significantly affect the suitability of plants for human consumption. For studying the communities of bacteria and fungi used DNA sequencing technology.

Despite the fact that the space lettuce was grown in low gravity and more intense radiation than on Earth, the researchers found in batches of the salad with the ISS more microorganisms than those that were grown on Earth, although the overall composition of microbes was similar. This surprised scientists, because they assumed that the space will only develop individual microbial species.

The authors note that none of the discovered space on the salad types of bacteria do not cause diseases in humans, and the number of fungi spores and mold on them was also within normal limits established for foods.

According to scientists, the encouraging results of the experiment open the door for experiments with other nutritious and tasty crops on Board the space station. Fresh vegetables should not only diversify the diet of the crew, but also to provide them with additional amounts of minerals and vitamins K, B1, and C. furthermore, the cultivation of vegetables in space will be an important practice for longer missions, such as the colonization of the moon or a Mapca.

“The ability to grow food in a sustainable system that is safe for consumption by the crew, will be vital when HACA will go to long-term space missions. For example, the cultivation of salad leaves few resources, a benefits from it is huge,” presented in a press release publishing the words of the first author Christina khodadad’s (Christina Khodadad).

Now the researchers sent to the ISS and other seeds for growing, including Kale.

“The international space station is a proving ground for future long-term missions, and these types of tests on crop growth helps to extend the set of candidates that can be successfully grown in microgravity. Future tests will examine other types of leaf crops and small vegetables such as peppers and tomatoes, to help provide additional fresh food for the diet of an astronaut,” says one of the authors of the study Dr. Gioia Massa (Gioia Massa).