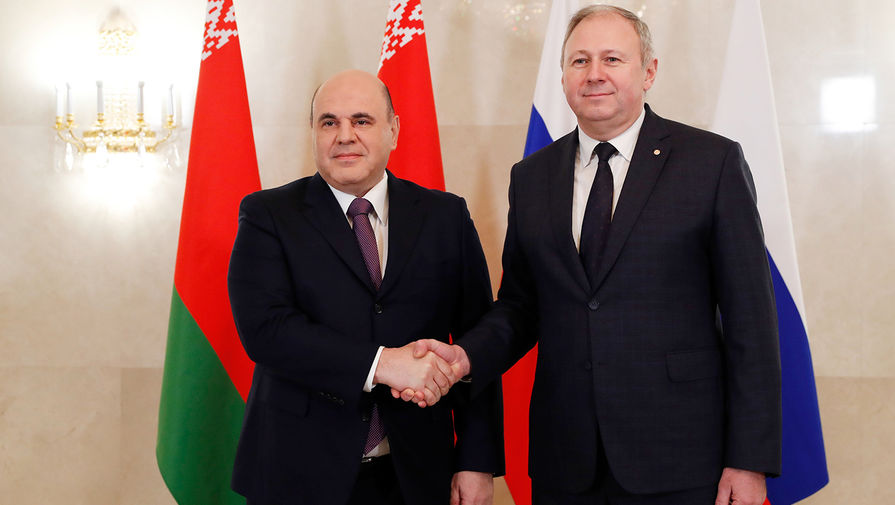 In Moscow have passed negotiations of Prime Minister Mikhail mishustina with his Belarusian counterpart Sergei Rumas. After the meeting, the Rumas said that Belarus will monthly to buy at least two tankers of oil from alternative sources, even if the negotiations with Moscow to bring about positive results. The Belarusian head of government stressed that he expects the resolution of conflicts with Russia given the fall in world prices.

The press service of the Russian Cabinet reported that the parties expressed willingness to strengthen the integration of the countries and agreed to continue contacts in this direction.

The Belarusian Prime Minister said that during the discussion of the draft strategy of development of the Eurasian integration until 2025 to reach agreement on two issues, including the issue of tariffs for transit of energy carriers in the framework of the EAEC, failed. At the same time managed to achieve “great strides” on this topic.

Rumas is confident that outstanding issues can be submitted for consideration of the presidents of the two countries. He also expressed hope for resolution of the oil dispute.

“We discussed with Mr Putin all bilateral cooperation issues that concern each of the parties, noted the Belarusian Prime Minister after the meeting. — Indeed, the situation recently changed, oil prices fell, and in this regard the Belarusian side presented the Russian new deals for oil companies”.

He also said that Moscow intends in the near future to hold talks with oil companies and give the final answer.

At the same time, he noted that Minsk plans to buy every month a minimum of two tankers of oil from alternative sources, even if the parties agree on the terms of Russian gas supplies. From the results of the negotiations depends only on the volume of purchases.

“Belarus has taken a decision that still at least one tanker at each factory [the Mozyr and Novopolotsk oil refineries] in a month we will take regardless of whether we agree with Russia or not, said Rumas. Because the issues of economic security, the issue of diversification was discussed, decisions taken”.

On March 6, Belarusian foreign Minister Vladimir Makey said that Belarus sees no reason to continue working with Russia on a “roadmap” for deepening integration until you have solved the issues of oil supplies to the Republic.

By the beginning of 2020, Moscow and Minsk failed to find a compromise in such a sensitive issue as the price of oil supplies. 1 January-Russian oil supplies were suspended.

Later Belarus have agreed to purchase 750 thousand tons of oil from the company Mikhail Gutseriev Safmar. In late February, the Minsk stated that, in addition, five more Russian companies are ready to negotiate. March 9, the press Secretary of the Belarusian concern “Belneftekhim” Alexander Tishchenko said that the five Russian oil companies started delivering oil to Belarus.

In March Azerbaijan would supply Belarus three tankers of oil with a volume of approximately 250 thousand tons. Belarus is negotiating with Kazakhstan. However, Kazakh oil is likely to be cost Minsk is more expensive than Russian due to the difference in duties.

The differences between the parties arose due to the fact that Minsk has expressed unwillingness to pay the premium for duty-free oil supplies, arguing that their losses from the tax maneuver Russia.

President of Belarus Alexander Lukashenko said that in six years the budget of the Republic will not receive $11 billion — all because of the tax maneuver of the Russian Federation. Budget losses in the oil industry from the reform in the year of 2020 Minsk estimates at $400 million.

February 21, Alexander Lukashenko said that the Russian President invited him by phone to offset taxes due to the tax maneuver Minsk’s revenues from export duties.

The Belarusian President said that compensation will be provided due to the decrease in premiums to the price of oil, which currently receive Russian oil companies for deliveries to Belarus.

Later, the Minister of energy Alexander Novak said that the award will each year be reduced by $2 per ton in proportion to the reduction of export duties. As reported by RIA “Novosti”, now the premium is $10 per ton. Thus, for five years, it may reset it.