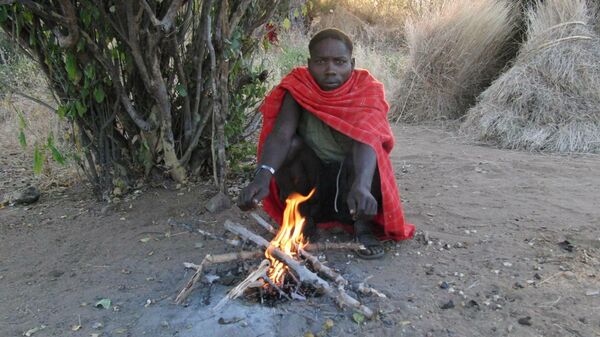 American scientists studying the African community of hunter-gatherers, came to the conclusion that squat or kneel more useful than sitting in a chair or on the couch. The authors believe that the posture in which the person is resting, affects the risk of cardiovascular disease and other health problems. The study is published in the journal Proceedings of the National Academy of Sciences.

A sedentary lifestyle characteristic of modern man, is associated with risks of development of many diseases caused by low muscle activity and delayed muscular metabolism. From an evolutionary point of view this is quite strange, because the adaptation of the techniques of conservation of energy should, in theory, give the mind a definite advantage.

To understand how resting and saving strength of the people before the invention of chairs and sofas, American scientists from the University of southern California watched the Tanzanian hunter-gatherers of the hadza tribe, whose way of life is similar to how people lived in the past.

“We tend to believe that human physiology is adapted to the conditions in which we evolved — presented in a press release of the University the words of the first author of the article David Raichlen, Professor of biological Sciences. — If the inaction was harmful, our evolutionary history has provided us with for this lesson, so much time.”

During the study, the hadza volunteers wore devices that measured their physical activity and recreation. It turned out that the people of this tribe spent in physical activity not so much time — little more than an hour a day. Despite the fact that it is three times more than the 22 minutes recommended by the Ministry of health of the United States, this is considerably less than scientists expected. In other words, our ancestors living in harmony with nature, as scientists say, was the high level of inactivity.

Observations have shown that people hadza are almost same sedentary lifestyle as people in developed countries, conducting stationary for about 9-10 hours a day. However, they have no signs of chronic diseases associated with prolonged sitting. The reason, according to the authors, lies in the fact, in what position they sit. During periods of inactivity people the hadza squat or kneel. Such provisions require a higher level of muscle activity than sitting on a chair.

“Despite the fact that the hadza have been long periods of inactivity, one of the key differences that we noticed is that the hadza often rest in positions that require their muscles maintaining a light activity level — squatting or on my knees,” says Raichlen.

In addition to tracking periods of activity and inactivity, the researchers used specialized equipment to measure muscle activity of the legs in various poses. Squat included greater muscle activity compared to sitting in a chair.

Scientists have suggested that light muscle activity requires fuel, which usually means burning fat, and therefore poses squatting and kneeling may not be as harmful as sitting in a chair. At least people have the hadza are extremely rare heart diseases and disorders metabolic characteristic of modern people from developed countries in the office, home and car seats 10-12 hours a day.

The authors urge residents of large cities to relax or to work, squatting or kneeling, but periodic rising and squatting, as well as a selection of some more active poses can be a useful practice to reduce the health risks associated with a sedentary lifestyle.

“Replacing the seat on the chair and the related muscle inactivity on a more sustainable posture of leisure can be a behavioral paradigm that should be explored in the future — said the scientist. — Squat is not an unambiguous alternative, but to spend more time in postures that, at least, require muscle activity of the low level, it may be useful to our health”.