It is easy to guess that the death penalty by hanging at all times been the most popular method of execution. Fast, reliable and most importantly accessible — to hang a man in any sufficiently high object or structure that can withstand the weight of the body.

But in the Middle ages when I was hanging a lot and with a taste for the slightest offense, needed something more durable, spacious and clear than the branch of a tree or beam with support. So there was Paris Montfaucon — the largest and most terrible gallows in the history of mankind. 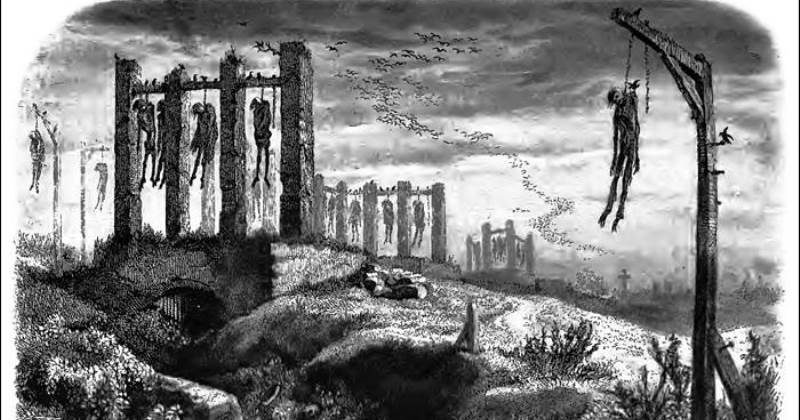 The full name of this hell’s invention — Gibet de Montfaucon. The gallows had its own name consisting of a word indicating location (mount mountain), and the owner of the land (count Faucon), generously provided a place for very necessary for Kingdom building.

However, many translate the name as Sokolinaya Gora that is not an error, as faucon in French is a Falcon.

Nobody knows the exact date when the North-West of Paris there was a terrible colonnade. We only know that Montfaucon was erected in the XIII century on the orders of king Philip IV the fair, which is popularly called for the eyes of the Iron. The king was a sharp temper and hung up enemies, guilty of subordinates, of criminals and tramps just right and left. 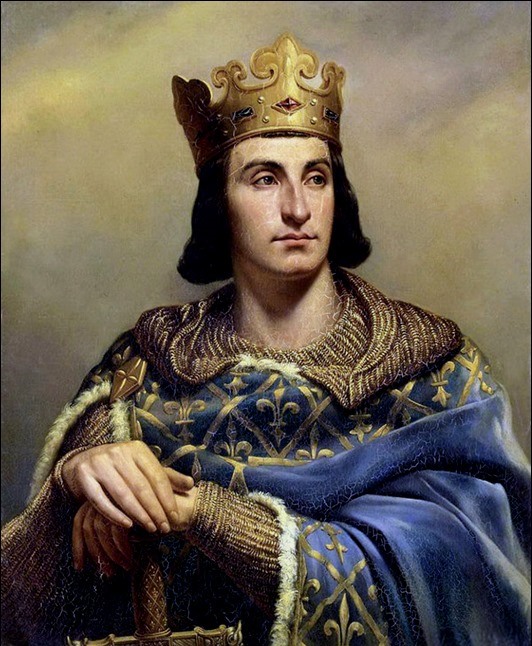 The king of France Philip IV the fair

The main place of execution of the commoners were in those days, the place de Greve, which is located at the quays of the Seine river port. The area does not always cope with the load, as well as in the Middle ages it was preferred not to remove the gallows from, the smell of rotting bodies wafting through residential and commercial neighborhoods. Montfaucon was called to “unload” the place de Greve, and at the same time to relieve the city authorities from having to dispose of bodies, which according to the law of the time, it was impossible to give to relatives nor Christian burial. 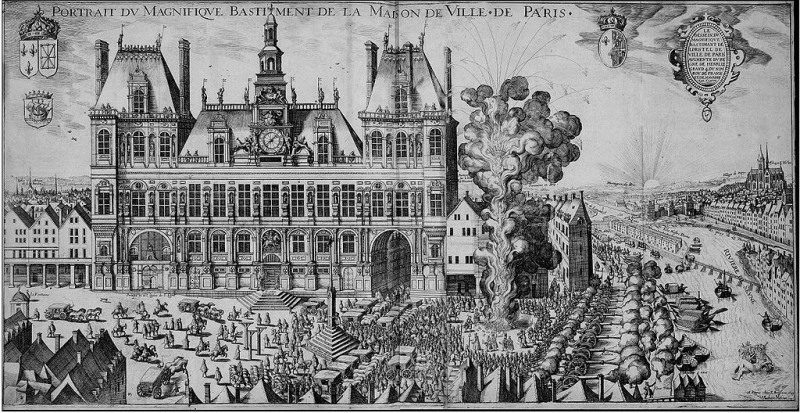 The place de Greve in Paris. In the center are clearly visible the gallows

So there was a “factory of death” Gibet de Montfaucon, designer and construction supervisor which was the king’s Advisor Angerran de Marigny. Here we must digress and mention that he is Monsieur de Marigny, several years after the completion of the work, became a “client” of this huge gallows, which much amused the Parisians.

Gallows was a building close to a cube shape, with a height of 12 m and 14 m at the sides On a high stone Foundation is located on three sides in the form of a colonnade, 16 massive pillars of badly hewn stone, which was covered in three tiers of stone beams. 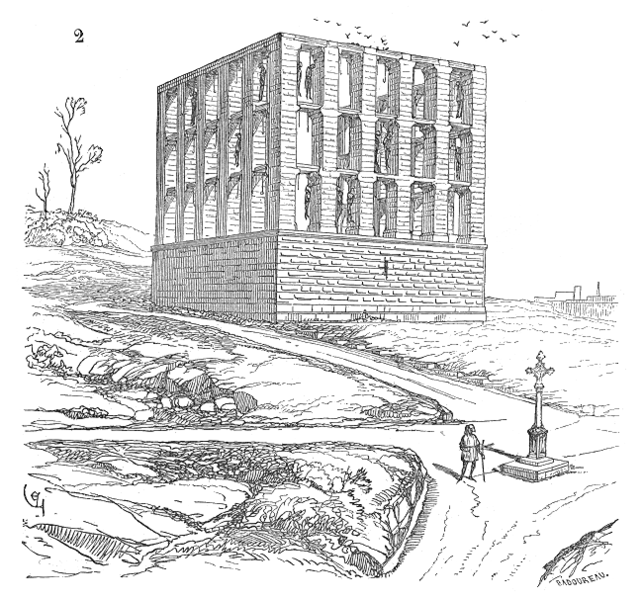 Thus Montfaucon resembled a three-storey building without beams and window frames, and replaced them in the apertures hung on chains executed. The similarity with the building of the reinforced door in the basement of the buildings which housed the stairwell to service tiers with gallows. Entrance and staircase occupied the fourth, not having the columns side of the gallows.

At the base of the Montfaucon was located the so-called ossuary well designed for the disposal of bodies. having hung the allotted time on the chains and the body was removed by the assistants of the executioner, and dumped into ossuary. Thus solved the problem of burial. From time to time when the well was filled with remains really clean. The key to the massive doors of Montfaucon was only one and his guardian was the city executioner. 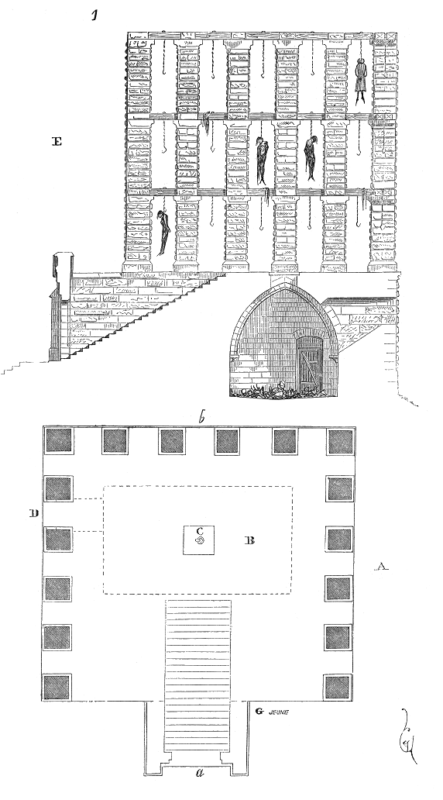 This well Victor Hugo has made a place of farewell Quasimodo and Esmeralda:

“After one and a half or two years after the event, completing the story, when in the vault of Montfaucon came for the corpse of the hanged man two days ago, Olivier Le Dan, to whom Charles VIII granted the mercy of being buried in Saint Laurent, more decent society, among the disgusting human skeletons found two skeletons, one of whom, it seemed, clutched the other in his arms”.

At the same time Montfaucon was able to serve 50 people, and when necessary even 90. The problem of free space was solved simply — sentenced to death were hanged at two in the cell. Sometimes, in times of wars and rebellions, was not enough, so after a few years there were two usual gallows, complementary to the main complex. 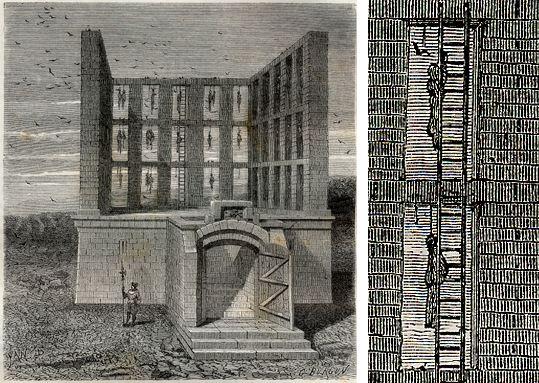 If you consider that Montfaucon was located on chalk hill, ruling over the neighborhood and never empty, it can be considered not only the instrument of execution, but also a great propaganda tool to safety of Parisians and visitors from trade-offs with the law. On the gallows constantly circling crows, and even used to the death of the inhabitants of medieval Paris, she was made the strongest impression. 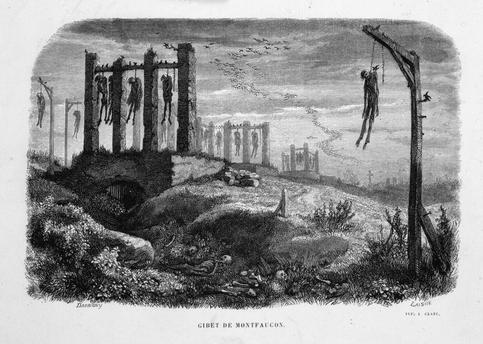 Incredibly, Gibet de Montfaucon served the kings of France faithfully for almost four centuries. On an ancient engraving depicting the execution of the king’s Treasurer in 1527, it is clear that from the majestic Montfaucon in the XVI century there are very few, but it is still actively exploited. The last execution at the gallows, representing virtually the ruins, took place in 1629. Good old Montfaucon worn out so that it became dangerous not only for rebels, thieves and heretics, but also for the executioners themselves. 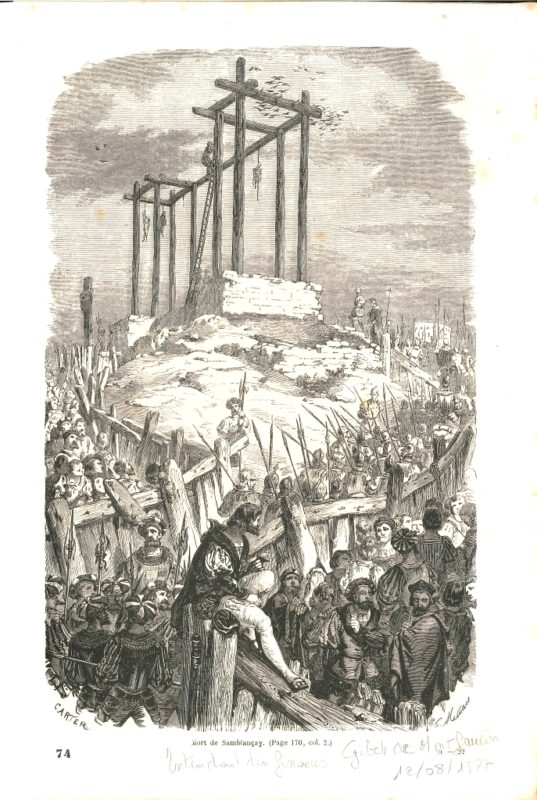 The penalty of the Treasurer of king Francis I of Jacques de Beaune, Baron Semblance, August 12, 1527

For several decades, not the most peaceful in French history, it was not to terrible design on the outskirts of Paris, and then came the guillotine, the crucial question for a split second and does not require costly maintenance. Montfaucon, who came in full decline, soon found himself within the city limits. Most likely, citizens of the Republic of the Enlightenment was bored of views on moss-covered colonnade, with fragments of chains, and at the end of the eighteenth century the gallows was finally dismantled.

Today, the place where the worst gallows of history is located in the heart of Paris, Parc Buttes-Chaumont in the 19th arrondissement.

Slovenia woman jailed for cutting off hand for insurance fraud