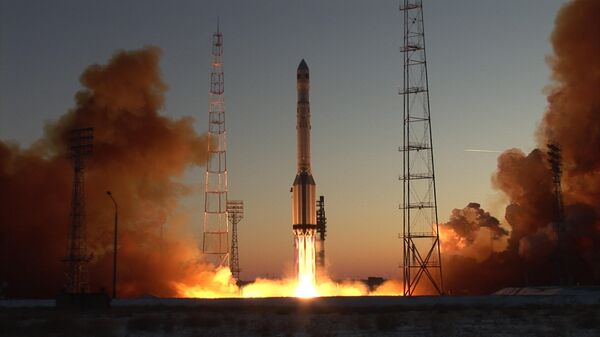 Carrier rocket “proton-M”, designed to launch the Russian-European ExoMars apparatus to Mars in 2022, recheck for the presence of low-quality components, similar to those that were previously detected in the rocket for launching communication satellites, “Express”, told RIA Novosti the General Director of the Khrunichev Center (the manufacturer of “Proton”) Alex Morocco.

“The carrier rocket “proton-M”, located on the Baikonur cosmodrome for the launch of the ExoMars mission, is currently undergoing additional quality assurance components. Regardless of the results of the inspection available on the three previously delivered to Baikonur carrier rockets, the company provides the readiness of the mission launch in 2020, and, in view of transfer, in 2022″, he said.

Earlier, the Russian Federal space Agency and the Centre for exploitation of ground space infrastructure (cosmodromes, the operator of Russia) through a system of quality control found in the rocket “proton-M”, intended for launching satellites “Express-80” and “Express-103”, the use of defective components. According to the newspaper “Vedomosti”, it was about the faulty bolts used for fastening pipelines, second stage carrier. Roscosmos said that the malfunction of the rocket will not return to Moscow, and will repair at Baikonur.

Rocket to launch ExoMars mission was to be launched to the red planet in July and August, but the launch is postponed for two years – in the fall of 2022. The decision to postpone the mission was made by Roscosmos jointly with the European space Agency.

In the framework of a specially held meeting of the heads of Roscosmos and ESA — Dmitry Rogozin and Jan Werner — agreed on the need for additional testing of the spacecraft with modified equipment and with the final version of the software. In addition, the parties acknowledged that during the final stage of preparation of the ExoMars mission, the progress of the works have been violated in connection with the General deterioration of the epidemiological situation in Europe.

“Joint project team of Roscosmos and ESA to consider the risks and the schedule of the mission conducted an assessment of all work required for obtaining permission to launch. Taking into account the recommendations of inspectors General with the European and Russian side specialists on the project ExoMars concluded that the testing required to confirm the suitability of all components of the spacecraft to launch to Mars, requires additional time”, – explained the reason for the transfer Morocco.

The main objective of ExoMars is to search for signs of past or present life on Mars, and to better understand the various periods of the existence of water on the planet.