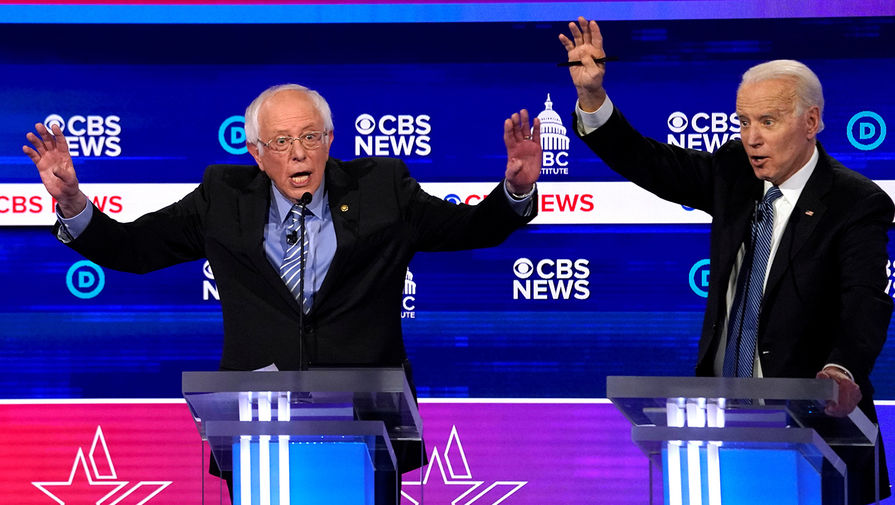 Joe Biden is the leader in primary elections in three States, leaving behind his only competitor, Bernie Sanders. However, the result of the former Vice President cannot be called a win, as far he showed only in one state. This prevents the Biden become a single candidate from the Democrats, and he has to compete not only with Sanders, but with the coronavirus. The increase in the number infected in the United States threatens to hold the next primaries and election campaign as a whole.

Former Vice-President of the USA Joe Biden has a strong lead in the primaries of the Democrats in Arizona, Florida and Illinois. According to preliminary data, the candidate ahead of his rival, Senator from Vermont Bernie Sanders in every state.

Biden was the clear winner of the primary election in Florida, he scored 61,9% vs. 22.8% for Sanders. In other States the situation is slightly more favorable to the Senator.

So, in Arizona, Biden received 43% of the vote, Sanders — 30%. In Illinois the same of 59.1% of voters-Democrats, supported the former Vice-President and of 36.1% voted in favor of the Senator.

The Problem For Biden

With the elections in these States, on the side of Biden 1147 delegates Sanders — 861. For the nomination for President from the Democratic party candidates need to overcome the bar in 1911, delegates, and more likely — the former Vice President. However, Sanders is not going to drop out of the race, as he has already informed his supporters.

The decision of stopping Senator Biden to the coveted status of a single candidate from the Democrats. Before the summer Congress of the party, where will be selected candidate for the post of President in the primaries will be awarded about 1,800 votes of the delegates, and it needs to support at least 765 of them.

But while Sanders is in the race, he takes votes in each state than greatly complicates the task for Biden.

According to CNN, the team of the Senator has already discussed his possible descent from the race, but so far no decision on this point is not accepted. While Biden, in his speech after the primaries talked a lot about unity and focused on those moments where it coincides with the proposals of Sanders.

“Senator Sanders and his supporters has been remarkable passion and perseverance in all these questions, and together they moved a fundamental conversation in this country. I know we have to do. Our goal as a campaign and my goal as a candidate is to unite this party, and then to unite the nation,” said former Vice President.

However, the Senator my opponent has ignored, as the outcome of the election. Sanders in his speech focused on “the main danger” for the United States — the new coronavirus COVID-19, and also pointed out the necessity of uniting Americans.

“It is extremely important that we were together. We are dealing with a growing economic crisis that will affect tens of millions of workers in this country,” he stressed.

The failure of the election

However, the new coronavirus threatens not only the loss of jobs, but the widespread failure of future primary elections. Infected already recorded in every U.S. state, according to the latest data, the virus infected more than 6 thousand people. Thus died in the United States is already 108 people.

The rapid growth in the number of cases calls into question the appropriateness of the voting events. In the United States is growing more and more panic, people prefer isolation, not elections.

It has already influenced elections in Arizona, Florida and Illinois.

Initially the vote was also to pass in Ohio, but the state government at the last moment refused to hold the elections for security purposes. Such disputes have arisen in Illinois, but in the end the vote did take place, though with a number of problems.

So, some of the polling stations in the state, according to local media, opened with a significant delay, because the workers simply refused to come to work on the background of the spread of coronavirus.

In this case the primary elections have already suffered at least three States — Georgia, Louisiana and Kentucky — the local authorities pushed the date of the vote closer to the summer, although it is unknown when the pandemic will decline. Such measures are being actively discussed in other States, which raises the question about the fate of the campaign.

However, this is a problem only for Democrats because the Republicans have a candidate already selected the actual. As expected, it will be a President Donald trump.

The American leader has already enlisted the support of the necessary number of delegates for his nomination from the party, so it is unlikely that fears of postponing the elections.