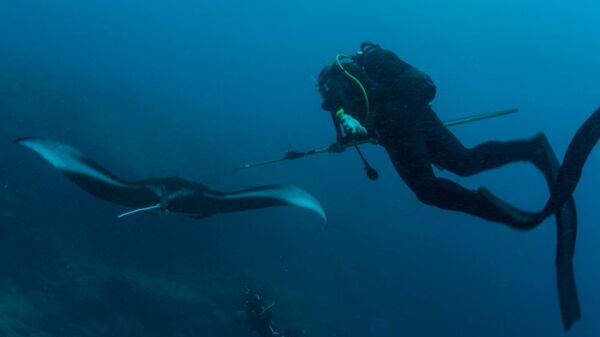 Biologists observing the behavior of manta rays off the coast of New Caledonia, found that these animals on a night dive to a depth of from 300 to 672 meters. Scientists attribute this to the lack of food in the coastal zone. The study is published in the journal PLOS ONE.

Reef Mobula manta alfredi is a species of stingrays of the family alekovich. Their number is declining worldwide, primarily in connection with the uncontrolled harvesting of fish and other marine life. Manta rays themselves are not the target of fisheries, but any violation of the integrity of ecosystems leads to the breakdown of the food chain. Animals simply do not have enough food. The international Union for conservation of nature awarded to this species conservation status “Vulnerable”.

Biologists from the University of New Caledonia with new Zealand colleagues studied the spatio-temporal dynamics of individuals Mobula alfredi off the coast of New Caledonia, nine of them by installing a satellite tag that allows you to control the movement of animals. Before marking each manta was identified using the method of photo identification was determined as the size, sex and maturity of individuals.

Pop-up satellite tags, or labels satellite telemetry PSAT is a widely used tool to control small-scale horizontal and vertical movements of marine animals and their use of habitat. However, this type of research for reef manta rays off the coast of New Caledonia has never been used.

The results showed that all tagged manta rays have made dives to much greater depths than scientists expected. The record was a dip at 672 meters, 200 meters deeper than the previous maximum depth of immersion manta rays. It should be noted that this is a record diving depth of mant not only for the region but for the entire world. Most of the deepest dives occurred at night.

Since manti is a large marine plankton-feeding animals, virtually all of their motor activity is subject to search of food. Seasonal or long-term presence of species in a particular area usually due to high local productivity and food availability.

Scientists suggest that manta rays began to dive to great depths in search of food so as the zooplankton abundance in the surface waters surrounding the coral reefs of New Caledonia reduced.

The new data, according to the authors, it is very important to develop conservation strategy of this vulnerable species, as they give new information about the depth range of its representatives. Today declared a protected area, only the coastal waters of coral reefs, which are considered to be habitat area of reef manta rays. Now it is clear that to ensure long-term survival of the species in a protection zone where restrictions are imposed on fishing, you must enable and the deep water, where the animals hunt for their food.