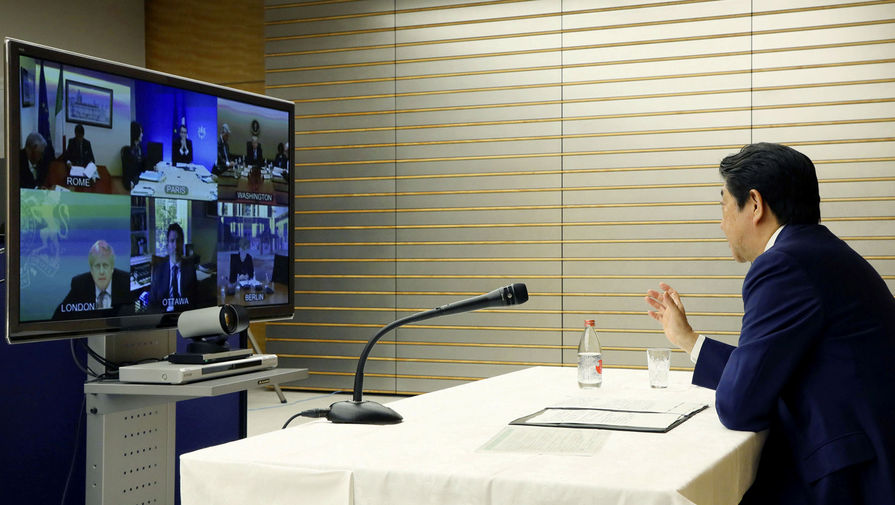 The foreign Ministers of member countries of the G7 agreed on a package of joint measures to counter the global pandemic of mers. Primarily they will focus on medical issues and on economic measures to support the economy. Like many other diplomatic events of recent days, the meeting was held in an online format.

The foreign Ministers of the countries “Big seven” (G7) held a video conference, which agreed on the main areas for joint work on combating a global pandemic coronavirus. This was at the end of the talks said the foreign Minister of Germany Heiko Maas.

Was originally scheduled meeting of Ministers “the seven” in the American city of Pittsburgh, however, in connection with the coronavirus pandemic, it was decided to change the format of the summit. According to the latest data, only in the world of coronavirus has infected more than 445 thousand people.

In this regard, Maas noted that in the first place before countries face the challenge to cope with the medical consequences of the spread of the virus, including through the creation of medicines and vaccines, limit the spread of the disease and to support countries that are worse than others are protected from the pandemic.

The second important direction of joint work of the G7 countries was called to overcome the economic crisis caused by the pandemic.

Member States of the “Big seven” intend “to formulate a joint international response to protect global trade, the current rules-based”.

As noted by Maas, anti-crisis measures was proposed by Germany, together with UK. However, following the talks, the topic of coronavirus was also raised by US Secretary of state Mike Pompeo.

According to him, the meeting was a lot of discussion of “campaign of disinformation”, which seems to lead China to the situation with coronavirus. “You see in the social networks and from senior Chinese officials that it was alleged in the United States. It’s just crazy. Now China began to sell fewer products and wants to put himself in the best light, trying to find the culprit.

This is not the time for apportioning blame. This time in order to find a solution,” said Pompeo.

In addition to the coronavirus of the foreign Ministers of the G7 countries discussed and other relevant issues. In particular, the sides exchanged views on the situation in Libya, the internal crisis in Afghanistan and the possibility of providing Syria with humanitarian assistance.

This “online meeting” of foreign Ministers was the first of its kind. On 16 March, the G7 leaders also via videoconference discussed the possibility of the cancellation of the summer Olympic games in Tokyo. In the end, Prime Minister Shinzo Abe has proposed to move the Olympics and the IOC has given consent.

G7 summit to be held in June at the residence of the US President in camp David, is also cancelled. Instead, the White house has offered to hold talks by video-link in April, may and June.

Their top priority members of the “sevens,” then declared the fight against the coronavirus and minimizing damage to the global economy due to the pandemic.

“By working together, we will work to eliminate the health and economic risks posed by pandemic COVID-19, and will create a basis for rebuilding a strong, sustainable economic growth and prosperity” — said in a joint statement, G7.

The spread of coronavirus has become a cause for the emergence of new contradictions between countries. Europe, for example, dissatisfied with U.S. attempts to lure a German company CureVac, which is developing an experimental vaccine against coronavirus. However, the next day after the meeting of the leaders of the G7, representatives of the company denied this information

As stated by CNN economic adviser to trump, Larry Kudlow, all participants “seven” agreed “to do everything necessary” to fight the pandemic as a medical point of view and economic. According to him, negotiations were held in a very supportive environment:

“The degree of cooperation, coordination was fantastic.”

On Monday held a teleconference of Finance Ministers of the G20.

“A teleconference of the Ministers of the G20: the confirmation of the serious economic impact of health crisis on global growth, financial support to developing countries, preparation of a common strategy to overcome the crisis”, — wrote in his Twitter Minister of economy and Finance of France Bruno Le Mayor.

As a result of negotiations, the Finance Ministers have agreed to develop a “plan of action” to respond to the pandemic, which is expected to trigger a global recession.

Due to the introduction of quarantine measures in most countries, many people cannot work, medium and small business have problems, many have lost their jobs. For some countries such crisis tendencies can significantly affect the economies of, respectively, the problem requires a coordinated response. As a result of negotiations the parties agreed in terms of the epidemic of the coronavirus to maintain expansionary monetary policies to increase money supply, as long as it is needed.

The question remains methods to help the victims of the virus countries, such as Italy and Iran.

In Italy as of March 25, recorded a 69.1 per thousand cases of infection with coronavirus. Of these, 6820 cases proved fatal, yet 8326 patients recovered. Hospitals across the country are overcrowded, doctors cannot cope, protective equipment and medical ventilators to critically lacking. Rome hoped to help the members of the EU, however, European countries are afraid to follow the path of Italy and with the provision of assistance was not in a hurry.

In General, the first response of the EU to the coronavirus has not been a coordinated response from Brussels. Each member of the Commonwealth acted for the reasons, an increasing number of countries closed their borders to each other. Only 17 March, the European Union closed the borders of the Schengen area, although the virus has already entered and is widely distributed within Europe. The decision, by the way, was the result of an extraordinary summit of heads of EU countries, which was also held in a videoconference format.

The number of cases of infection with coronavirus in Iran reached 27 thousand, of which more than two thousand fatalities. Iran was offered help from the United States, but relations between the countries remain hostile after the introduction of sanctions by Washington against Iran. Because of them, the spiritual leader of the Islamic Republic Ayatollah Ali Khamenei rejected the U.S. humanitarian assistance.

To predict how long a pandemic is now impossible. However, the world has to get used to the limitations of coronavirus, and to adapt to them.

The holding of summits and international negotiations via video link — the only way to pause the communication between the two countries, which is extremely important in the current environment.

“The online conference are an effective replacement is not meeting as such, but effective substitute for the lack of the meeting.

If we choose between a rescheduling of the meeting, the disruption of the meeting or postpone the discussion is generally for an indefinite period, then, of course, online is an effective substitute in such a scenario,” — said in a conversation with “Газетой.Ru” the Dean of science, faculty of world economy and world politics HSE, expert of the Valdai club, Anastasia Likhacheva.

However, she notes that, if we are talking about crucial topics concerning safety, or issues related to crisis management, “which require so-called personal chemistry, online plays”.

“Between the military, there are permanent forms of communication, which involve the solution of urgent questions. In such cases, the leaders are not involved, problems are solved by qualified specialists. The role of the leader is the creation of a political superstructure on issues of national security. Here online loses personal meetings.

At least until we have grown a generation of political leaders, for whom online communication is almost equally familiar, and personal,” — said the expert.

However, in the circumstances, negotiations via video link are the only possible and not the worst option. However, the new format of the international negotiations still deprives political leaders significant diplomatic tool.

“What online formats can not give, so this is the solution of the backstage things. With this online so that you can manually. The value of open personal communication only increases, which actually show the current antivirus measures,” — said Anastasia Likhacheva.