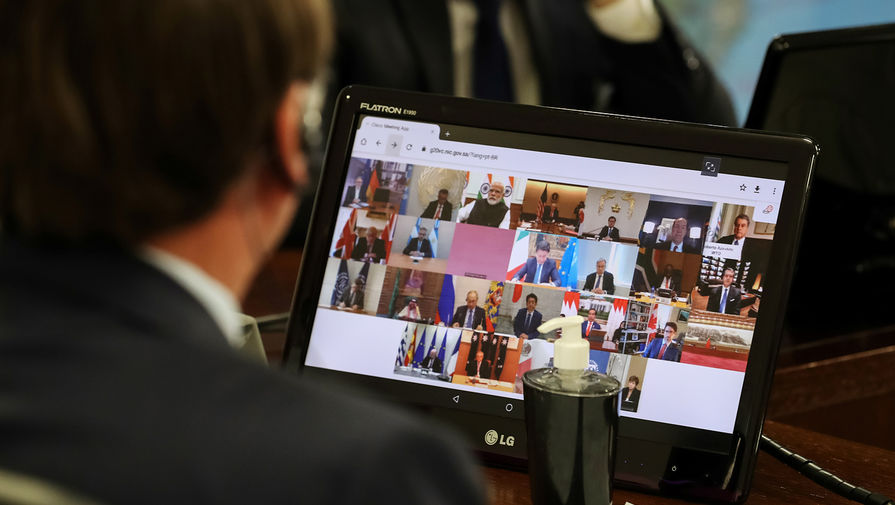 G20 members confirmed their commitment to mutual cooperation to counter the spread of a new type of coronavirus. The parties agreed to invest in the global economy of $5 trillion, as well as to coordinate action to support a free, stable international trade. Russian President Vladimir Putin offered to lift sanctions against those countries that have been hit hardest from the coronavirus.

March 26 was held the first ever summit of the G20 in the format of video conference. The participants agreed to invest $5 trillion into the global economy to overcome the consequences of the pandemic coronavirus.

In addition, the G20 leaders came to an agreement on the allocation of the world health organization (who) funds to fight the disease. The competence of the organization should also be expanded.

The final statement reports on the commitment of G20 members to “save lives and to protect their income and jobs, the preservation of financial stability.” This country is ready to “present a United front in the fight against the pandemic coronavirus”.

In addition, the G20 leaders called for coordinated action to support a free and stable international trade in the current crisis.

“We confirm our aim to ensure free, fair, non-discriminatory, transparent, predictable and stable conditions for trade and investment and keep our markets open,” the statement said.

Outcome of the summit was the agreement on joint efforts to fight the pandemic together with who, the United Nations and the International monetary Fund. The G20 asked the IMF and the world Bank to inform about the economic consequences of the pandemic and the International labour organization and the OECD to monitor how the fashion industry affects the employment in the world.

The summit originally was to be held in Saudi Arabia in November. However, the situation in the world in pandemic coronavirus, has created an acute need for close communication with world leaders.

According to recent reports, the world of recorded 499 230 infections. Many countries have introduced strict quarantine measures, which adversely affects the economy. This, in turn, generates a request for a coordinated response countries.

Remains unresolved and the issue of providing assistance to the States in which the situation with coronavirus peaked is Italy and Iran, which can not cope on their own with the pandemic.

The summit was chaired by the king of Saudi Arabia Salman bin Abdulaziz al Saud. Opening the meeting, he expressed the hope that countries will be able to rally before the major problem. In particular, Salman pointed out that the efforts aimed at finding a vaccine should be expanded. The king of Saudi Arabia also believes that an emergency G20 summit must create the conditions for the restoration of confidence in the global economy.

“The group able to work together to overcome the crisis, because the pandemic puts a spoke in the wheel of global development and global growth — said Salman. — Our duty is also to assist developing countries and improve their infrastructure to overcome the current crisis.”

In General, the statements of all the leaders concerned the need for coordination and development of measures to minimize damage to the global economy.

The President of South Korea, moon Jae-In has also taken the initiative to remove restrictions on border crossing for “significant” in the fight against the pandemic people such as scientists, medical professionals and people of business. Chinese President XI Jinping has called for the repeal of the tax duties and ensuring the free exchange of goods to promote the global economy.

“The epidemic has dealt a serious blow to global production and demand. All countries must work together to carry out the macro policies in order to create momentum and to stop the slowdown in the global economy, — said the Chinese leader. — You must maintain effective fiscal and monetary policy, strengthen control and consistency in the financial sector and jointly safeguard the stability of the global production chains”.

As expected, raised the issue of revision of sanctions policy. The President of Russia Vladimir Putin urged to cancel sanctions against those countries where there is a crisis situation. According to the Russian leader, the pandemic may lead to more serious consequences than the financial crisis of 2008-2009.

“Much is now said about the need to ensure supply chains is certainly important. But it is equally important during the crisis to create a so-called green corridors, free from trade wars and sanctions, mutual supplies of medicines, food stuffs, equipment and technologies”, — said Putin.

This situation has arisen, for example, in Iran. The leadership of this country has declared that from-for sanctions of the US regime in Tehran can’t get additional medication and medical equipment. Washington also said that humanitarian aid is not subject to sanctions.

Moreover, as noted in conversation with “Газетой.Ru” program Director club “Valdai” Ivan Timofeev, the restrictive measures do have a negative impact on some countries ‘ efforts to fight the pandemic.

“These sanctions make it difficult a variety of transactions with foreign counterparties and hinder the supply of humanitarian goods and any other products that can be somehow popular in the fight against coronavirus. In today’s world, the vast majority of sanctions applied in a unilateral manner without proper consideration and approval in the UN security Council, — said the expert. Unfortunately, this appeal is unlikely to resonate primarily the United States — one of the main initiators of sanctions. In Washington will say that this is impossible.”