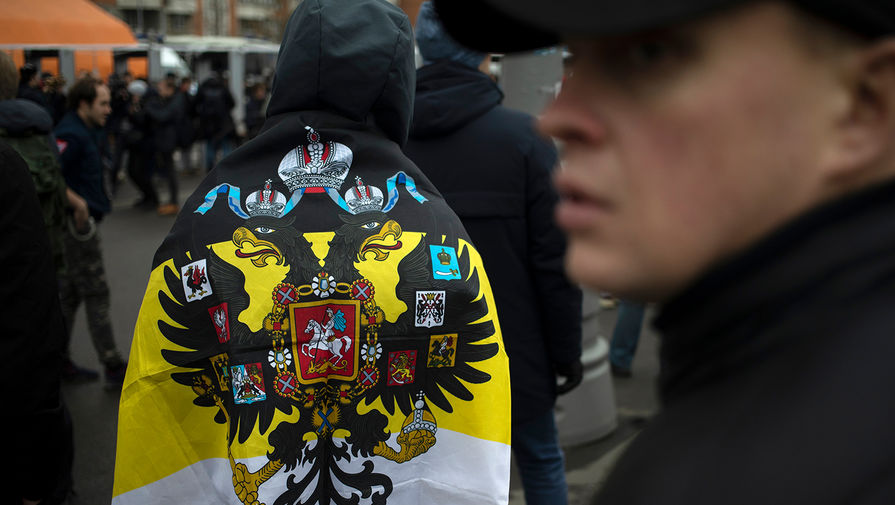 USA made “Russian Imperial movement” in the list of terrorist organizations. This is the first case when the U.S. recognizes as a terrorist Association that is not associated with Islamism. Experts believe that such a step may be associated with the foreign policy interests of the United States and the upcoming presidential election.

The US state Department has made “Russian Imperial movement” (REED) to the list of terrorist organizations. On 6 April, said the coordinator of the office for combating terrorism Nathan sales.

Entering the list means that the property REID in the United States, if such exist, will be frozen. Prohibits any contacts and transactions with the representatives of the movement. Now was a blocked page by REED in social networks Facebook and Instagram. In addition, for the three people whom the US state Department has called the leaders of the movement — Stanislav Vorobyev, Denis Gariev and Nicholas Trusalova — will be imposed personal sanctions.

However, as indicated on the page “Russian Imperial movement” of “Vkontakte”, Truslow 2019 is not a member of the organization.

This is an unprecedented event for the United States, as the representative of the state Department.

Still in the list of terrorist organizations, Washington was made mostly Islamic extremist groups.

U.S. authorities believe that the basis of REID, are the principles of white supremacy or white Suprematism. And this is the first time when the supporters of such ideas are declared in the US by terrorists. The former head of the national security division of the US Department of justice Mary McCord in a commentary for The New York Times called the decision “important.”

By the way, that the international character of the activities of the “Russian Imperial movement” served as the formal reason for declaring its members terrorists.

Sales claims that representatives REID are actively trying to “unite like-minded Europeans and Americans in a common front against their perceived enemies.” He points to REED’s connection with the Swedish “Nordic resistance movement” — the organization responsible for terrorist acts in Gothenburg in 2016 and 2017.

Then the Swedish radicals planted bombs near the premises of left-wing activists and twice at the places of residence of refugees. According to the Swedish Prosecutor’s office, the perpetrators of the attacks allegedly were trained in “military camp” REED near St. Petersburg.

Furthermore, it is known about the cooperation of the “Russian Imperial movement” with the Traditionalist labour party — far right organization, advocating from the standpoint of Christian nationalism and white Suprematism. In 2017 in Washington, and Gettysburg took place the meeting of representatives of the two movements.

Announcing REED terrorists, Washington has urged Russia and other countries to take appropriate measures against the organization.

“We call on Russia to fulfill its obligations to combat terrorism. We ranked this group to terrorist organizations, we urge our partners around the world, including the Russian government, take the threat as seriously as we perceive it,” said sales.

Thus the representative of state Department did not answer the question, can Washington a formal request to Moscow with the request to take measures against the movement.

In Russia currently, the “Russian Imperial movement” is not related to the list of extremist organizations.

This official website of the movement and of printed organs REED are included in the list of extremist materials Russian Ministry of justice.

The head of Fund of studying of the USA Franklin Roosevelt MSU Yuri Rogalev in conversation with “Газетой.Ru” noted that the ad REID a terrorist group — “this foreign cuisine to a greater degree.”

“It’s more of Russian-American relations. Easing or tightening. They are ready to meet, and somewhere in there,” — said the expert.

In his opinion, to associate the contact with REID in the lists of terrorists with the upcoming presidential election is not: “On these lists even one mention will not be in the United States.”

The other view is shared by the expert of the Russian Council on international Affairs, americanist Alexey Naumov: “Now the American society after shooting in new Zealand Christchurch, us Charleston and other attacks began to demand inclusion in the lists of extremist right-wing militants. Besides, statistics show that in recent years the number of victims of far-right terror has exceeded the number of victims of Islamist terror”.

About it spoke and Nathan sales. He noted that countering the threat of white Suprematism is the highest priority for the current us administration. Sales recalled the statement of US President Donald trump, which was made after the mass killings at Texas El Paso in August 2019:

“One voice our nation needs to denounce the racism, bigotry and white Suprematism. These sinister ideology must be defeated.”

According to Naumov, to meet public demand considered the possibility of inclusion in the list of terrorists larger and more radical groups Atomwaffen Division.

“We can say that this decision is part of the campaign trump engagement of undecided voters. The fight against right-wing terrorism can support just moderate electorate. He counteracts the propaganda that he is the President, a racist and a Nazi. This is a decision from which there is no negative impact on the U.S. at all” — sums up the expert.