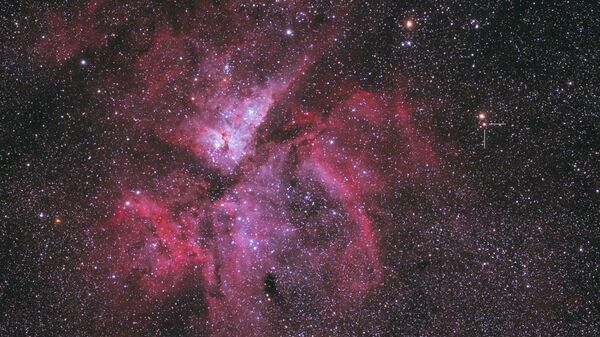 The results of the observations of the flash of a new star V906 Keel showed, that the powerful glow was the result of shock waves. They generate gamma rays, which cause luminescence in the visible spectrum. The results of the study, which was attended by Russian scientists from the State astronomical Institute named after P. K. Sternberg, Moscow state University, published in the journal Nature Astronomy.

In 2018, an international team of scientists, uniting researchers from 40 research organisations, observed the flash of a star system new V906 Carinae, which is from us at a distance of about 13 000 light-years away in the constellation Carina.

A new star — a sudden short-lived enlightenment previously inconspicuous star. This phenomenon usually occurs in the system, consisting of a white dwarf and a companion star. On the surface of a white dwarf does not go thermonuclear reactions, and it is a dense slowly cooling stellar bunch of ashes, not much exceeding the size of the Earth.

In the system formed hydrogen flow, the current from the outer layers of the companion star to the white dwarf. The gas accumulates on its surface until, until not achieved the critical temperature and pressure. This leads to an explosive thermonuclear reaction in the layer of hydrogen and the formation of a shock wave — a sharp change of temperature, pressure and density. The explosion disrupts the substance of the outer shell of the white dwarf in the surrounding space. With each such event releases energy, from 10 to 100 thousand times the annual energy from the Sun. Astronomers discover each year about 10 stars in this class in our Galaxy, but this case V906 was special.

Unprecedented observations of the flash of a new star in 2018, three satellites and space telescopes NASA’s Fermi and NuSTAR, as well as canadian satellite BRITE-Toronto has allowed the first direct evidence that a large part of the visible light of the explosion had originated as a result of shock waves. The results were supported by observations with several ground-based telescopes.

Space telescope NASA’s Fermi, designed for the observation of remote objects in the spectrum of gamma radiation, recorded the brightest gamma rays ever observed from a new one. They appeared around the same time as flashes of visible light. This pointed to the fact that shock waves during the outbreak, which produces more light than the continued thermonuclear burning on the surface of a white dwarf.

Satellite observation of BRITE-Toronto in the visible range clearly confirmed this view. Every day he returned to c the orbit of the Earth about 600 measurements of the brightness changes of the system.

“During the peak of brightness BRITE-Toronto recorded eight short flashes of light, each was almost two times stronger than the previous one — are in the press release of the Russian science Foundation, which supported research by its grant, the words of one of the authors Kirill Sokolovsky of the State astronomical Institute named after P. K. Sternberg, Moscow state University. We saw hints of these developments in ground based measurements, but has never seen them so clear. Usually we monitored the stars of this class from the ground by using a much smaller number of observations, in addition, measurements often have large breaks and are therefore unable to fix some quick changes”.

Now with the help of shock waves, scientists can explain powerful radiation caused by the merging of stars or supernova explosions and much larger explosions, such as the absorption of stars by black holes.