Nikolay Protopopov. Burning Europe, two somknuvshegosya front and the presentiment of Victory — exactly 75 years ago, April 25, 1945, on the Elbe river in Germany, shook the hands of the Soviet and American soldiers. This eagerly awaited on both sides. But then the way the allies dispersed. About the remarkable events on the Elbe and the secret plans of the British against the Americans in the material RIA Novosti.

In mid-April 1945, the Red army and the Anglo-American troops were advancing rapidly towards each other. Night 16 of 1st Belorussian, and then the 2nd Belorussian and 1st Ukrainian fronts attacked Berlin. The outcome of the war was a foregone conclusion, as the fate of Nazi Germany — the winners had to divide it into zones of occupation. This Chapter States the coalition has determined the following in 1944: the East was occupied by the Soviet troops, the West — American and English, a little singled out France.

Meet was on the Elbe. Preparing for this carefully and have taken all measures to avoid incidents, accidental mutual shelling, artillery strikes or bombing. The staffs clearly delineates the areas of aviation, signals for red and green flares to the visibility of armored vehicles struck the white stripes.

First contact mounted radio operators — they have taken and passed each other messages in Russian and English. Twenty-fifth day of April at 13:30 a patrol team of Americans under the command of Lieutenant albert Kotzebue went to the river and saw on the opposite Bank of the Soviet fighters. Making sure that it is the allies, not dressed Germans, the soldiers crossed the river on the boat and introduced himself as the detachment commander of the red army senior Lieutenant Gregory Goloborodko.

“We got out of the boat, wrote in his memoirs Kotzebue. Seemed three Russians and returned to us. It was Lieutenant Goloborodko, Sergeant Alexander Olshansky and photographer with the rank of captain.” 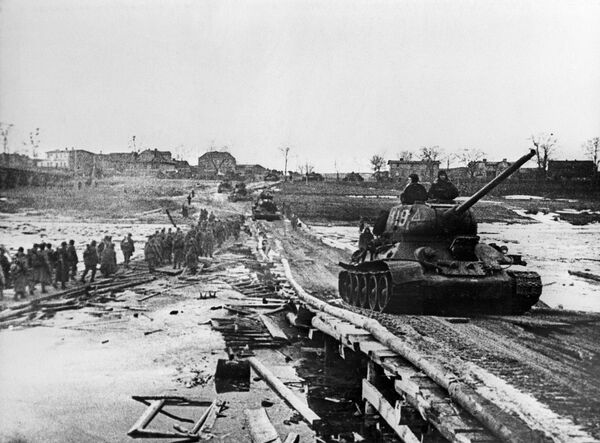 Historical, officially recorded meeting of allied troops took place two hours later, just North of — the city of Torgau. On a dilapidated bridge, the platoon commander of the 58th guards rifle division Alexander Silvashko, welcomed the commander of the reconnaissance of the 69th us infantry division by William Robertson. To identify yourself, the Americans hung in the Church belfry USA flag hastily made from sheets. Stars and stripes painted with potassium permanganate.

Robertson described the events this way: “About the middle of the Elbe river Russian and I slid down the huge, V-shaped, bending of the beam. This was a symbol, as the letter V means victory. But at this point we didn’t think about it. Russian was a Sergeant, his name was Nikolay Andreev. We shook hands, patted each other on the shoulder, trying not to fall in the flowing water of the river. Was about 16 hours.” 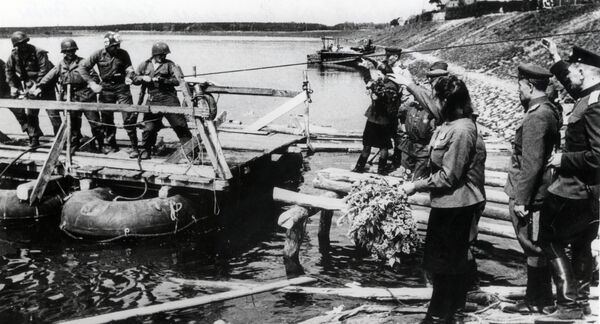 A meeting of Soviet and American soldiers on the Elbe

Moscow saluted the meeting on the Elbe 24 salvoes from 324 guns. The solemn event was held on times square in new York.

“It was the peak of the relations of the coalition for the time of the Second world war, says RIA Novosti scientific Director of the Russian military historical society (RVIA) Mikhail Myagkov. — Germany was divided, the Nazis could not effectively resist.”

American and Soviet generals very responsible approach to the training of personnel in the area of contact with the allies. So, of Moscow received a special Directive requiring officers and soldiers to maintain strict discipline and monitor the appearance. After receiving an invitation to the celebration from the Western comrades — in-arms- not to give up. Then organize a return event, to treat the allies politely and pleasantly. At the same time to convey to the Americans any information about the future plans of the red army was strictly forbidden.

The us army published a special brochure about some Russian customs. For example, soldiers are encouraged to shake hands when meeting with the red army, at the concert to clap and whistle in approval, as is customary in the United States.

“Americans are very warmly recall the Ukrainian borsch, Siberian pelmeni, caviar and, of course, strong drinks — continues softly. They always tried to take the memory with some sort of souvenir, a star from the caps or a button off of his jacket. The atmosphere in General was joyous — it was a warm Sunny weather, everywhere smelled of lilacs. In the air I felt the imminent end of the war.”

However, it was not without oddities. So, during the reception of the Soviet delegation to the American band played the “Internationale” — the owners didn’t know that in the USSR in 1943 approved the new anthem. One of the common eating of the Soviet officer raised his glass to the health of Stalin and Roosevelt who had passed away. However, these misunderstandings did not pay attention. 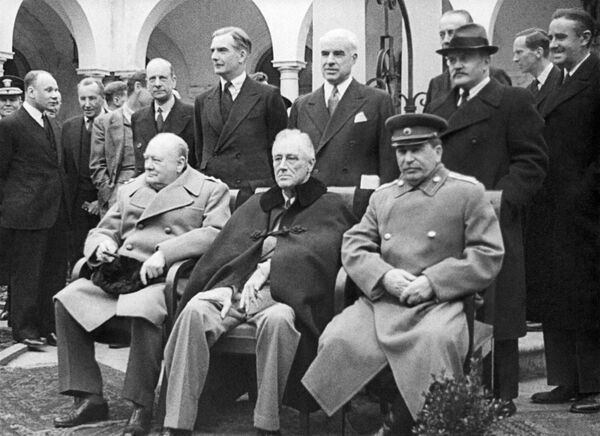 Marshal Ivan Konev invited the commander of the American group of General Omar Bradley. On the way to the Soviet headquarters of the American commander said, as clearly and correctly girls regulirovschitsa directed traffic flows.

General Bradley gave Konev automatic and the jeep “the jeep,” saying in a joke that will pay money for it for the next 20 years after the war. The American recalled: “Russian officers met us with noise and fun. Vodka and endless toasts for the Victory piled down many officers and generals — Soviet and American”.

Konev, in turn, thanked colleague with a gun with a rifled inlaid handle and the don stallion, who greatly valued and it went on from 1943. The way to Elba was long for both armies, but especially difficult it was for soldiers of the red army, which took the entire striking power of the German war machine.

“From 1942 the allies concentrated on the North African and Pacific theatres of war, says softly. — And the Red army crushed the main forces of the fascist bloc on the Eastern front. We advanced to the Elbe from the walls of Moscow and Stalingrad, after the battle of Kursk, the crossing of the Dnieper and the liberation of the European countries”.

The allies long to open a second front, although Roosevelt had promised it to the people’s Commissar Molotov during visits to London and Washington in the spring and summer of 1942. After landing in Normandy on 6 June 1944, the Anglo-American commanders closely coordinate its actions with the Soviet military leadership. Churchill and Roosevelt sought Stalin’s support for the offensive on the Eastern front operation Bagration not only smashed army group Center in Belarus, but also helped the allied landing in France.

The Western front moved to Berlin much slower than the East. So, after fighting for the French city of Caen the Anglo-American troops surrounded hundred-thousandth of a group of Germans. But the offensive stalled because of the fierce resistance of the Wehrmacht.

“And despite the fact that the allies had a huge superiority in forces — said softly. By March 1945, the Supreme commander of the allied expeditionary forces in Europe, Dwight Eisenhower had four million people — more than any commander on the front during the Second world war. However, many of the operations of the allied forces were unsuccessful. For example, in September 1944 in Holland the allies lost two thousand soldiers of the elite units of the airborne troops.”

The USSR helped the allies in repelling the German offensive in the Ardennes — Stavka speeded up the preparation for the Vistula-Oder operation, and, regardless of the weather, the start of the offensive on the Warsaw-Berlin on 12 January 1945. The Germans had to hastily redeploy forces from the Western front, which eased the situation of the Americans. “The last major operation of the allies in Europe — the encirclement of the Ruhr in March — April 1945, says historian. — Captured more than 300 thousand demoralized the Germans. They almost did not resist. But on the Eastern front fought for every village”.

The allies, despite the agreement, sought to capture Berlin first. So, Churchill told Roosevelt that if the Russians will take Berlin, and Vienna, “if not stronger in their minds unwarranted idea that they made a major contribution to our common victory”. But here is what the dry figures: Soviet troops during the war, defeated 607 enemy divisions West of 176. By the spring of 1945 on the Soviet-German front was 214 Wehrmacht divisions, including 34 Panzer, on the West — 60 divisions and five tank only. 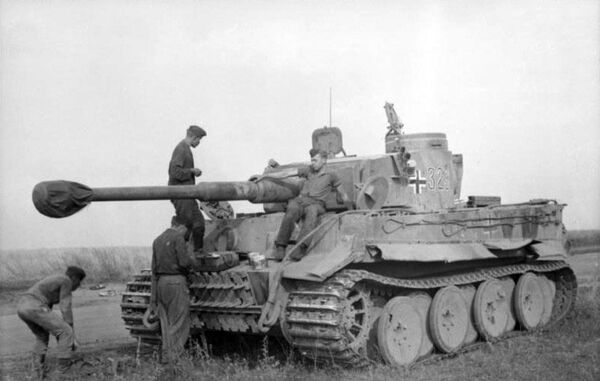 Whatever it was, the soldiers and officers, who met on the Elbe, cheered and was really happy with the overall victory. But Western politicians have already begun to prepare for the cold war. In April 1945, Churchill ordered to prepare the operation “Unthinkable” — a plan of short wars against the Soviet Union, the purpose of which was to dislodge Soviet troops from Europe. In the autumn of 1945 the Americans began the development of nuclear attacks on twenty cities in the Soviet Union.

"Plan B will help you to see alternative markets in Asia