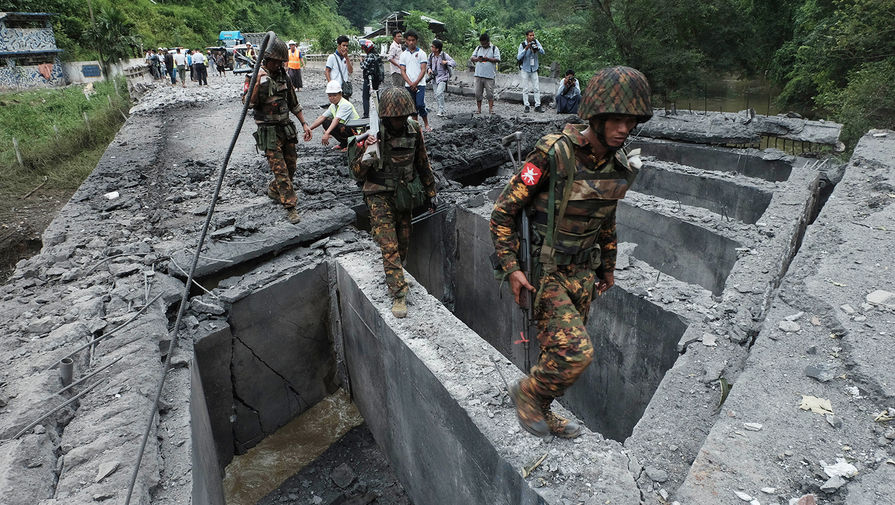 UN accuses Myanmar of crimes against minorities. Due to the global pandemic of the military in this country has received additional powers, which resulted in the massacres in the separatist areas. The official number infected in Myanmar, meanwhile, is around 150 people.

The UN accused the Myanmar government of committing “war crimes” against ethnic minorities.

According to the UN special Rapporteur on the situation of human rights in Myanmar Yangi Lee, the military of this country attacked the civilian population during the recent clashes armed separatists in the state Rakhi the government army.

In conversation with CNN were in Rakhi Li pointed out that after the collision the local monastery were ruined, houses were burned, and they themselves were arrested and tortured.

“And then we found the headless body. It was the Rohingya people,” — said Lee.

In her estimation, what is happening in Myanmar, the event is “a crime against humanity and war crimes”. “This is the most heinous and serious crimes of international law,” she added.

The Myanmar authorities had previously demonstrated its brutality against ethnic minorities. However, this time the situation is aggravated by the global pandemic of mers. To control the spread of the disease the country’s army has received additional powers. In addition, the Committee for combating coronavirus key positions were taken by the military.

According to the representative of the United Nations, this created an unhealthy atmosphere in the government of Myanmar. Having extraordinary powers, the army easily reaches their goals in the separatist state.

Thus the epidemiological situation in the country is far from critical. According to official statistics, Myanmar registered only 150 cases of infection with coronavirus.

With this assessment of events and agree to the international human rights organization Human Rights Watch. “The soldiers of Myanmar and their confederates in the civil government use the fact that the world is distracted by COVID-19. They commit war crimes, trying to break the resistance of the salvation Army Arkan rohinga, and they do not care who they kill or maim to achieve their goals,” says the Deputy Director of HRW in Asia, Phil Robertson.

While the UN noted that the responsibility for the deaths of civilians are also soldiers of the salvation Army Arkan rohinga. “We have evidence that they kidnapped local parliamentarians and civilians,” says Lee.

The main threat for the civilian population represents a cross-fire of government forces and separatist armed group. Victims are not only local residents.

April 20, was fatally injured driver of the world health organization (who), who was driving a vehicle marked with the UN. A government official in the car survived, but was seriously injured. The vehicle was transporting the samples COVID-19.

The Myanmar government expressed its “deepest condolences” and said that it was “fully committed to the investigation of the incident”. Authorities say that the car is UN-fired local militants. According to the armed forces of the country, the autopsy showed that the bullet that killed an employee who is 7.62, such munitions are not the standard of the Myanmar army. The separatists, in turn, were accused of shelling government forces.

From ethnic conflict in Myanmar is a long story. Buddhist majority believes that the state population Rakhi — Muslims from the ethnic Rohingya are illegal migrants from neighboring Bangladesh. The escalation of the conflict to the armed conflict and humanitarian crisis began after the transition in Myanmar from a military government to a civilian in 2011-2012.

In the acute phase of the conflict came in 2017.

Then as a result of actions of the government troops more than 270 thousand representatives of the ethnic Rohingya were forced to leave the country and move to Bangladesh.

All in all, Myanmar is home to about 1 million members of this ethnic group. Human rights activists accused the army units in brutal actions against Muslims and burning their homes.

The government, in turn, said that conducting operation against terrorist groups operating on the territory of the state and enjoy support from abroad. The de facto leader of Myanmar — former dissident Aung San Suu Kyi — blamed the unrest on “terrorists”. This caused outrage on the part of authoritative representatives of the human rights movement, which urged to revoke her Nobel peace prize.

The international community does not support the official position of the authorities of Myanmar. In 2018, the experts in the report of the UN mission to investigate the situation in the country came to the conclusion that armed the Myanmar authorities have committed mass murder of the Muslim ethnic Rohingya, and it was a genocide.