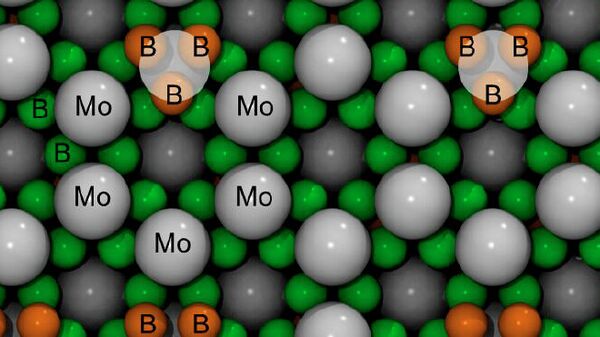 Developed by Russian scientists, algorithm of computer simulation of crystal structures allowed to predict potential superhard compounds, comparable in hardness with diamond. The study is published in the journal of Physical Chemistry Letters.

Earlier, Russian physics under the guidance of Professor Skoltech and MIPT, Artyom Oganov, has created evolutionary algorithm for predicting crystal structures USPEX, and then on its basis the proposed list of hard and superhard materials with potential application in many fields of industry. This list of scientists called the “treasure map” for experimenters.

Most interesting in this “treasure map” are compounds that have high hardness in Vickers is the pressure required to obtain the thumbprint of a pyramidal shape on the material, combined with terminologically — the ability of a material to resist crack propagation.

First of all, it is the borides of transition metals. Their synthesis, in contrast to the widely used diamond and cubic boron nitride, does not require high pressure, which reduces the cost of production.

The high density of electrons in the outer shell of metal atoms and prevents the compression, the electrons begin to repel each other and the strong covalent boron-boron and boron-metal provides strength while the elastic and plastic deformations.

In previous work, the researchers found a previously unknown structure of boride of tungsten — pentameric WB5 and found that it is super hard. In the new work, scientists from Skoltech, Moscow, Institute of General physics named after A. M. Prokhorov, RAS, Russian national research medical University named after N. I. Pirogov and northwestern Polytechnic University in XI’an, (China) investigated the properties of borides of molybdenum.

The most energetically favorable from the point of view of creating among these compounds was higher borides of molybdenum, in which one atom of molybdenum have between four and five atoms of boron. The most stable of them pentaborate molybdenum MoB5 has the estimated hardness Vickers GPA 37-39, that allows to consider it as a potential superhard material that can replace the traditionally used hard alloys and superhard materials in several technological applications.

“We have suggested that the structure of higher boride should have razuporyadochennoi structure in which the triangles are statistically boron to substitute atoms of molybdenum. To confirm this, we developed a lattice model to determine the rules by which the triangles of boron must be placed in the crystal to have the least energy,” presented in a press release, the words of the first author Dmitry Rubcovskaja, researcher Skoltech and IOF them. A. M. Prokhorov, Russian Academy of Sciences.

A computer search of variants of location of the atoms of molybdenum and boron triangles allowed us to reveal regularities, according to which formed the most stable compounds where one metal atom has four to five boron atoms. The most stable composition was MoB4.7. It is very close to the theoretical connection MoB5 predicted evolutionary algorithm USPEX.

“This work is an interesting example of the interplay of theory and experiment. The theory predicted a compound with interesting properties and a new structure, but from my experiment was that the real stuff is harder and has a partially razuporyadochennoi structure,” says study leader Artem Oganov.

Superhard substances have a wide range of applications in machine building, jewellery, development of fields, they are used for cutting, polishing, grinding, drilling.