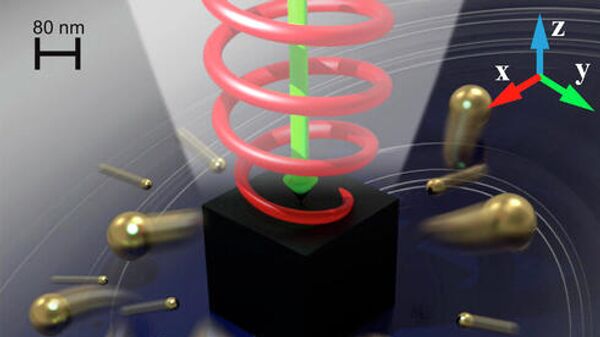 Russian scientists from ITMO University in collaboration with colleagues from the Academy of Sciences of the Czech Republic proposed to use for mixing liquids in microembolic the energy of light. The paper was published in the journal Advanced Science.

Sometimes the biologists, chemists, pharmacists — it is necessary to control the process of mixing liquids in so-called microreactors such small containers where you fail to omit even the most thin needle.

The microreactors, which are also called labs on a chip, used for Express-analysis of blood, mixing of microscopic doses of substances, new drugs, conducting biological experiments on cells.

However, when working with microreactors, there is one problem: scientists have almost no influence on the rate of mixing or, in scientific language, diffusion of liquids and reagents that fall into this Microlaboratory.

The authors of the new study proposed a method that can solve this problem. For mixing the liquids they used a light pressure.

At the end of the XIX century the British scientist James Maxwell expressed the idea that light can exert pressure on physical objects. Soon Russian scientist Peter Lebedev proved it in practice. However, the force of this pressure is quite small, and in those days, her application was not found.

Now this area deals with the whole field of physics — optomechanical. Using light, scientists capture living cells, move the smallest particles of matter and, as it turned out, these same forces can be used for mixing liquid.

Scientists from St. Petersburg developed nanoantenna, representing a tiny cube of silicon with a size of about two hundred nanometers. This invisible device is able to control the light wave which falls on it.

“Our nanoantenna converting light of circular polarization in an optical vortex, is given in the press release words of the head of research, Professor of the New Institute ITMO Alexander Shalin. — Light energy swirls around it”.

To enhance the effect, the scientists added into the liquid a certain amount of gold nanoparticles. Captured optical vortex of the particles begin to rotate around the cube of silicon, acting thus as a “spoon” for mixing reagents. And the size of this system is so small that it could enhance the diffusion of a hundred times at one end of the microreactor, almost without affecting what happens in another.

“Gold is a chemically inert material that is hard to react, says co-author with Adria Kanos Valero, also it is non-toxic. In addition, we needed to ensure that nanoparticles affects only the spin force and radiation pressure, but not the attraction to nanoantenna, otherwise the particles just stick to it. This effect is observed for gold particles of a certain size, if the system is shining normal green laser. We considered other metals, but, for example, for silver these effects are observed only in the ultraviolet spectrum, which is less convenient.”