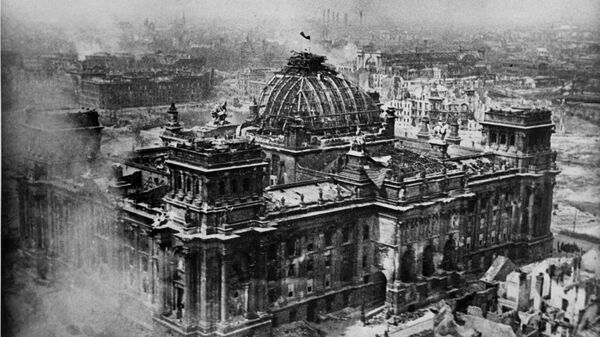 The assault team in 1945, mounted on the Reichstag about forty homemade and official assault flags, said to RIA Novosti, the scientific Director of the Russian military historical society (RVIA) Mikhail Myagkov.

“On the Reichstag was established about forty dozen homemade assault and official flags. These flags, flags, banners were our soldiers found in Windows, and the facade and dome, even on the sculptures which adorned the Reichstag,” said Myagkov.

Director of RVIO recalled that, on 29 April, troops of the 3rd shock army of the 1st Belorussian front approached the Reichstag, and began his assault.

“Immediately to take it failed, the Reichstag building was a powerful site of resistance and was one of the most important objects in the system of defense of the city, around had dug deep trenches, arranged barricades, equipped with machine-gun and artillery emplacements. The garrison, which amounted to about a thousand people consisting of international members of the SS, have had a particularly stubborn resistance. On the stairs and in the room of the main building of the Reichstag the struggle often passed in the melee,” said the historian.

Director of RVIO reminded that symbolic point would be the installation of a banner at the ruined Reichstag, but it was impossible to predict which division, which brigade or regiment was the first out and grab him, so assault flags – red banners were awarded to the representatives of the parts which carried out the assault. Was made all nine official storm flags.

“The first 22.30 30 APR assault hoisted the Red flag on the Reichstag roof on the sculptural group “Goddess of victory” scouts of the 136th army cannon artillery brigade. A few hours on the roof of the Reichstag on the sculpture equestrian knight – Kaiser Wilhelm was set to Red flag number five, which was included in all history books. It was hoisted by Sergeant Mikhail Yegorov and Junior Sergeant Meliton Kantaria, who was accompanied by Lieutenant Alexei Berest,” he said softly.

He recalled that the flag that is hoisted by Egorov and Kantaria, they were transferred directly to the dome of the Reichstag, and his photographs taken from a plane, flew around the whole world press, so that it became the Banner of Victory.

“Witnesses say that the may 2 picture of the day has become a mass pilgrimage of soldiers to the Reichstag, everyone wanted to sign, to leave their autograph, someone in chalk, someone paint someone with a bayonet. On the walls there were thousands of inscriptions. Then the soldiers fell to the ground, on sidewalks and fell asleep from exhaustion,” – said the historian.

He recalled that to display a Banner of Victory was planned during the parade on red square in June 1945, it was delivered to Moscow. Banner on red square had to carry Egorov, Kantaria, captain Stepan Neustroev, the battalion which covered the installation of the banners, but they didn’t have sufficient combat training, moreover, Neustroeva had several wounds, including leg, he was limping, so it was decided that the flag of Victory will not be imposed at all.

“At the Victory banner at the bottom is not enough thin strips of a few centimeters, according to one version of the girl who sewed the banner, cut a small strip and cut on tape, so they, too, were a symbol of Victory,” he said softly.