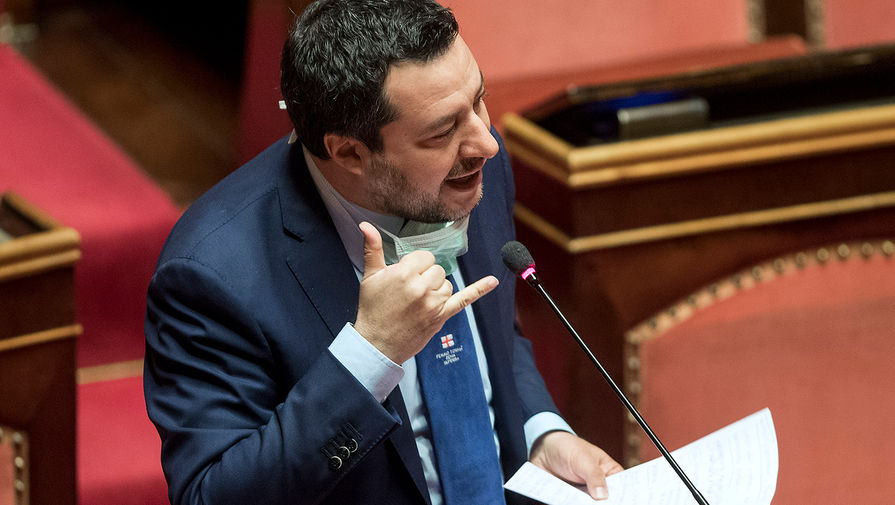 Italian right populist “League”, apparently no longer intends to wait for the crisis caused by the pandemic coronavirus to resume their opposition activities. The night of 30 April, the members of the party led by Matteo Salvini leader staged a sit-in in Parliament, demanding from the authorities the implementation of measures to support citizens and businesses, and accelerated the weakening of the quarantine.

Italy is still recovering from a pandemic coronavirus, but the opposition has already embarked on the confrontation with the government. April 30 night, deputies from the far-right party “League” occupied Parliament in protest against the ongoing quarantine and emergency powers of the government in connection with the treatment of emergencies.

The leader of the party, the main eurosceptic countries and former interior Minister of Mattero Salvini, along with 74 members of “the League” remained in Parliament all night.

They promised to continue the protest as long as the Italians, “who do not know when they will be able to re-open, to get back to work and send children to school”, will not receive from the government an answer about the support measures.

Politicians believe that the authorities have not yet fulfilled most of its promises to citizens and business. In addition, the promised measures are not enough, need to increase aid, and allow all to return to work in compliance with sanitary restrictions, according to “Liga”.

“It is time that Parliament began to participate in the decisions affecting our lives, rights and freedoms. We need to return to the established democracy,” reads the party statement.

The Prime Minister of Italy, Giuseppe Conte, speaking Thursday in Parliament, did not talk about the incident last night, but said that the government’s measures internally.

“Our plan, even if it includes unpopular action in the interest of the public. This isn’t a campaign program created to achieve consensus,” said Conte.

The restrictive measures are valid on the territory of the country from March 9. Italy has become one of the most affected by the coronavirus European countries. According to the latest data, the country identified 205 thousand cases of infection, of which 27 967 fatal. That Italy was the first country in Europe which introduced a state of emergency — it is valid from January 31, a period of six months.

On 27 April, Prime Minister of Italy Giuseppe Conte has announced a gradual easing of restrictions. On may 4, the country plans to allow the work of construction companies, manufacturers and some wholesalers. Open for walks parks. Will be allowed family visitation and funeral ceremony with the participation of not more than 15 persons, but while maintaining social distance.

18 may, Rome intends to begin the second phase of the lifting of the quarantine, the opening of retail stores, museums and libraries, and from June — restaurants, bars, beauty salons and Barber shops. However, schools will remain closed until the beginning of next school year in September.

As in many other countries during the peak of the epidemic, the political forces in Italy have been thrown into the background their differences. The rating of Giuseppe Conte jumped to 71%. According to an Ipsos survey, more than 60% of the country’s citizens supported his work during the crisis, and, apparently, “the League” is not going to wait in the shadows until society konsolidiruyutsya around the figure of the Prime Minister.

At the same time, according to Politico, the recent polls continue to put the right party in the first place (about 26%), however, their approval rating has fallen since January by 4%. But the level of popularity Salvini among Italian officials promised him the second place (31%). While the polls leading George Maloney (35%), a member of the right-wing “Brothers of Italy”.

Right-wing politicians gained popularity in the country after the migrant crisis in 2015. Italy because of its geographical location, was among those European States that felt the effects of the “open door policy”, announced by Chancellor of Germany Angela Merkel. “League” was able to seize the moment.

In 2018 in the parliamentary elections the center-left party “five star Movement” received 32% of votes, and nationalist “League” in the center-right coalition, which included “Forward, Italy” and “Brothers of Italy”, gained 17%.

Initially, “Star” tried to form a coalition with the Democratic party that was in power before. But the Democrats refused to join the Union and chose to go into opposition.

“Five stars” in the result, they formed the ruling majority with the “League” that came out of the center-right coalition, to join the Alliance.

So right-wing politicians entered the Italian government, however, Salvini pointed to the Prime Minister. When a year in the European Parliament elections “the League” and “Five stars” are reversed, (34.3% and 17%, respectively), Salvini decided to seize the moment.

Announcing the collapse of the coalition, the politician was counting on early elections, which resulted in the “League” could get a comfortable majority, to get rid of the partners and the leader of the party to become Prime Minister.

Hostility to the right and willingness to do everything possible to prevent them sole reign, after irreconcilable opponents — “Five stars” and DP — to create a coalition. Negotiations between the parties was facilitated by Giuseppe Conte, who in August announced his resignation due to the current government crisis. After the formation of the new coalition, he again led the country.

One way or another, but to call the current government of Italy is stable is impossible. Salvini, obviously, does not abandon plans to become Prime Minister.

And although now Italian society shows unity around the figure of the Prime Minister, soon the opposition will come any moment for action.

When Rome recovered from pandemic coronavirus in front of him, like other countries, will be another, more difficult question of economic recovery. According to the International monetary Fund, the Italian economy will fall by 9% this year compared to the average in the Euro area 7.5%. One of the reasons for such effects was the height of the AIDS epidemic in one of the major regions-producers of the country of Lombardy, which accounts for about 22% of the GDP of Italy.

However, I apparently spoke too soon. Other Italian MPs have called his protest “buffoonery.”

A member of the party “Italy Viva” Donatella of Conzatti told reporters that the “irresponsible behavior impedes efforts to resolve the crisis.” A member of the “Five stars” Gianluca Perilli wrote in Facebook that “fall of a rating of party caused the League a panic attack”.

“You can’t use the Senate for tricks, when the country and workers need answers,” wrote Perille. Laura Boldrini, a former leader of the chamber of deputies, member of the “Five stars”, said on Twitter:

“The use of institutions for more transparency in this time should be a last resort for me. Not knowing how to solve problems, it creates them.”

“He usually never comes and now he wants to stay here all night,” added Laura Bottici.

Despite the promise to remain in Parliament for as long as the government does not give answers, personal sit-Salvini did not last long. He told local TV that went home in the morning to take a shower and “do not disturb the cleaners.”