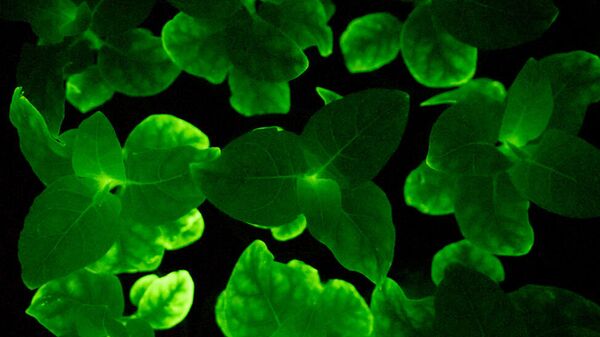 Russian scientists have created the first glowing plants. Property autoluminescence they encoded at the genetic level. The study is published in the journal Nature Biotechnology.

Natural bioluminescence is poorly understood. Until recently it was deciphered only the mechanism of the luminescence of the bacteria. However, attempts to consistently create glowing plants using a bacterial system, was not successful.

A little over a year ago, scientists of the Russian scientific plant startup installed all the components required for bioluminescence in the fungi. Were first fully deciphered the mechanism of luminescence in a complex multicellular organism.

In the new work, the scientists show that luminescence of fungi can be effectively transferred to plants. They have created transgenic tobacco plants that glow at least ten times brighter than previous experiments.

The green glow comes from the leaves, stems, roots and flowers, it can be seen with the naked eye and can be captured on cameras and smartphones. Importantly, the steady glow not prevent the plants to grow normally and to develop.

“We noticed that the metabolism of bioluminescent mushrooms and common plants have a lot in common. And now has successfully transferred necessary for the luminescence of DNA from fungi to plants, creating plants with sustainable illumination, superior brightness all previous approaches” — presented in a press release of the Russian science Foundation, which supported research, the words of the project Manager for the RSF grant, doctor of chemical Sciences, head of Department of biomolecular chemistry at the Institute of Bioorganic chemistry named after M. M. Shemyakin and Y. A. Ovchinnikov of RAS Ilya Yampolsky.

Unlike other widely used types of bioluminescence, to maintain a stable glow using the new approach does not require the addition of chemical reagents. Plants containing fungal DNA, lit continuously throughout the life cycle, from germination to flowering. Glow is constantly changing and can form unusual patterns and waves on the leaves of plants, allowing the first observation of the internal processes normally hidden from the eye.

“Enhancement of luminescence is observed some time after dawn and immediately at the transition to darkness, if the lights are off for a few days, the “waves” of illumination is still some ongoing internal “biological clock” of plants. Prior to the development of glowing plants on the study of the dynamics of metabolism could only dream of. The new technology enables to estimate the phenolic metabolism in minute time intervals, and to obtain information about the localization of processes with a precision of millimeters,” says one of the study’s authors, Director of the Botanical garden of Moscow state University, doctor of biological Sciences Vladimir Chub.

Previously, scientists have found that mushrooms glow is a substance of phenolic nature coffee acid, which is also present in plants. Below there was light, coffee acid must undergo a metabolic cycle involving four enzymes. Two enzymes make coffee acid in a more complex molecule, which is then oxidized by a third enzyme with the emission of a photon — there is a glow. Another enzyme converts the reaction product back into the coffee acid, closing the cycle. Thus, to obtain the glowing plant, the researchers had to move a total of four gene from fungi to plants.

The authors conducted an experiment on two types of tobacco, however, scientists say that they created the system of bioluminescence can be easily transferred to other plants.

This discovery, according to the authors, will find wide application in science. Scientists will be able to use the illumination for observation of internal processes in plants. It can also be used to create glowing flowers, trees and other ornamental plants. The project envisages the creation of a commercial product, so it’s possible that soon glow in the dark houseplants you can buy.