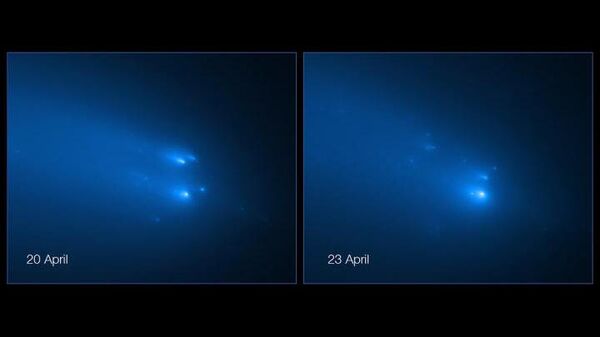 Scientists assumed that the icy nucleus of the comet is fragmenting and falling apart. This version was confirmed by an Amateur astronomer Jose de Queiroz, 11 APR photographed three separate fragment.

On 20 April the space telescope “Hubble” has identified 30 of the wreckage, moving in the tail of comet dust. When April 23 was obtained once the fragments were already 25.

“Their appearance changes significantly within two days, so that it is difficult to compare point — presented in a press release NASA said David Guetta (David Jewitt), Professor of planetary science and astronomy at the University of California at Los Angeles and leader of one of the two teams, photographed the disintegration of the comet. “I don’t know whether this is due to the fact that things flare up and glow, reflecting sunlight, acting as the twinkling lights on the Christmas tree, or because different fragments appear in different days.”

Because fragmentation occurs rapidly and unpredictably, is difficult for scientists to confidently judge the reasons for the collapse of C/2019 Y4 (ATLAS). There is speculation that the comet breaks into pieces because of the gap of the core material under the action of the evaporating gases.

Since the exit gases from the interior of the comet increases and this happens unevenly, increases the speed of rotation of the nucleus, which leads to its fragmentation.

“It’s really exciting, because such events are very spectacular, and because they do not occur very often. Most of the fragments of comets are usually too dim to see them. Events of this magnitude happen once or twice in a decade”, — said the leader of the second team observations “Hubble” Zhuanji Ye (Quanzhi Ye) from the University of Maryland.

In any case, this is the first observation that allow to trace the dynamics of the decay of the nucleus of the comet, which is fast enough. Scientists believe that the observed process can be one of the main mechanisms of destruction of comet, but further observation of C/2019 Y4 (ATLAS) can help you to understand it.

“Further analysis of the data of Hubble can show, responsible for the collapse of this mechanism,” said Jewett.

Disintegrating comet during the observations was inside the orbit of Mars, at a distance of approximately 145 million kilometres from Earth. The closest the comet, or rather what remains of it, will approach Earth on may 23. Then the outer body will be about 115 million miles from our planet, and in eight days she’ll pass only 37 million miles from the Sun.