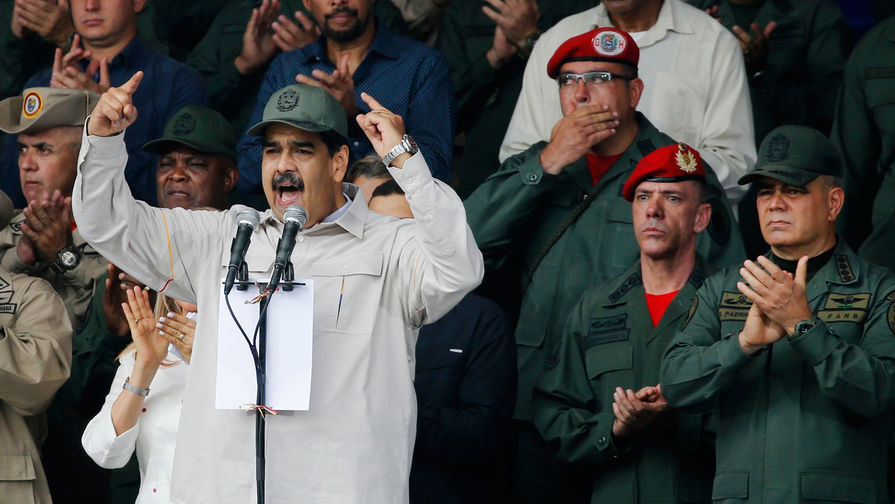 American mercenaries in an amount of about 60 people tried on high-speed boats to approach the coast of Venezuela and kill President Nicolas Maduro, said the politician. He added that the operation was carried out with funding from the United States and trained mercenaries in the territory of Colombia. Maduro added that his country wins the pandemic and terrorism, which are sent from the outside.

Venezuelan President Nicolas Maduro said that “terrorist attack” that occurred on may 3 about the port city of La Guaira, 30 km North of Caracas, was the attempt on his life, reports El Universal.

“Venezuela was faced with an attempt of sea invasion of a group of mercenaries, trained in Colombia, with funding from the United States. We have proof, evidence, video, all the evidence – it was an attempt to kill me. This is a terrorist attack in the midst of a pandemic, directed against peace and tranquility in our country,” — said Maduro.

He also expressed gratitude for the support of the nation and assured that on Tuesday, may 5, will provide more information and evidence of his version of the incident.

“Venezuela wins the pandemic and terrorism, which are sent from the outside. Venezuela has come a long way in relation to pandemics with the support of other countries such as China and Russia. We managed to secure international support for Cuba, which sent a huge contingent of doctors,” — said the head of state.

Last Sunday, Venezuelan authorities said they foiled the assault, conducted with the support of the United States, killing eight of the attackers. The Minister of internal Affairs of Venezuela, Nestor Reverol said that a platoon of “mercenary terrorists” had tried to approach the shore on a speed boat, but were repulsed by security forces.

“Some were killed, others detained,” Reverol said in a televised statement, accusing the attackers of conspiracy to murder leaders of Venezuela.

The reverol explained that “a thorough search of accomplices of the attackers is on land, sea and air”, and promised “to remain in a constant state of readiness and resistance.”

Later Caracas reported that the operation involved “60 soldiers”, including two former members of the US special forces.

In March of this year, the U.S. Department of justice announced charges against Maduro and a few “accomplices” in the organization of drug trafficking and human trafficking, including the smuggling of drugs into the United States.

How to say in Washington, Venezuela has long allowed the Colombians associated with the Revolutionary armed forces of Colombia, known as FARC, to use its airspace for the transport of cocaine through Central America to the North, reports FoxNews.

“According to our estimates, from Venezuela was sent from 200 to 250 metric tons of cocaine. This 30 million lethal doses”, — stated in the message of the Ministry of justice.

Washington offers a reward of $15 million for information leading to the arrest Maduro, and alleged accomplices — $10 million the US has also accused the chief justice of the Venezuelan money laundering and bribery, in which thousands of Venezuelans lost their jobs and livelihoods.

“Occupying key positions in the regime of Maduro, these men betrayed the public trust, facilitating drug shipments from Venezuela. They exercised control over planes flying from an airbase in Venezuela, as well as control over the movement of drugs through the ports of Venezuela,” said U.S. Secretary of state Mike Pompeo.

23 January 2019 during a rally in Caracas against Venezuelan President Nicolas Maduro Juan Guido declared himself interim President of the country.

Guido as the legitimate President of Venezuela recognized the United States, Canada, and Latin America. The Russian Federation officially expressed their support for Maduro as President, elected in the elections.

A similar view was expressed by Belarus, Bolivia, Iran, China, Cuba, Nicaragua, El Salvador and Turkey. Mexico as a country “Lima group” that supported Guido, did not join in this issue with his colleagues in the Alliance.

The European Parliament recognized the opposition leader of Venezuela Juan Guido the legitimate acting President of the country. For the resolution voted 439 MEP, 104 opposed, and 88 abstaining.

Earlier, Maduro said that the former leader of Colombia Alvaro Uribe was preparing a plan to assassinate him. According to him, the attack was carried out mercenaries.

“It was supposed to send to Venezuela 32 mercenary that they tried to kill me,” said Maduro, speaking in Caracas.

He also added that the assassination “was attended by Colombian Ambassador to the U.S. Francisco Santo”. His opponents have discussed this plan in the mansion Uribe said Maduro.

The Venezuelan President was referring to an incident that occurred in August 2018. Then the head of the country tried to kill at the ceremony in honor of the 81st anniversary of the Bolivarian National guard.

The attackers attacked the leader of Venezuela with the help of unmanned aerial vehicles with explosives. The attack injured seven people, but the Maduro did not receive any injuries.