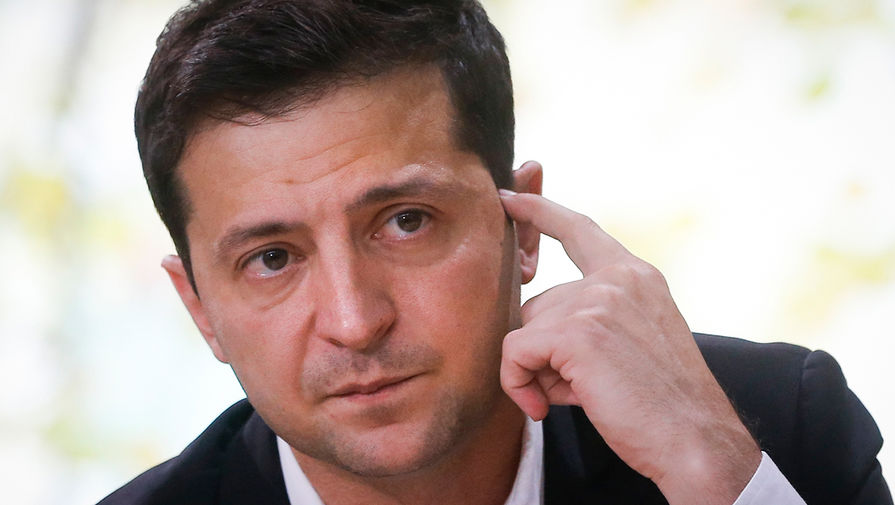 The rating of Vladimir Zelensky fell to a record low of 42.6% due pandemic coronavirus, as well as the General discontent of the Ukrainians regarding the actions of the new head of the country. Almost a year of his presidency Zelensky was not able to stop the war in Donbas and defeat corruption, the epidemic is even more confused maps of the Ukrainian leader, hitting the economy. The policy of the President of Ukraine more and more resembles the path of his predecessor, Petro Poroshenko.

The rating of President Vladimir Zelensky almost fell twice during the year of his presidency. According to a survey by the Kiev international Institute of sociology (KIIS), at present the Ukrainian leader would vote only 42.6% of Ukrainians a year ago, the figure was 73.2 percent.

According to the KIIS, if the elections in the end of April Zelensky opponent is likely to once again become an ex-President Petro Poroshenko — his approval rating now stands at 14.9 percent, followed by Yuriy Boiko from the party “Opposition platform For life” with 12.2%, the leader of “Batkivshchyna” Yulia Tymoshenko of 9.7%.

In this case we are talking about undecided voters, given all the variables, the picture for Zelensky emerges even more disappointing.

So, to KIIS noted that the incumbent would receive 27.7% of the votes. But this is the first place in ratings. Poroshenko in this case, it would have gained 9.7% and Boyko — only 8%.

At the same time, the study of the Razumkov Center from April 29 shows that the majority of Ukrainians still trust Zelensky — the figure is 59%. However, with the authorities the situation is different, the actions of the Verkhovna Rada is supported by only 28%, the government of Ukraine — 32%, and the national police and the Ministry of health trusted by 36% and 29% respectively.

It is worth considering that since taking office Zelensky set out to update all of the structure and possible to replace the associates of his predecessor Poroshenko. So, early elections to the Rada allowed the presidential party “servant of the people” to most, and then choose a new government. The reshuffle has affected the police, the SBU, the Prosecutor General’s office and other structures, so in this case, the lack of confidence of the people it also affects Zelensky.

The fall of the rating of the President of Ukraine — the thing is understandable. This is due to the fact that certain changes under the new government, Ukrainians did not feel. Big promises Zelensky at the end of the conflict in the Donbass, the restoration of economy and struggle with corruption yet remain slogans.

The process of resolving the situation with the self-proclaimed DNI and LC actually is in deadlock due to the fact that Zelensky continues to refuse direct dialogue with Donbas — thus repeating the policy of Poroshenko.

Besides, it is not possible to achieve full compliance with the ceasefire regime, the withdrawal forces on the separation line, and the reconciliation of future elections in the country.

On the economic front also, not everything went smoothly, as Ukraine’s dependence on loans from Western partners, in particular the International monetary Fund (IMF) election Zelensky has not gone anywhere. The IMF demands from Kiev promotion of unpopular reforms, including the lifting of the moratorium on land sales. This decision Zelensky features not met with popular support and sparked a number of protests.

The situation also worsens the crisis caused by the pandemic coronavirus. Tough measures to combat the epidemic dealt a severe blow to the economy of Ukraine. According to the most optimistic forecasts, in 2020 the country will lose at least 5% of GDP. According to the head of the NBU Yakov Smoliy, the impact of the pandemic on the economic situation was a short, but very powerful.

The only area where the work is relatively active, is the fight against corruption. High-profile cases to apprehend offenders, began. In particular, in late April, was dismissed head of the Tax and Customs services Sergey Varlamov Maxim and Nefedov, one of the reasons was theft in the amount of from 5 to 10 billion (from $185 million to $370 million). We also adopted a number of measures against the MPs for the fight against corruption, especially we are talking about the abolition of immunity.

However, the special effect is not yet given — as said ex-Prime Minister Alexey Goncharuk, corruption returns to the Ukrainian government.

“This question is for law enforcement to prove something, to blame someone. But the signals that I see with many markets, disappointing”, — stressed the politician.

Year of the reign Zelensky also interesting for its specific similarity to the beginning of the presidency Poroshenko.

Poroshenko, like Zelensky, began his duties with “cleansing” the Parliament and the government from the old regime. He promoted the law “about the cleansing power”, which outlined the objects of lustration of all government officials and employees of local governments who held positions during the presidency of his predecessor Viktor Yanukovych.

During his inauguration, Poroshenko promised to organize early elections in Donbass, to “return” the Crimea and to seek the inclusion of Ukraine into the European Union. However, a year later after the election it seemed that the situation has only worsened.

Yes, the outline on the European integration appeared, but it has only increased the financial dependence of Ukraine from the West. Conflict with the DNI and LC crossed into the category of military conflicts and the economy of the country started to fall down from 2014 and 2015, Ukraine’s GDP decreased by 9.7%.

However, fell and the rating of Poroshenko, at the time of his election was supported by about 47.6% of Ukrainians, according to data from Gallup. In a year this indicator fell to the level of 33%. In the future, it continued its fall, reaching a low in December 2015 — 17%.

As wrote The New York Times in the same year, Poroshenko failed to demonstrate certain results, and the Ukrainian government is too weak and cannot create a unified and independent state.

In certain aspects, this path goes and Zelensky, although to choose a different path prevents him formed Poroshenko system. In particular, we are talking about the promotion of nationalist movements with which to tolerate current President.

Despite the fact that the number of right-wing not that big, and their opinion has a certain weight in Ukraine. This is evidenced by the reaction of Kiev on last year’s protests, which were triggered by the approval of the plan for granting special status to the Donbass in the framework of the tripartite group.

Then the national movement took to the streets of Kiev with the requirement to cancel this decision, and to prevent Amnesty participants of the conflict. Office Zelensky responded vaguely, giving the appearance of uncertainty surrounding the signing of the document, and only after some time recognized this fact.

Obstruct the President, not only this factor but also the corruption, of the demands of Western partners and a number of other conventions, which have to put up. However Zelensky is still supported by majority of Ukrainians, and the main problems have gone by the wayside because of the pandemic.