Analysts from BitMEX Research, research division of the exchange BitMEX cryptooperation, has published a detailed overview of the Ethereum 2.0, scheduled for launch in July 2020.

Than Ethereum 2.0 will differ from the current blockchain?

Analysts pointed out that the launch of a new blockchain Ethereum may not be such an important event, as many think, because at the initial stage of the Ethereum 2.0 would essentially work as a test network for the new system of Proof-of-Stake. A large part of economic activity and smart contracts will remain in the “old” network of Ethereum that will work in parallel with eperium 2.0. Is a one-way bridge, which ETH1 can be transferred to ETH2 (without the possibility of reverse translation).

This transition is risky, very difficult and long. According to analysts BitMEX, the main motive for this transition has been the scalability. Network Ethereum has managed to become popular and now handles a relatively large volume of transactions. To continue growth, the operators gcd will be forced to work on large computers, which can lead to increased centralization, and this, in turn, may adversely affect centrosoyus system and ultimately support such a network will become meaningless.

The main problem is that sharding implies a significant change of the economic model of Ethereum. If the understanding of many users of the Ethereum is a “world computer” that cannot be stopped, then the implementation of sharding may not meet their expectations, since Ethereum will be broken into several shards/segments (multiple computers). If a smart contract on shard 1 will want to interact with the contract on shard 2, it can cause significant difficulties because of the need to coordinate between the shards.

Thus, between sharding and the concept of computer on a planetary scale is not very common. One could even argue that the Ethereum and sharding are opposing concepts. On the other hand, with the help of sharding the Ethereum will be able to occupy several niches with different categories of users who are interested in different types of applications. In such a world, the separation may make sense and increase the network flexibility to work with different user groups that use the same underlying token Ethereum.

The fact that sharding is a fundamental change in the functioning of Ethereum, explains why this transition is so difficult. Existing smart contracts you can’t just move to another network. To create the new network, and based on it we need again to create smart contracts. The transition will be painful long process. In the initial stages of the Ethereum 2.0 will exist as a parallel system along with the Ethereum 1.0, and at some point in the future the two systems will be combined into one.

Three phases of transition on Ethereum 2.0

The transition to Ethereum 2.0 will take place in three stages:

This phase will be launched in July 2020. In the past, its launch was postponed, but now it looks like he still held. This phase will focus only on the test system Proof-of-Stake (and not something else), so this network can be viewed as a test, although it will use the real ETH.

There are different aspects of the system Proof-of-Stake, which must function properly, for example: management of a set of stakanov; managing funds of stakanov; a random number generator to help choose the manufacturers of units; a vote of stakanov per block; rewards and penalties when stacking.

During this phase we will work in parallel to the 65 “mini-blockchains” ― Beacon chain of zero-phase and 64 new shard. Between Beacon chain and 64 shards will be two-way communication.

It is expected that at this stage in the network is a significant economic activity (and not only staking) and smart contracts. Shards will no longer be the basic data containers and will perform the functions of Ethereum 1.0.

The specifications for this phase has not been completed, and, according to analysts BitMEX, it is necessary to undertake a lot of work to the network was ready for this phase.

When will start the Ethereum 2.0, parallel will operate two networks: Eth1 and Eth2. Users will be able to translate ETH1 to ETH2, but without possibility of reverse conversion. Theoretically, therefore, ETH2 needs to be traded at a price less or equal to the price of ETH1. However, in the early stages of transition it is unlikely that ETH2 will generally have a price or be supported by cryptomeria, as it will be used only for staking.

For translation ETH1 to ETH2 will use an escrow contract on Ethereum 1.0. This contract essentially destroys the coin ETH1. Coins are burned forever, although theoretically it is possible to recover the Ethereum 1.0 through changes in the Protocol by hard forks. Coins, converted into Eth2, automatically fall into a pool of validators in Proof-of-Stake.

According to the specifications Ethereum 2.0, each validator requires 32 ETH. If the contract is sent to more than 32 ETH, the Staker shall not receive remuneration from these extra coins and if sent to less than 32 ETH Staker is activated. So to put ETH in Ethereum 2.0, you need to do it in batches of 32 coins. Each batch of 32 ETH may be a Staker.

Calculator rewards for staking Ethereum 2.0 after the transition to Proof-of-Stake.

The issue of coins

As mentioned above, at the same time there will be two parallel systems. The Ethereum will continue to work on Proof-of-Work, while the Ethereum 2.0 will work on a new system of Proof-of-Stake. During this period, as miners and steneram need incentives to support the network, so the rate of inflation in Ethereum will rise (at least temporarily) as long as the two systems eventually merge. This may be a disadvantage or a price worth paying to ensure a successful transition to Ethereum 2.0.

As for the schedule of inflation Eth2, the level of emissions will depend on the number of ETH who is involved in staking. The annual release schedule will be based on the following algorithm:

Where Eth2 is the number of ETH that participates in the pool a PoS validators. These figures are apparently based on the calculations made by acne Baterina.

The essence of the above formula lies in the fact that investment income will decrease when increasing the number of stakanov. 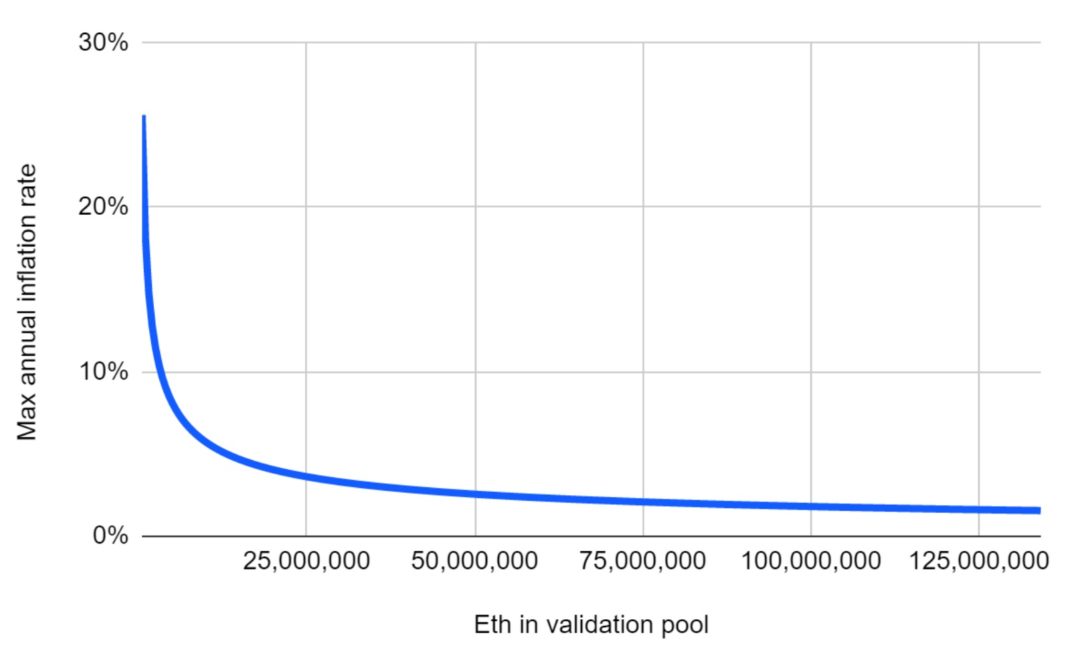 The basis for this inflation is the incentive. In the initial stages of reward should be an incentive to move coins Ethereum 2.0; the growth of the number of coins of incentives will be less and less. This should ensure transfer of a sufficient number of coins, and at the same time, the issue should not become too high.

Some may pay attention to how this issue does not really fit into the original plans Ethereum on a “permanent linear inflation”.

The “model permanent linear supply growth reduces the risk of what some consider the excessive concentration of wealth in bitcoin, and gives people in the present and future a real opportunity to acquire coins at the same time preventing the depreciation of the ether, because the “supply growth” in percentage terms, over time, still tends to zero”. ― Ethereum Whitepaper

There are potential factors that can mitigate the potential impact of high inflation:

The above mechanisms can lead to the burning of large quantities of air that may reduce inflation, but it is difficult to predict the significance of these factors, so there is considerable uncertainty in relation to the issuance of the coins.

According to analysts BitMEX, Union, Eth1 and Eth2 back to one system may take several years. In the future Eth1 should become one of the shards inside Eth2. Then we can move the air between the shards in both directions, and then two coins will merge into one. It is planned that a large part of economic activity in the Eth1 will continue inside the shard Eth2.

The next step could be a merging system of consensus. Shard Eth1 will be able to gradually move on to the Proof-of-Stake. Proof-of-Work will continue, but after a specified number of blocks (e.g., every 100 blocks), consensus can be defined by the system Proof-of-Stake.

In the end, a confirmation through Proof-of-Work can be completely stopped. This would give the users of Ethereum and investors more confidence in the schedule of inflation.

Community Ethereum loves to experiment with new and complex systems, whether DAO, ICO, Maker and now DeFi. Some community members expressed concern about the fact that the technology of Ethereum for five years, she’s fallen behind and need something new.

The Ethereum 2.0 was the answer for a community that is always open to new ideas, so BitMEX analysts predict that a significant amount of funds will go to the Ethereum 2.0 for rewards for staking (perhaps billions).

“Many people ask us, how will the launch of Ethereum 2.0 on the price. Of course, in the short term, a significant number of ETH can be locked inside the Beacon chain, which invest to receive the reward for the block. This may limit the supply of ETH at the market and raise price; on the other hand, the ETH can be invested from other smart contracts. However, the real question is whether the Ethereum 2.0 to have long-term value, and this should not only limit supply but to create steady demand”, ― analysts write.

For the successful operation of the network Ethereum 2.0 system Proof-of-Stake and sharding should attract economically important components of ecosystems, Ethereum 1.0. The Ethereum 2.0 is an incredibly ambitious project, and analysts believe it is unlikely that everything will go exactly according to plan and without major disruption.

“However, despite all the potential problems, the Ethereum 2.0 is to try to run, because if it succeeds, the potential rewards will be very significant”, ― analysts conclude.

Publication date 06.05.2020
Share this material on social networks and Express their opinions in the comments below.