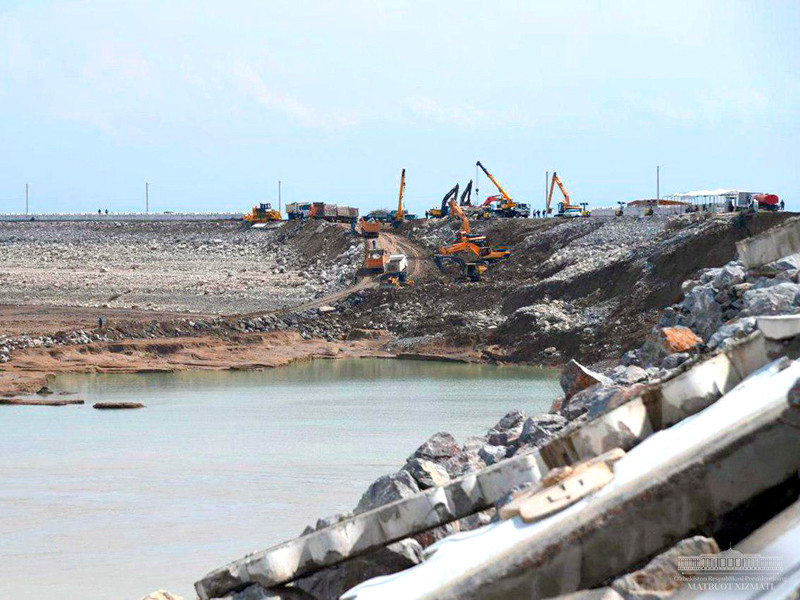 On may 1 there was a dam break Serdobintseva reservoirs in the Syrdarya region of Uzbekistan. The result of the gushing water flooded not only nearby areas but also a large area in the South of Kazakhstan.

In Uzbekistan, the flood caused damage to settlements and crops in Sardobinsky, Akalanka and Mirzaabad districts of the Syrdarya region. Of the 22 villages were evacuated more than 60 thousand people, reports the website of the President of the Republic.

In the result of search and rescue activities were rescued 138 people. Information on victims didn’t arrive.

The reservoir to repair the dam formed 2 teams, intensive full-time work. This process involves hundreds of qualified specialists and more than a thousand units of special equipment. Delivered large boulders, concrete blocks, slabs and other building materials, and before the dam is built a semicircular barrier wall.

To reduce the main flow from the reservoir the Uzbek side was opened gateways into a network of irrigation canals. The result of which was filled with water the border collectors Maktaaral district the Turkestan region of Kazakhstan, noted on the website of the Committee for emergency situations of MIA of RK.

Due to the floods here on may 2 was evacuated 31606 people. In the village Atakent was established 24 temporary accommodation of the population. According on may 4, remains podtopleny 631 house in Zhana-Turmys (46), Zhenis (130), Ferdowsi (250), Orabase (194), Dostyk (11). The rescue involved 986 people, 4 boats, 180 units of equipment, informs the administration of the Turkestan region.

At risk remain flooded in 5 settlements, in five the threat has passed. In villages erected protective dams, the longest of which Nurlyzhol, its length is 2.5 km and a height of 1.5 meters. Strengthening works are also held in a nearby Meeting area.

As stated by the head of Department to monitor the situation in the reservoirs of the Ministry of water economy of Uzbekistan Sharifjon Kuchkarov dam Serdobintseva reservoir occurred from-for adverse weather conditions. Within 2-3 days there it was raining and a strong wind was blowing. But in fact, the reason of this disaster may be different. Experts in the field of construction and reservoirs associated with the editorial staff of “Radio Ozodlik”, believe that it happened because of the appalling corruption, monopolies and theft, according to the website “Now”.

One anonymous expert told reporters about the scheme of “kickbacks”, which operates in the construction of various facilities in Uzbekistan.

“The volume of the reservoir is very large. This is a project worth $ 25 million. If the construction company will have 20-30% with this money, she will never go to the steppe to build this structure. The embezzlement scheme is very simple. For example, the area of the reservoir for ramming which requires 1000 cubic meters of sand, consume 500 cubic metres of sand,” – said the expert.

Journalists also found one of the builders Serdobintseva reservoir. He confirmed that the tools and materials during work on the project just plundered.

For liquidation of consequences of emergency situations was created a Special government Commission. The Commission is not yet released. However, the sides “Ozodlik” say they do not believe that real culprits of the incident will be found and brought to justice.

“And this time it will happen, as with the investigation of the causes of the incident at the YUNUSABAD metro line. It on behalf Samatova (first Deputy Prime Minister of Uzbekistan Achilbay of Ramatov – Approx. “Radio Ozodlik”) for the construction of the metro line were involved in the defense and railway workers who worked for free or almost for free. After the tragic incident of Ramatov headed the government Commission to investigate the causes of the emergency. Perhaps they fined one or two builders for failure to comply with safety, but the main culprits of the tragedy continue to occupy high positions. Just as happened with the incident on Sardobinsky reservoir. The composition of the government Commission again will do the perpetrators of the incident, and laid blame on a natural disaster, “will be released unscathed,” said one of the Uzbek officials from the construction sector.

However, the head of the Department to monitor the situation in the reservoirs of the Ministry of water economy of Uzbekistan Sharifjon Kuchkarov said that for such pessimistic forecasts there is no reason.

“The conversations that blame the strong winds, and the true perpetrators will remain unpunished, have no reason. A government Commission will study all the causes of PE on Sardobinsky reservoir and make its fair conclusion”, – assured the official.