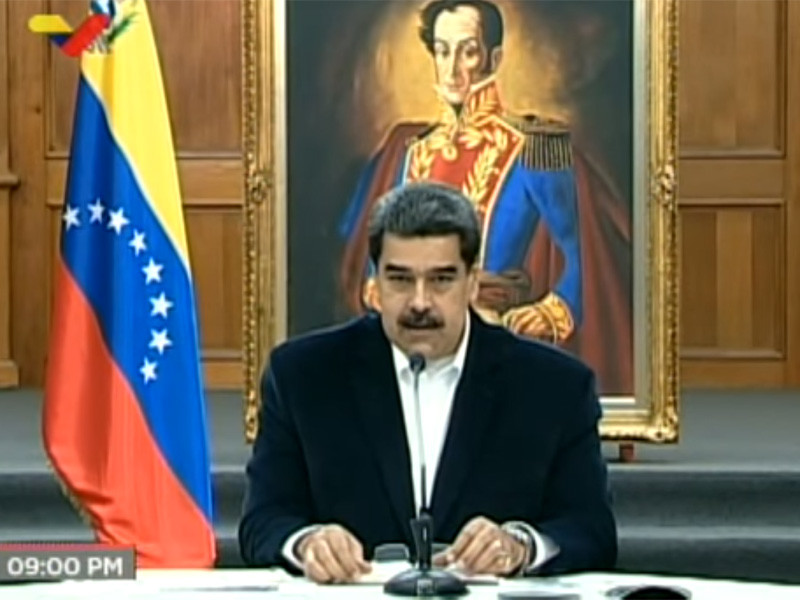 Venezuelan President Nicolas Maduro announced the capture of mercenaries whose aim was a coup d’etat in the Republic and the assassination of Maduro. Attempt sea invasion took place on 3 may by Colombia with the support of Washington, according to authorities of Venezuela. Eight of the attackers, according to official reports, were killed, several detained.

Speaking on state television, Maduro said that the mercenaries were found drugs, dollars, weapons, satellite phones, radios, night vision devices. According to Maduro, they are “playing Rambo” and “portrayed themselves as heroes.” Referring to the testimony of one of the detainees, the Venezuelan President said that the incursion team were allegedly two personal protection officers of the American leader is Donald trump.

According to the Chairman of the National constitutional Assembly of Venezuela Diosdado Cabello, among the detainees was the management agent for the U.S. drug enforcement. Maduro showed us passports and other identification documents in the name of Ira berry and Luke Denman.

He said that the Venezuelan authorities found out about the preparations for the invasion in advance and “activated all the mechanisms for the protection of the coast”, the TV channel Telesur. The search and seizure of “terrorist groups” were sent to 25 thousand military.

The Minister of defence in the government of President Vladimir Padrino Lopez said that one of the speed boats of the attackers were sunk by fire from shore and that the military court of the Bolivarian Navy long afterwards looking for survivors on the coast. During his speech, Padrino, surrounded by armed soldiers and armored vehicles, called the attackers “cowardly mercenaries who have no soul.”

Diosdado Cabello linked the attack with another alleged plot, foiled in his words, in March of this year, because one of those killed was identified as a drug dealer and terrorist named Panther, was involved in secret arms deliveries from Colombia “counter-revolutionary forces” inside of Venezuela.

According to Maduro, the US “decided to use the time of a pandemic to terrorist attack” to distract public attention from the “humanitarian tragedy” in the country caused by a coronavirus. In the United States and Colombia deny the preparation of the invasion of Venezuela. The Colombian foreign Ministry said that the Bogota accuses Caracas, to divert attention from the internal problems of Venezuela, and urged the international community to reject the accusations of this kind, reports TASS.

The US state Department has called the statements of the authorities of Venezuela misinformation. “We have seen reports from Venezuela, but we have little reason to believe anything that comes from the former regime. The Maduro regime consistently uses misinformation to shift the focus from his poor management of Venezuela,” – told RIA “news” the representative of the foreign Department of the USA. The U.S. drug enforcement stated that it had no part in the events on the coast of Venezuela.

Meanwhile, the responsibility for the operation assumed the former special forces soldier Jordan Hudro, who heads a private security company Silvercorp USA in Florida. In an interview with The Washington Post, he confirmed that the Ira berry, Luke Denman, and six Venezuelan citizens were arrested in a group of about 60 people. Also captured was taken by one of the leaders of the operation, former commander of the army of Venezuela, Antonio SCEA.

According to Hudra, berry and Denman – ex-special forces (“green berets”), which he personally knows many years and will seek their release through the state Department. Hudro also confirmed that 8 people were killed.

May 2 AR told about the March failed attempt to overthrow the government of Maduro, taken together with Hudro deserted by a retired army General Venezuela jib alkali, which in the United States charged with drug trafficking. For a campaign called “Operation Gideon”, was collected about 300 armed fighters. In the investigation said that the conspirators coached dozens of deserted Venezuelan soldiers in secret camps in Colombia. The goal was to organize an armed RAID across the border, which would have ended in capture or arrest Maduro.

Goodro boasted that guarded trump, and that he supposedly has ties in the administration of the American President. According to AP, the former commando was indeed represented after someone in the security sphere longtime bodyguard trump’s (now former) Keith Schiller, but later, after the meeting, which discussed the need to strengthen the security of the leader of the Venezuelan opposition of Juan Guido and his team, Schiller ceased all contact with Hudro.

As writes AR, the terms of private army Goodro was obviously doomed her from the very beginning, there was no funding or support from Washington, and even if the plotters managed to cross the Colombian-Venezuelan border, they probably would have suffered a defeat in the first battle with the forces of Maduro.

According to a former Navy seal, who was in training camp, the conditions there were bad: there was no water, people were sleeping on the floor and malnourished, instead of assault rifles trained with scraps of brooms. Venezuelan opposition Deputy Hernan Aleman, who knew about the undercover operation claims that neither the U.S. government nor the government of Colombia did not participate in the conspiracy to overthrow Maduro. He noted that he tried several times to talk about the plan with Guido, but he showed little interest.

AP found no indication that U.S. officials sponsored actions Hudro and that trump has sanctioned covert operations against Maduro. However, the actions of the former member of spetsnaz knew the Colombian authorities and prominent opposition politicians in Venezuela and bogotá. Some of them, according to sources, the Agency shared the information with officials in the United States.

The conspiracy quickly fell apart after in early March, one of the volunteers was detained at the border crossing the Venezuelan-Colombian border. Soon after, Colombian police stopped a truck carrying weapons and equipment in the amount of 150 thousand dollars. Retired General alkali explained the March failure leaks “in the heart” of the Venezuelan opposition, “the part that wants to coexist with Maduro”.

In an interview to an independent journalist Venezuelan origin Patricia Poleo Hudro says it is temporarily received support from the Juan Guido. In particular, he showed a contract of “services of General interest”, allegedly signed by Guido and his two political advisers in Miami last October, amounting to 213 million dollars. In this case the contract it is not indicated what kind of work was to perform Goodro company owned by Silvercorp USA.

The former commando also unveiled a four-minute audio recordings allegedly secretly made on the mobile phone at the time when he signed the contract with Guido at a conference. In the recording the man in broken English Goodro indirectly showing support, but does not discuss any military plans. One can clearly hear only the words “let’s get to work!”, reports “Radio Freedom”.

While Hudro in the same interview, constantly contradicts himself. He stated that he had never received any money from the team leader of the Venezuelan opposition, and that the former Venezuelan soldiers, whom he trained, lived on the donations of immigrants, moonlighting as Uber drivers in Columbia.

Former senior officer of the Venezuelan police chief Ivan Simonovis, now of Washington advises the leaders of the Venezuelan opposition on matters of intelligence and security, suggested that the events of may 3 could be clashes between different units of the army or of the Bolivarian guard, not shared with its own kind of shady business. According to Simonovic, the government of Maduro will now be able to use this story to “justify new repression of Huang Guido, his environment and any Venezuelan who opposes dictatorship”.

Riot in Portland as armed pro and anti-Trump groups fight with clubs, shields and bricks

After the explosion, the virus: Lebanon faces COVID-19 lockdown after Beirut blast