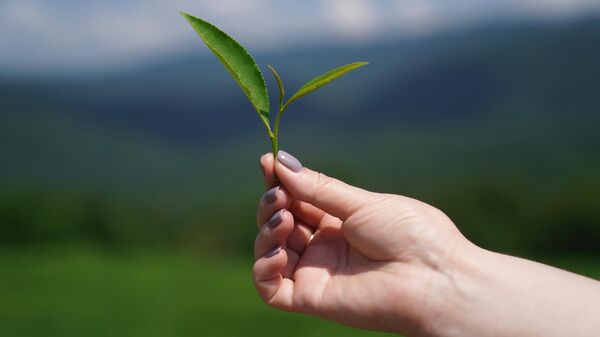 Vladislav Strekopytov. In China and other Eastern countries, tea is considered a medicinal drink. Drink it primarily for the maintenance of tone, mood improvement and prevention of all diseases, including cancer. And there are reasons for this, including scientific.

Today tea is the most popular beverage in the world after water. It is believed that it has been used as a medicinal and stimulant in China 3500-4000 years ago, and to the II century BC, the tradition of tea drinking has spread across Central Asia. Tea, along with silk and porcelain was one of the main goods transported along the silk road.

Any tea — black, green, white, yellow, Oolong or PU’er is made from the dried leaves of the same plant — Camellia sinensis. The mystery of the origin of tea lies in the fact that all known members of the species Camellia sinensis — cultural. Wild counterparts in nature is not found.

The second part of a species name translates as “Chinese”. Nevertheless, scholars have identified three different genetic lines or varieties of tea tree Chinese from southern China and two Indian — a native of the Chinese province of Yunnan and Assam region of India. 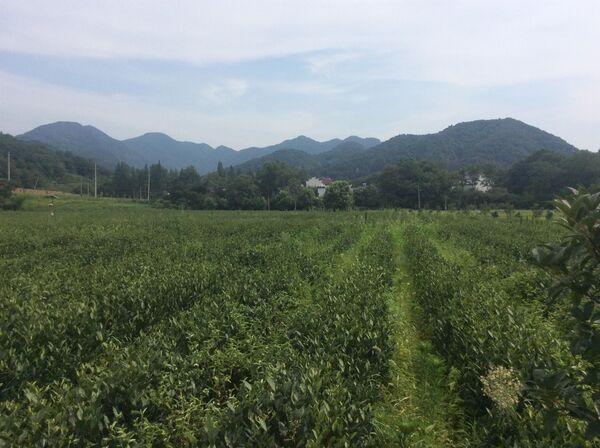 In addition to the pleasant taste and aroma, the tea beverage has many healing properties, based on the biological effects of secondary metabolites produced in tea leaves. These chemicals help the plant to survive, and, as it turned out, some very useful for a person. First of all, the caffeine, catechins and L-theanine.

The effects of caffeine are well known. It is a strong psychostimulant that is used to relieve headaches, improve mental and physical performance, eliminate sleepiness and depression, stimulation of respiration and cardiac activity. Most caffeine in black tea, less in Oolong, and very few in green and white.

Catechins — polyphenolic compounds, powerful antioxidants that help the plants to cope with oxidative stress and in the human body to neutralize so-called free radicals that can destroy cells. Catechins in green and white tea more than black, and they give the drink a bitter taste.

Tea contains four types of catechins, of which the most potent — epigallocatechin gallate (EGCG). In a Cup of green tea and its much more than caffeine.

Green tea extract called “L-theanine” offer on the market in the form of food additives, reduces stress, improves memory and learning ability. But studies have shown that black tea theanine even more than the green. And the maximum amount is, oddly enough, been found in tea bags.

Can green tea protect from cancer

Epigallocatechin gallate, which is rich in green tea, exerts anti-carcinogenic properties. First of all, it causes apoptosis self-destruction of tumor cells, while preserving adjacent healthy tissue. As scientists have found that this compound inhibits the enzyme complex known as the proteasome, which cancer cells using for cleavage of biomolecules to resist apoptosis.

Also EGCG and other catechins in tea prevent the formation of toxic molecules ROS — reactive oxygen species, which can promote the growth of cancer cells. And prevents the formation of blood vessels that supply the tumor with oxygen and nutrients. 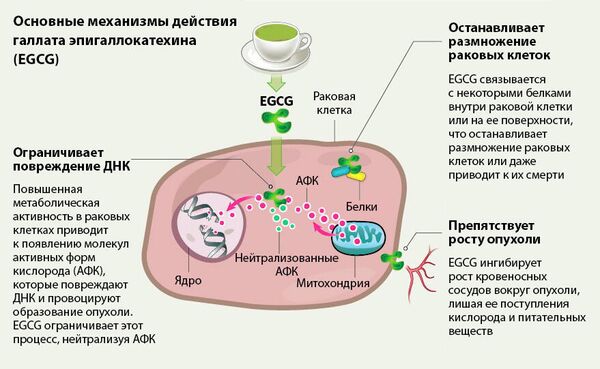 Numerous studies on animals show that extracts of green tea is highly effective for the prevention of cancer and successfully stop the growth of tumors. However, the dose kahetinov in such experiments are too high and can be dangerous to the human liver. Faced with this, those who abused BAD with catechins for weight loss.

Although to disseminate the results of experiments with animals to human should be very cautious in scientific journals regularly publish articles that prove that green tea or some of its chemical components may protect against cancer. Thus, a large-scale study 2016, which tracked the health of more than 164 thousand Chinese in the period from 1990 to 2006 showed that regular consumption of green tea reduces the risk of death from cancer in 8-21 percent.

During the cohort study in the Netherlands, scientists analyze long-term changes in the health of 120 thousand people, found that tea consumption reduces mortality from cancer, cardiovascular disease and overall mortality.

In other studies, medical researchers noted the slowing of the progression of tumors in patients with colorectal cancer, prostate cancer, breast and skin when taking the capsules with green tea extract containing catechins and a decrease in the formation of precancerous lesions in those who received the extract compared to the placebo group.

As the tea gets on your nerves

The effect is having tea on the brain and nervous system, is associated primarily with L-theanine, or rather, two neurotransmitters that are produced in the body — gamma-aminobutyric acid (GABA) and glutamic acid, or glutamate. Because of their opposite actions on the nervous system GABA is sometimes called the “acid barrier”, and glutamate “excitatory”.

The combination of these two substances gives the tea a truly unique properties — the drink calms and energizes at the same time, decreases the susceptibility to stress factors without causing drowsiness, and Vice versa — improving attention. Both compounds trigger the neurobiological processes that lead to the production of dopamine — the “reward hormone,” and serotonin — “hormone of good mood and happiness.” 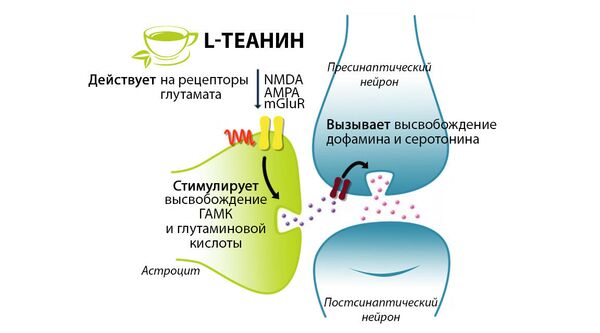 Last year, Japanese neuroscientists have studied the effects of L-theanine on cognitive function and resistance to stress in healthy adults. Studies have shown that after four weeks of administration of 200 milligrams L-theanine per day, which corresponds to eight cups of green tea, the subjects decreased the level of stress and depression, increased self-esteem. People showed the best compared to the placebo group results in all tests of attention and speed of reaction.

Struggle with insomnia and dementia

There is evidence that L-theanine helps to cope with insomnia, improves sleep quality, acting as a sedative, reducing anxiety and encouraging relaxation.

Chinese scientists have proved that prolonged habitual consumption of green tea reduces the risk of dementia and Alzheimer’s in old age. Those who throughout life, drank at least one Cup per day, for 55 years better cope with the task of remembering and processing information than those who did not drink tea at all.

A major role in improving mood and brain function played by the L-theanine. It easily crosses the blood-brain barrier and acts directly on brain wave activity, and are capable of very few natural nootropic drugs. However, scientists have found that its effect is enhanced in combination with other important components of tea — caffeine and catechins. It turns out, nature has already created for us the optimal drink.

In addition to anticancer and psychotropic properties of tea, judging by the numerous publications in scientific journals, and has other useful qualities. It reduces the risk of stroke and acute cardiovascular diseases, helps fight irregular blood pressure, lowers blood sugar, triggering cellular mechanisms of diabetes, and just prolongs life.

Recently, Chinese Academy of medical Sciences published the results of the project China-PAR, which had estimated the risk of development of cardiovascular diseases among the population. Among other factors, the researchers analyzed the effects of tea on human health.

It turned out that our regular followers of the tea party supporting this habit for many years, less — 39 percent — risk to earn cardiovascular diseases and strokes by 56 percent — a deadly heart disease. And the risk of death from all causes is a medical term — they had a 29 percent lower than those who drank tea regularly or not drinking at all.