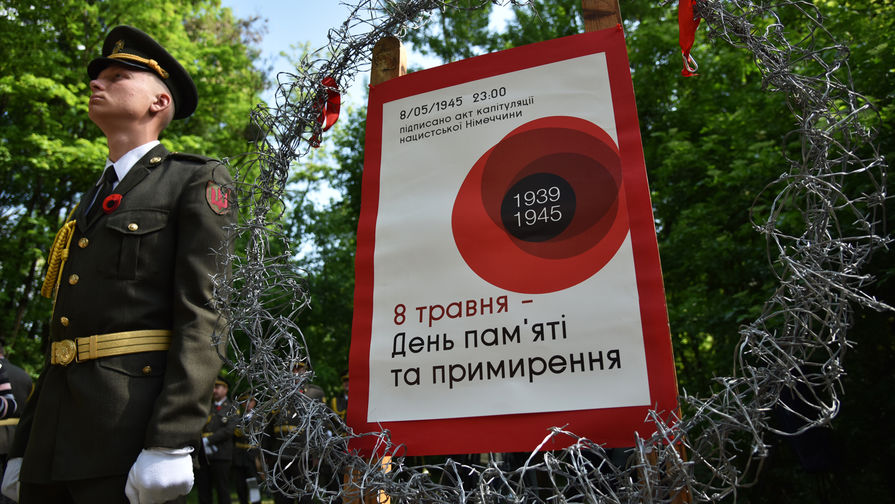 Ukraine celebrates the Day of memory and reconciliation. This holiday, symbolizing the reconciliation of the Ukrainian supporters of Nazi Germany with the red army veterans, Kiev is now in its fifth year is trying to submit as an alternative to the Victory Day. With special emphasis on the celebration of the Day of remembrance and reconciliation at the same time is associated with the anti-Russian policy of Ukraine and the country’s aspiration for European integration.

Ukraine may 8 is celebrated the Day of memory and reconciliation in honor of all victims of the Second world war. The holiday is celebrated in the country starting in 2015, but is not an official holiday. This year the celebration had to introduce some adjustments because of the pandemic coronavirus.

To the Day of memory and reconciliation in Ukraine are usually confined memorial events, a wreath-laying ceremony, meetings with veterans, as well as the action “First minute of peace” — takes place at 23: 01 local time.

However, against the background of harsh restrictive measures to combat the epidemic from all events had to be abandoned. The government promised only to conduct a traditional payments to veterans and to hold a series of ceremonies of laying flowers.

According to the latest data, on the territory of Ukraine revealed more than 12 thousand cases of the coronavirus, including 340 lethal. In Kiev actively discussing the beginning of lifting the restrictive measures, but it is planned for may 11 and will not affect holiday dates.

The holiday — Day of memory and reconciliation, appeared in the Ukraine for a reason. His statement coincided with the adoption of the law on decommunisation and the rejection of traditional celebration of Victory Day in great Patriotic war on 9 may.

Implementing a policy addressing the legacy of the Soviet period, in Kiev, decided that Ukraine should follow the example of Europe, where victory in the Second world war is celebrated on 8 may.

To withdraw completely from may 9, the Ukrainian authorities are unable and decided to share the memorable date for two holidays — the Day of memory and reconciliation (8 may), victory Day over the Nazis (9 may).

The confusion of the Victory Day in the USSR and European countries is the fact that the act of unconditional surrender of Nazi Germany was signed on 8 may 1945 at 22.43 Central European time — 00.43 9 may in Moscow.

In General, the decision of Kiev on the refusal of the Victory Day in the great Patriotic war can be viewed from two sides. First, in the framework of the withdrawal from Russia as “aggressor country”, partially due to policies of de-communization. Secondly, it is connected with the desire of Ukraine to European integration and to some extent unites the country with Europe.

The Day of victory over Nazism does not cause special contradictions and looks like a new name for the Soviet Victory Day. Day of remembrance and reconciliation also raises certain questions, particularly about what reconciliation is about.

As Ukrainian media, the authorities consider may 8 as a key holiday, and here it is necessary reconciliation between the parties banned in Russia, the OUN-UPA (organization banned in Russia) and veterans of the red army.

So Kiev gave Ukrainian nationalists, not considering the surrender of Nazi Germany as a victory, to celebrate the 8th of may. And the descendants of Soviet veterans were left on 9 may.

For six years the Ukrainian government has managed to split the country in the ratio of 70 to 30, said in a conversation with “Газетой.Ru” the head of the Ukrainian Institute of policy analysis and management (FAMP) Ruslan Bortnik.

“The majority of Ukrainians believe the key holiday Victory Day, and for the second group the main date was 8 may. It is a significant social group, especially in Western Ukraine, adhering to the right political tradition. That is, the social division of tradition to some extent has happened,” — said the expert.

In General the arithmetic is quite clear: everyone is on the side of the red army at war, about six million Ukrainians, and the number loyal to Hitler nationalists did not exceed 400 thousand. In such circumstances, “reconciliation” is somewhat irrelevant, it mostly works in Europe, where collaboration has become a mass phenomenon during the war.

According to the April poll by the Kiev international Institute of sociology, 52,5% of Ukrainians continue to adhere to the Soviet interpretation of Victory Day, victory of anti-Hitler coalition, it is perceived only 32.2%.

While it is possible to talk about the failure of Kiev’s attempts to impose on society a model of unification of the nationalists with the Soviet soldiers, as well as the shift in focus from 9 may to 8 number. Although the occasion and appeared at President of Ukraine Petro Poroshenko, who for five years greatly strengthened the role of the supporters of the UPA in society.

The current Ukrainian leader Vladimir Zelensky in the manifestation of a special loyalty to that small group of Ukrainian citizens can not blame, even though his actions can be seen some level of caution. In particular, the Kyiv for a long time refuses direct dialogue with the breakaway republics of Donbass, and here not the last role plays a negative attitude to negotiations with the nationalists.

However, as summed up by Ruslan Bortnik, in relation to the celebration of the Day of memory and reconciliation or victory Day over Nazism, compared with previous years, there is a normalization of the situation. The authorities do not make such a strong emphasis on the separation of these dates, as a whole for the current government both are equally important.