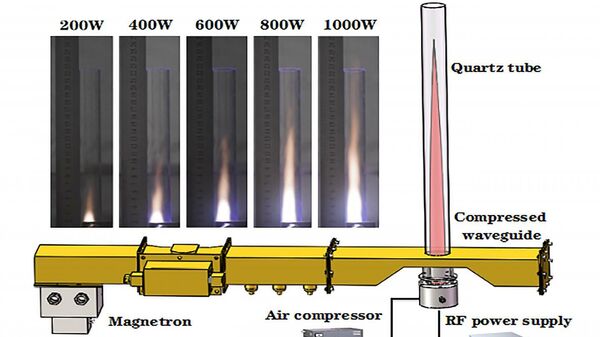 Chinese physicists have demonstrated a prototype jet engine that does not use combustible fuel. The driving force for it is the jet of the compressed plasma obtained directly from the air. Description of the development described in the journal AIP Advances.

In jet engines of modern aircraft and missiles impulse, which pushes the machine forward, created by the powerful jets of combusted fuel. Scientists from Wuhan University in China have developed a device that compresses the air and ionizes it by microwaves, generating a powerful stream of plasma.

While this is only a prototype, but the results demonstrate the feasibility of manufacturing environmentally friendly and quietest engine for the aircraft that only uses electricity and ambient air as fuel.

“The motivation of our work was to help solve the problem of global warming due to the fact that people use internal combustion engines for such equipment, such as cars and planes — presented in a press release from the American Institute of physics the words of the head of the study, Tana jaú (Jau Tang), Professor of Wuhan University. — Our results showed that the engine on the basis of microwave air plasma may be a potentially viable alternative to conventional jet engine fossil fuel”.

Scientists made a prototype able to levitate a steel ball weighing one kilogram above the quartz tube with a diameter of 24 mm. The researchers note that in terms of the weight produced by the prototype thrust comparable to conventional jet engines.

A method of obtaining a reactive plasma, which was used by the authors, is fundamentally different from previous attempts to create a plasma jet engine in that it as a substance of plasma is ordinary air. Previously, for example, in jet engines, spacecraft NASA Dawn, used the xenon plasma, which is not able to overcome friction in the Earth’s atmosphere, and therefore does not possess a sufficient capacity for use in air transport.

Plasma is the fourth state of matter besides solids, liquids and gas. In nature plasma exists on the Sun’s surface or inside the lightning. But this condition can also be obtained by artificial means. New plasma jet engine generates high-temperature plasma of high pressure on the spot using only the injected air and electricity. A powerful compressor compresses the air, which, passing under high pressure using microwave ionization chamber is converted into plasma jet.

To date, the carbon dioxide emitted by the combustion of fuel in the engines of commercial aircraft — not counting the military — is about 2.5 percent of all greenhouse gas emissions. The authors hope that their development will create the preconditions for the start of production jet engines that do not use fossil fuels.

Currently, scientists are working to improve the efficiency of their device to achieve this goal.