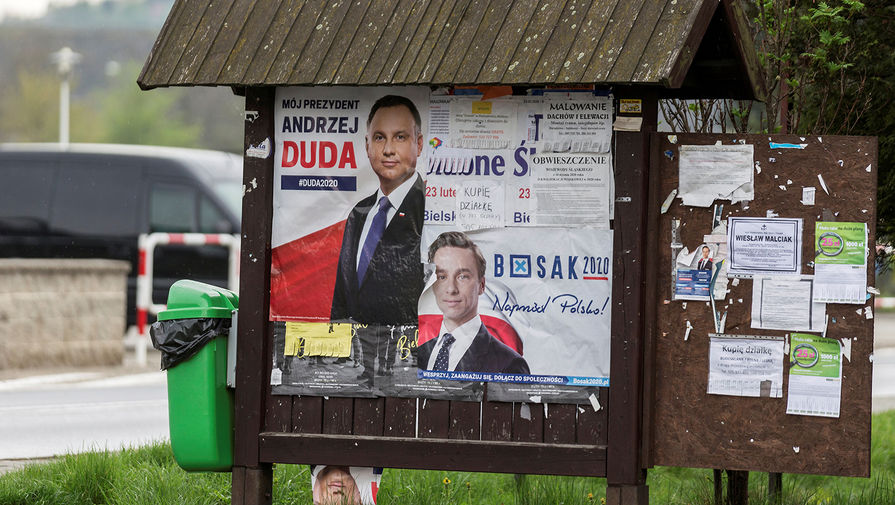 The Polish Sejm adopted a law on absentee voting in the presidential election that was to be held on may 10. For overcoming of the veto of the Senate voted 236 deputies, against — 213. Before the bill was rejected by the Senate, and the initiative returned to the lower house, where the majority of deputies from the ruling party to overcome a veto. Thus, the authorities decided to postpone the election, due to the fact that the time of their organization is simply not enough.

The Polish Sejm (lower chamber of Parliament) adopted the upper chamber rejected a bill to remote the election of the President.

On 5 may, the Senate rejected the initiative, but the next day the diet overcame the imposed veto. The bill was supported by 236 deputies, against were 213.

However, the elections on may 10 will not take place as expected by the government.

The state election Commission over plans in a pandemic coronavirus to organize postal voting did not have time to prepare everything necessary for elections and the adoption of remote voting was delayed.

“After the expiration of 10 may 2020 and presumptive Supreme court’s recognition of the elections invalid due to the fact that they were not carried out, the speaker of the Sejm of Poland will announce a new presidential election in the first possible time”, — said on Wednesday the leader of the ruling party “law and justice” Jaroslaw Kaczynski and his coalition partner, the leader of the political Association “Agreement,” Jaroslav Gauvin.

However, they noted that they found a solution that “ensures the poles the opportunity to participate in democratic elections.”

The first round of presidential elections was set for may 10, respectively, in its preparation was only two days. As expected, the elections will be postponed to June. This possibility, in particular, did not exclude earlier, Deputy Prime Minister of Poland Jacek Sasin. He said that the government may postpone the elections for 17 or may 23.

“On the eve of the elections, the poles do not know when the vote will take place. For this mess is responsible to the Senate with the opposition. They took the decision to torpedo the elections, — he said. — If the act will come into force on may 7 to prepare the electoral process in two days is impossible. Such delays are associated with malicious intent”.

The initiative involves the electoral remotely as in the first and in the second round. Every citizen will have to bring your marked ballot, and a statement that your vote he gave in person, and the procedure was conducted in secret. The documents should be put into a special box in the commune, which is tied to voting. In the case that the voter has committed any fraud on his or someone else’s card to vote or statement, he could face imprisonment of up to three years.

“The procedure for absentee voting, in form and time, proposed by the ruling party, is a pseudo-election. We will not participate in them. We hope that candidates and voters who share our concerns about the democratic future of Poland will do the same,” — said in a statement.

Not to participate in the elections and urged the former head of the European Council, former Prime Minister of Poland Donald Tusk. According to him, remote voting has nothing to do with democratic elections. In his video he stated that the vote was even held in this way cannot guarantee the security of citizens. In addition, Tusk stressed that in such conditions cannot be guaranteed secrecy of the vote. The politician urged to postpone the election, which could hold a “state election Commission on the recommendation of doctors and experts, and not the current government at any cost for their own political interests.”

Indeed, the election date plays into the hands of the current government of Poland. Now the current President Andrzej Duda a very high rating, respectively, he would like to take his position.

According to Politico, at the end of April the head of state was supported by 58% of citizens, while the rating of other candidates ranges from 5% to 11%. This situation provides a win Duda in the first round.

In addition to his for the presidency will face five other candidates — former Minister for family Affairs, labour and social policy Wladyslaw Kosiniak-Reed, journalist and social activist Shimon Golovnya, Deputy speaker of the Seimas Malgorzata Kidava-Blonska, a former member of the Sejm Krzysztof Bosak and former mayor of the city of Slupsk and LGBT activist Robert Bedron.

The high rating of the incumbent President largely due to the current situation in the world and its psychological causes. The fact that the crisis for the country make people rally around the leader. Many European politicians are now on the peak of its popularity — during a pandemic, the ratings increased significantly in the German Chancellor Angela Merkel, French President Emmanuel Macron, Prime Minister of Italy, Giuseppe Conte, Chancellor of Austria, Sebastian Kurz, Prime Minister of the Netherlands Mark Rutte, Prime Minister of Denmark Mette Frederiksen.

While the political success of leaders, most likely, won’t be long. After the pandemic, the country will face another, far more intractable problem — the restoration of the destroyed after the quarantine of the economy. During this period citizens will be presented to the leadership of very different demands.

At the exit of the constraints, faced with unemployment, the rating of political leaders can, on the contrary, much to give. In such circumstances, to go to the polls would be much more significant risks.

Besides, there is another factor in the ease of voting during a pandemic — this is obviously not going to play into the hands of the opposition.

Poland will become the first country in which presidential elections will be held remotely from the pandemic coronavirus. According to the latest data, the country identified 14 740 cases, of which 733 fatal.

To combat the spread of the virus, the government imposed severe restrictive measures, including banning all to conduct a mass event that affects the opportunities of the election campaign of opposition candidates.

In addition, the atmosphere of tension and even fear causes the media to move in the direction of less impartiality and the opposition for some time to put aside the confrontation.

Anyway, now the situation looks as if the Polish authorities simply do not have to go to falsification with high probability, Duda will get the first place without it. Into the hands of the President is only time, and the ruling party “law and justice” managed to carve out in the diet the majority of seats belongs to her and her partners of “Consent”.