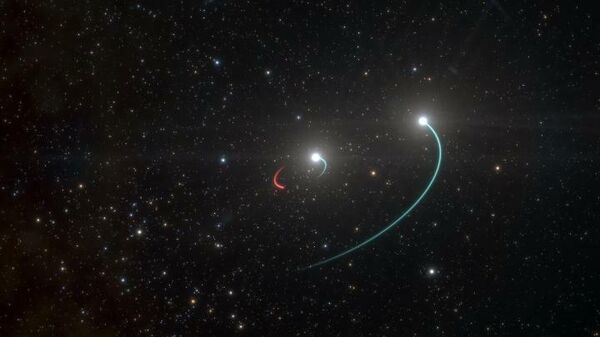 Scientists have found that just a 1000 light years from Earth star system HR 6819, in addition to the two stars of the companion are visible to the naked eye, there is also a black hole nearest to our planet. Description of opening is given in the journal Astronomy & Astrophysics.

A team of astronomers from the European southern Observatory (ESO) in collaboration with colleagues from other institutions using the 2.2-m telescope at the ESO La Silla Observatory in Chile has studied the details of the structure of the star system HR 6819 in the constellation of the Telescope. This system is so close to us that its star can be seen in the southern hemisphere without binoculars or a telescope.

Initially, the researchers watched the system in the study of double stars. However, after analyzing observational data, they were surprised to find in HR 6819 third, previously unknown body — a black hole. Observations with the FEROS spectrograph showed that one of the two visible stars is wrapped around an invisible object every 40 days, while the second star is at a large distance from the inner pair.

“We were absolutely shocked when I realized that this is the first star system with black hole, which can be seen with the naked eye” — are in the press release of ESO the words of one of the authors of the study Peter Hadrava (Petr Hadrava) of the Astronomical Institute of the Czech Academy of Sciences

The authors believe that in the near future will open a lot of such black holes. Hidden black hole in HR 6819 — one of the first found black holes of stellar mass that does not interact with the environment and therefore totally invisible. Scientists have determined its presence and calculated its mass by studying the orbit of the inner stars in a binary system.

“Invisible object whose mass is four times greater than the mass of the Sun could only be a black hole,” explains first author Thomas Rivinius (Thomas Rivinius) from the Chilean office ESO.

To date, astronomers have known no more than two dozen black holes in our Galaxy. Almost all of them strongly interact with the environment and detect its presence, emitting powerful x-ray radiation in this interaction.

But according to scientists, during the existence of the milky Way, many stars were supposed to end their lives as black holes. The opening of the “invisible” black hole in the system of HR 6819 gives astronomers a direction to find these hidden objects.

“In the milky Way must be hundreds of millions of black holes, but we only know about very few. Knowing what to look for will help us better find them,” says Rivinius.

Scientists have already identified a facility for the following research — star system LB-1 in the constellation Gemini.

“We realized that LB-1 can also be such a triple system, although we need more observations to tell,” notes Heide Marianne (Marianne Heida), researcher at ESO and one of the authors of the article. — LB-1 is a little farther from the Earth, but still quite close from the astronomical point of view. So this means that there are probably a lot more of such systems. Finding and studying them, we will be able to learn a lot about the formation and evolution of stars with a mass about eight times greater than the Sun that end their lives with a supernova explosion and the formation of a black hole”.

Astronomers think in such configurations, where the inner pair consists of two black holes or black holes and neutron stars may be mergers that emit too weak of gravitational waves to be detected on Earth.