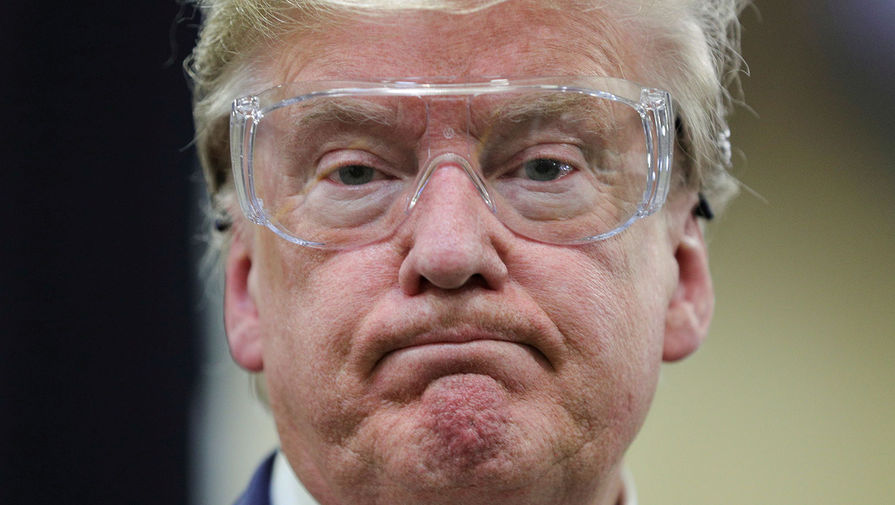 The President of the United States Donald trump confirmed that the activities of the working group on combating coronavirus is completed. Meanwhile, us States gradually begin to “open”. The head of the White house has long said that the United States can’t sit in quarantine for a long time, however, the lifting of the measures is not among the powers of the President is decided by the governors.

The US President Donald trump said that the activities of the working group on coronavirus in the White house to be completed. He said this during a visit to the factory for production of medical face masks in Arizona. USA today ranks first in the world in the number of infections and deaths from coronavirus. In the country identified 1 234 951 people with COVID-19, 72 023 of them died.

“Mike Pence [Vice-President] and the working group has done a great job, but we now consider a slightly different format, and this format is the security and openness. And probably this will create another group,” said trump told reporters.

The working group for combating coronavirus has been created in the United States on January 29. Its Chairman became Vice-President Mike Pence, and the group included more than 20 experts and officials of the US administration. The White house said then that the group’s goal is to lead the effort “to control, deter and mitigate the spread of the virus”.

Since that time, the mood and attitude trump to the virus has varied, with enviable regularity. In less than two weeks after the establishment of the working group, the White house said that the coronavirus “will go in April because of the heat,” and two weeks later reported that the infection rate in the U.S. is quite low, the country has the best experts, the authorities fully control the situation, and the stock market sank because of panic and intrigue in the ranks of the Democrats.

As the increase of cases in the US, the optimism of the American leader gradually changed to pessimism, and already on 13 March, he declared a state of emergency and imposed a 30-day ban on the entry of the countries of Europe. Meanwhile, the governors of the American States against the background of the state of emergency began one after another to impose strict restrictive measures.

However, ten days later, trump is “tired” of the quarantine and stated that by Easter (April 12) calculates the “open country” — the announced date, in his opinion, would be a “perfect time” to remove the restrictions.

“Our country was not created to be closed, — said trump, adding that every year in the US die from the flu “thousands of people”. But because of this, every year we are not closing the country. The cure is now worse than the problem, and, in my opinion, more people will die if we let it go on much longer”.

Two weeks later, on 5 April, the President said that the country is approaching the most difficult period of the spread of coronavirus, which, however, could be even harder if the country’s authorities have imposed restrictions.

“It seems, comes the tough week — this one or the next one. Unfortunately, a lot of people will die. But much less than it would be, we do not take the necessary measures. But people will die, he said. We will turn over heaven and earth to protect our great American people.”

April 16, trump announced that the US is ready to a weakening of quarantine and announced that the governors of those States in which the situation has stabilized, you can begin the gradual lifting of restrictive measures. Indeed, the situation with coronavirus in all different States, besides the US President has no authority to lift the quarantine at the state level. Further “opening” of the US depends on the actions of the governors.

On 1 may restrictions were loosened Texas, Alabama, Idaho, Iowa and Maine. In all of these States are led by Republican party.

The fast-approaching date of elections of the President of the USA — 3 November — puts trump in a difficult position. His campaign, he could build around the main trump — success in the economic sphere. However, a forced quarantine has shaken all the efforts and the achievements of the President in this area.

Six months before the election of the USA received no less disturbing news about unemployment than the statistics for the coronavirus. So, in late April, trump’s adviser on the Economics Kevin Hassett said in an interview with ABC that unemployment in the country can reach the level of the great depression, after the country recovers from the epidemic of the coronavirus.

“During the crisis of 2008, we lost 8.7 million jobs. Now we are losing so many jobs every ten days,” said Hassett.

The delay in the recovery of the economy will have very serious consequences, noted in conversation with “Газетой.Ru” the head of Fund of studying of the USA Franklin Roosevelt MSU Yuri Rogalev.

“Trump, of course, not a politician, he is a businessman, and he understands that the more losses the business suffers, the more you are at risk of bankruptcy for many companies, and then recover the situation will be very difficult. But such authority — to open or close the economy — it does not.

The resources of the Federal government in the US lies in the coordination and allocation of resources, there is adopted a law $2 trillion (of US government will allocate these funds for economic recovery. — “Газета.Ru”), and these funds should be allocated. That is the task of the Federal government, but again- they don’t just throw the head over the money, they decide with the United States, choose the direction, how and to whom to help, where and to whom to allocate funds and that,” — said the expert.

Although trump has no authority to remove the restrictions, he made it clear that puts the focus on the economy, announcing a gradual weakening of the quarantine.

Since then, the mood of the American leader began to improve gradually, and its relation to the coronavirus returned to the original optimism. However, since the end of April briefings trump became more talkative after he spoke about the possible new methods for treating coronavirus and received a barrage of criticism.

25 April during a press conference of the President, the Director of the research Department in the Ministry of internal security of the USA William Bryan said that sunlight and disinfectants, including alcohol and bleach quickly and effectively destroy coronavirus on surfaces.

After that, the journalists made by trump and offered to test a new therapy — irradiation of internal organs, infected with a coronavirus, light or ultraviolet rays.

Then it was suggested that to cure the disease using injections or internal use of disinfectants — alcohol or bleach.

“I’m not a doctor. But I’m fine here,” said the tramp, pointing to his head.

The American media has published a lot of materials, in which doctors and experts have criticized the idea of President, saying about the dangers of drinking disinfectants. With negative comments about the President made by some governors.

The next day, reporters asked trump to comment on his remarks, he explained that his words shouldn’t be taken seriously, “I sarcastically asked the reporters such as you, just to see what happens.”

After a few days, during a new briefing one of the journalists said that the hotline for the coronavirus in Maryland received hundreds of calls asking for guidance on the use of bleach or alcohol for the cure of infection.

In addition, over 18 hours after the speech, trump new York hotline for those who suffered from exposure to household chemicals, has received 30 calls, while previously, for the same period of time she received 13 calls.

“I can’t imagine why, the President said the question of whether he is ready to take responsibility for increasing the number of calls like calls. — No, I don’t know”.

As a result, the trump is decided to abandon their daily press conferences on the coronavirus. A few days later he missed his briefing, noting that such events “are not worth his time and effort” and accused the media of hostility.

One way or another, but the optimism of the President, apparently, does not add him at this stage of the pandemic political points. Critics of the President accuse him of seeking to run the US economy ahead of elections, putting at stake the lives of Americans.

During his trip to Arizona trump, announcing the termination of the activities of the working group, said that the Democrats hope for the failure of his policy in respect of the coronavirus, so they can win elections.

Probably, after the President warned about changing the format of the working group, its activities and composition will focus on the protection of the economy and overcome unemployment.

The American leader recognized that his strategy he will have to make sacrifices. “I’m not saying everything is perfect, and Yes, whether affected some people? Yes. But we must open our country and we’ll open it,” said trump told reporters.