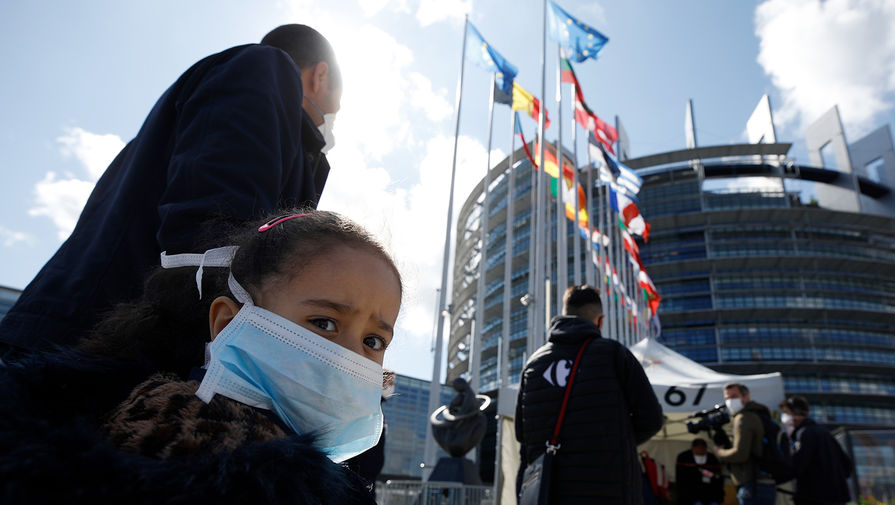 The European Union intends to define a new long-term goals for the program “Eastern partnership”, which aims at the development of relations of Brussels with six former Soviet countries: Ukraine, Moldova, Georgia, Belarus, Armenia and Azerbaijan. The countries of old Europe are not satisfied with the use of language that allows the former Soviet republics to think that participation in the program is the path to EU membership.

“The European Council awaits with interest the next summit of “Eastern partnership”, which is to discuss progress since the previous summit in 2017 to approve the long-term political goals to outline a path for further strengthening and expanding cooperation”, — stated in the published on Monday the statement of the European Council.

This statement is a guide for the formation of the upcoming summit of “Eastern partnership”, to be held in mid-June.

The EU hopes that the summit “will be a mandate for preparatory work” to define the “next generation goals” for the period after 2020.

The overall vector policy in the EU, in fact have already identified. The document notes that participation in “Eastern partnership” is not a road to EU membership, as is often seen in Ukraine and Georgia. Eastern partnership — a tool of political and economic integration of the European Union with the countries of the former USSR.

Thus, it was summed up 11 years of the program. Over the years three States — Georgia, Moldova and Ukraine — signed the Association agreement with the EU and have visa-free entry into the countries of the European Union.

However, in respect of Georgia and Ukraine is not so smooth, considering that the citizens of these countries frequently use tourist visas to work in the EU from time to time they threaten to cancel the visa-free travel.

In December 2018, published by the European Commission annual report on the implementation of the agreements on visa-free regime with the countries of the Western Balkans and the “Eastern partnership” was discussed about the violations of the ceasefire from the Ukrainian side. Representatives of the European Commission noted that Ukrainian authorities have yet to complete the required criteria for visa liberalization. Similar criticism was voiced against Georgia.

Not too successful was the cooperation of the Eastern partnership with Moldova. Expectations from working with this country were too high. Despite the declared commitment to democracy, the country has long had remained de facto under the control of the oligarch Vladimir Plahotniuc. This situation was corrected only last year, and a key role was played by sympathetic to Russia President Igor Dodon’s socialist party.

One of the main problems of “Eastern partnership” was the fact that the organization still has not received large-scale financial support. However, the EU is trying to do the work on errors — in partnership has long been discussed EU assistance in modernization of road infrastructure of the member-programs.

A distinctive feature of the “Eastern partnership” has long been the use of the site for criticism of Russia.

It was especially clearly seen after 2014, when the President of Ukraine became Petro Poroshenko. In Moscow has always maintained a fairly cautious attitude to the “Eastern partnership”, considering that its main purpose — the rupture of relations between Russia and the countries of the former Soviet Union.

A certain logic in this was: the initiator of the project was tightly configured in relation to Russia’s then foreign Minister of Poland Radoslaw Sikorski. Poland actively defends the achievements of the Eastern partnership.

For example, last summer “the main poles of the European Union”, former Polish Prime Minister and former head of the European Council Donald Tusk entered into an indirect argument with the President of Russia Vladimir Putin: according to him, the collapse of the Soviet Union was not “the greatest geopolitical catastrophe of the XX century”, and “good for Georgians, poles, Ukrainians and Central and Eastern Europe”.

These words reflect the concept of the Eastern policy of Poland, which feels like the last Outpost of Europe, designed to carry the light of Western civilization to the wild East.

We are talking about the concept of Intermarum — led by Poland of the Federation that was to include Ukraine, Moldova, Belarus and the Baltic countries. This idea promoted the “father of the Polish nation” – Jozef Pilsudski, but even after the Second world war she continued to live.

A Polish immigrant yuliush Milosevski in 1974 he published have become classics of the local political thoughts article “the Polish complex of Russia territory and GLA” in which he wrote: “Died in us imperialist tendencies, whether the historical Russian “Polish complex” is groundless? I don’t think. Many poles dream of living not only of Polish Lviv and Vilnius, and even about Polish Minsk and Kiev. Many believe the ideal of an independent Poland in Federation with Lithuania, Ukraine and Belarus, in other words, an alternative to Russian imperialism can only be Polish imperialism, and has always been so.”

That Poland was the main lobbyist of the European integration of Ukraine, Moldova, Georgia and other post-Soviet countries. Unlike Turkey, which carried out a similar policy on the ruins of the former USSR in the Caucasus and Central Asia, Poland has had a significant advantage — a real EU membership.

It is noteworthy that at the dawn of the format, the poles tried to connect the Kaliningrad region, but this initiative is predictable is not approved.

Moscow is particularly ambiguous attitude towards the initiative of “Eastern partnership” in Ukraine. The Minister of foreign Affairs of Russia Sergey Lavrov urged the West not to put Ukraine before a choice of “either-or”.

“We really want neighbourly relations with Ukraine and we want our Western colleagues, who are building a number of its programs, including the “Eastern partnership” did not our neighbors, including Ukraine and any other country, the choice is “either-or”, — said the head of the Russian foreign Ministry in the summer of 2017.

Work on the bugs

However, in fairness it should be noted that according to some experts Moscow, and she often put pressure on neighboring States to make “the right choice”.

The situation changed when the Kremlin is quite amenable to the fact that one of the members of “Eastern space” — Armenia — signed in 2017, agreement on enhanced partnership with EU. Sources “Газеты.Ru” close to the foreign community, called such a reaction “work on mistakes”.

Thus, signing the agreement, Armenia has not signed the provisions on free trade zone with the EU.

This fact shows that the EU selects each country has its own approaches and not using a single common. The need to take into account the specificity of relations of the countries-participants of the partnership with Russia and with each other has led to the fact that with each one the EU has built relations with strong own characteristics. In this regard, “talking about countries of “Eastern partnership” as a single group can only be very conditionally”.

Apart is one of the countries of “Eastern partnership” — Belarus, which has been repeatedly criticized by the EU for violations of human rights, and the participation in the programme was raised by some European officials questioned. However, in recent years in the EU take a greater interest in Belarus. Its leader Alexander Lukashenko has stopped calling “Europe’s last dictator” and began to send more friendly signals and in 2018 and 2019 was even invited to Brussels for a summit of “Eastern partnership”.

Although the “Eastern partnership” is in fact a Polish initiative is being implemented it is still under the control of Brussels, who preferred to pursue a more careful policy towards Russia. And this lack of solidarity, the permanent containment very angry Warsaw. It is not surprising that Poland is increasingly looking to the US, who are not afraid to quarrel with Russia extend its influence in Eastern Europe.

The present decision of the Council of Europe also hit the Polish ambitions in the region.

Apparently, in Brussels wins the position of the main opponents of further expansion of the enterprises of France and the Netherlands.

Amsterdam has obstructed Kiev in its Association with the EU. The Netherlands was the last country of the European Union, have agreed to ratify the agreement with Ukraine. In order to come to an agreement, the Netherlands had to go through two nationwide referendum.

As the newspaper notes, DW, the current situation is affected by the position of the President of France Emmanuel Makron, which from 2019 to keep a cautious rapprochement with Russia. Paris advocates the avoidance of mention of cooperation in the security issues in the framework of “Eastern partnership”, obviously not wanting to irritate Moscow. In the end, the EU Council did not mention the concept of “security”, referring to the building together with the countries of the Eastern partnership “a common space of democracy, prosperity and stability.”

In addition, the Council of Europe once again reminded that the program “is not directed against anyone”. Russia is not mentioned at all.

The main problem of the current EU decision on the future of “Eastern partnership” was that in the text of Association agreements with Ukraine, Georgia and Moldova, the European perspective of these countries mentioned.

As a compromise, the EU Council recalled the Declaration of the summit of “Eastern partnership” in 2017, which recognized “the European aspirations and European choice” of Ukraine, Georgia and Moldova.

However, the folding of the “Eastern partnership” of the question. It is likely that the rhetoric of the program will be less aggressive. However, the reasons for the reduction of economic and political cooperation the EU has no.

Clearly here the decision to allocate the countries-participants of the program of support packages to combat coronavirus. So, Ukraine was provided assistance of €190 million, and Belarus — more than €60 million.