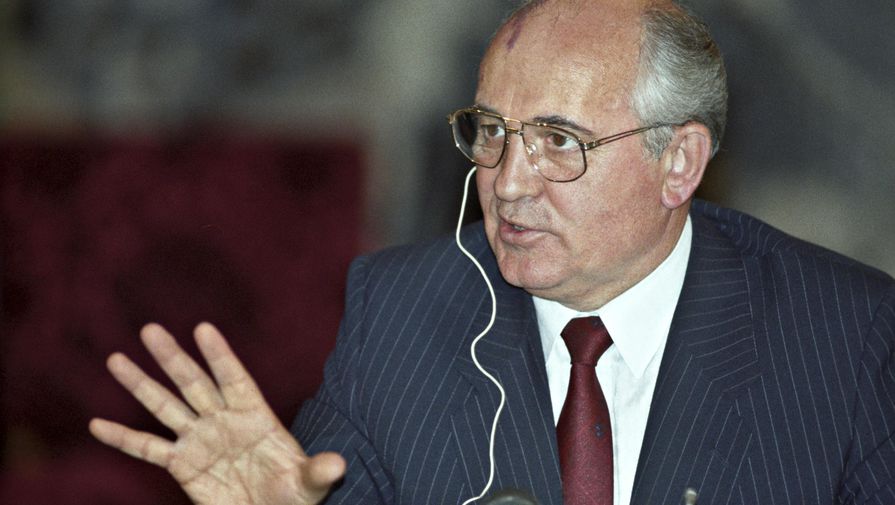 May 14, 1990, Soviet President Mikhail Gorbachev nullified the Declaration of independence of Lithuania and Estonia, as well as deprived of legal force similar document adopted by the Supreme Soviet of the Latvian SSR. This decision was another attempt to slow down the exit of republics from the Soviet Union. Gorbachev tried to delay the parting of the Baltic States with the Soviet Union, in the article “Газеты.Ru”.

May 14, 1990, Soviet President Mikhail Gorbachev signed a decree on the annulment of the decree of the Supreme Soviet of the Estonian SSR “On the state status of Estonia”. According to the document, any action of local authorities and citizens relating to this decree was declared illegal.

“The Supreme Council of the Estonian Soviet socialist Republic unilaterally adopted 30 March 1990 resolution “On the state status of Estonia” that recognizes the illegal state power of the USSR in Estonia. Thereby violated article 2, 70, 71, 73 and 75 of the Constitution of the USSR, the USSR Law “On the procedure for the solution of the questions connected with withdrawal of Union Republic from the USSR”, — noted in the decree of Gorbachev.

Thus the President of the Soviet Union has given official response to the course of the Republic towards independence, which was formally designated in 1988 — then adopted the Declaration of sovereignty of the Republic, who acknowledged the supremacy of Estonian laws over Soviet.

Strong calls for secession from the USSR began to be heard in the Baltic republics in the early autumn of the same year. Against the background of liberalization of state power in the context of Gorbachev’s perestroika in Estonia, Latvia and Lithuania were in the middle of a peaceful protest that was called the “singing revolution”. In particular, musical and political festival in Tallinn gathered about 300 thousand Estonians.

Estonia was the first Baltic Republic officially decided to secede from the Soviet Union, but the process for final selection is in an independent state occupied the country a year and a half may 8, 1990, Tallinn announced its withdrawal from the USSR.

Gorbachev’s decree the illegality of the resolution on the new status of the Republic was to slow down the movement of Estonia towards independence. However, any other action in respect of the Republic was not followed, and the decision of the President of the USSR practically did not affect the General course of the Tallinn government.

He recalled how the Chairman of the Presidium of the armed forces of Estonia Arnold Ruutel, the Soviet authorities promised him a big trouble, even after the adoption of the Declaration of sovereignty, but the expected response never came.

“Took hours of conversation, during which I was threatened with imprisonment for 10 years for deliberate violation of the Constitution of the Soviet Union. But I remained unconvinced. It was a turning point not only for Estonia. This began the collapse of the Soviet Union,” Ruutel told TASS.

Overall, with respect to Estonia, the Soviet leadership pursued a relatively cautious policy, as also evidenced by the events of August 1989. Then about 2 million citizens of the Baltic republics built a 600-kilometer human chain — connecting Tallinn with Riga and Vilnius.

The peaceful rally was timed to the 50th anniversary of the signing of the Molotov-Ribbentropa, which, from the point of view of the republics, changed their political status. The initiative of holding such a large stock belonged to the Estonians, in the end, Moscow condemned the action of not taking any action.

It should be noted that historical truth is not relative to the voluntary entry of the Baltic republics into the Soviet Union was identified by the ad hoc parliamentary Commission of the Soviet of deputies headed by academician Aleksandrov Yakovlev. They confirmed the existence of the secret protocols to the Molotov-Ribbentrop Pact, which led to the accession of Estonia, Latvia and Lithuania to the Soviet Union.

However, on 14 may 1990, Gorbachev attempted to slow down the exit from the USSR not only Estonia, but also Lithuania. In relation to the Baltic republics, the President of the Soviet Union acted tough enough, the nullification of its Declaration of independence was only part of a campaign against the Lithuanian authorities.

Session of the Supreme Soviet of the Lithuanian SSR adopted the “Act of restoration of independent Lithuanian state” cancels the Soviet Constitution, 11 March 1990, which caused a negative reaction in Moscow. Four days later, the third Congress of people’s deputies of the USSR declared the unilateral decision of Lithuania to secede from the Soviet Union.

“The Lithuanian leadership does not heed the voice of reason, continues to ignore the decision of the III extraordinary Congress of people’s deputies of the USSR, is taking unilateral action that contravenes the Constitution of the USSR and openly challenging and insulting to the entire Union nature,” Gorbachev wrote in an article for “the Truth”, pointing to the refusal of Vilnius to abide by the decision of the Congress.

In late March, the situation began to deteriorate in Vilnius introduced the Soviet forces, which occupied the building of the city Committee of the Communist party of Lithuania, the Higher party school, political education House.

Few weeks to the Lithuanian authorities, was an ultimatum calling before April 15, to recognize the actions of the USSR Constitution and to reject independence.

However, the resistance from the Vilnius preserved, so the Soviet leadership embarked on the next step of an economic blockade of Lithuania. It started with restrictions on the supply of oil and gas, and continued with the appearance of the list of goods the importation of which into the Republic is prohibited.

The list included food and various raw materials, the absence of which would stop most Lithuanian companies. To the fortieth day of the siege stopped all power plants working on fuel oil. Was limited to the supply of heat.

Only the blockade lasted two months and caused damage to Lithuania to 11% of GDP. The restrictions were lifted after the Vilnius made concessions and have entered a hundred-day moratorium on the independence act, agreeing to “intergovernmental negotiations”. With the date of reference of the hundred-day moratorium depended on the start of the discussion and become open, however, Gorbachev described the statement as a victory and has lifted restrictions on the country.

It stopped the way of Lithuania to the independence in time is 28 December, the moratorium was cancelled, which forced Moscow to resort to more decisive action. In response to the decision of the Lithuanian authorities, Gorbachev began a military operation. The climax of the crisis was the events of January 1991 when Soviet soldiers began to storm the television tower in Vilnius, which broadcast performances of supporters of independence.

During the operation 14 people were killed, over 600 injured, in the end planned for that day, the attack on the building of the Supreme Soviet of the Lithuanian SSR did not take place.

Coverage of these events in the media negated the attempts of Gorbachev to solve the issue by force, and also set up the leadership and people of the country against the Soviet Union.

While Gorbachev in his book “Life and reforms”, wrote that the Baltic republics due to historical and other characteristics could use in the Union a special status.

The Declaration of independence of Lithuania could be regarded as a symbolic act, reasoned the former President of the Soviet Union, the Republic’s leadership allegedly would satisfy the status of “associate member of the renewed Soviet Union”, and they were ready for dialogue.

However, the search for a new formula of relations with the Baltic republics in the reformed Union was broken “the sovereignty of Russia,” concluded Gorbachev.

The process of disengagement with the Union Central three Baltic republics have evolved in different ways. However, to avoid the aggravation of the situation only managed to Estonian independence fighters.

Latvia, like Lithuania, are faced with the tough measures taken by the Soviet leadership. 14 may 1990, Gorbachev acknowledged the Latvian Declaration “on the restoration of independence” of no legal force since its adoption on 4 may of the same year.

“The Declaration issued by the Supreme Council of the Latvian SSR with the violation of articles 70, 71, 73 and 75 of the Constitution of the USSR and the USSR Law of 3 April 1990 “On the procedure for the resolution of questions connected with secession of a Union Republic from the USSR”. It is against the legitimate rights and interests of other subjects of the Soviet Federation — the Union of Soviet socialist Republic”, — stated in the decree of the President of the USSR.

This ruling does not have the desired effect, Latvia did not abandon the path of independence, justifying the adoption of the Declaration of the poll among the inhabitants of the Republic. The events unfolded relatively peacefully until the beginning of the military actions of Soviet troops in Lithuania, which caused a wave of demonstrations in Latvia.

13 January 1991 in Riga hosted a protest rally with the participation of about 500 thousand people, which led to the beginning of the construction of barricades at strategic sites in the capital of the Latvian SSR and other cities.

To resolve the situation in the Republic was sent to the special unit, which was subsequently met with resistance from the local “self-defense forces”, “barrikadnikov”, but mostly of militia. Clashes continued until January 27, in clashes killed at least seven people.

“It resulted in a real battle in the centre of Riga. Human sacrifice, as in Lithuania, only strengthened Latvians in the intention to achieve full independence,” wrote Gorbachev with his book “Life and reforms”.

There is reason to believe that armed clashes in Latvia was deliberately provoked, stressed the ex-President of the USSR, the filaments are drawn to radical local separatists.

However, the situation is in any case not played in favor of Gorbachev and his desire to slow down the collapse of the Soviet Union. To the all-Union referendum on the preservation of the USSR of 17 March 1991 — all three Baltic republics have actually been lost, they officially announced a boycott of the referendum.