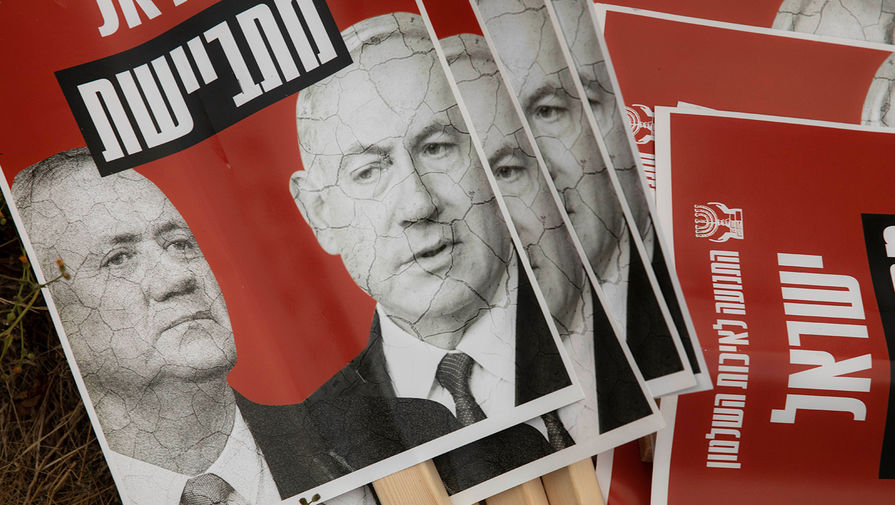 Protracted year and a half of political crisis in Israel is close to ending, but Prime Minister Benjamin Netanyahu once again has delayed this moment. Ceremony of bringing of the oath by the government transferred from Thursday to Sunday. Officially, the Likud party does not have time to distribute the Ministerial portfolios. However, there remains the possibility that, in these days, Netanyahu will be able to strengthen their positions in the government.

The beginning of the work of the 35th of the government of Israel has been delayed again. The swearing in ceremony members of the Cabinet was to be held on Thursday evening, but it was postponed to 17 may. The Knesset has already approved these changes in the schedule.

This is the second transfer: Israel had to gain, the government on Wednesday. However, two days before the event, the coalition members agreed to move the ceremony on the day, held on 13 may visit to Israel by U.S. Secretary of state Michael Pompeo.

This time the formal reason for migrating was not found.

Prime Minister Benjamin Netanyahu was forced to admit that he didn’t have time for the distribution of Ministerial portfolios.

In the night of 13 may the Prime Minister informed the country’s President Reuven Rivlin that the formation of a coalition government of representatives of the parties “Likud” and “Kajol-Laban” was completed. “I report that I was able to form a government,” Netanyahu wrote in the letter to the President of the Republic.

A long way to the Cabinet

The situation in Israel is more than extraordinary. Parties “Likud” and “Kajol-Laban” managed to form a coalition government after 11 months of failed attempts, for which parliamentary elections were held 3 times. From voting to voting result the parties have not changed, however, their current total is the most favourable to Netanyahu.

During the April elections in 2019 “Likud” and “Kajol-Laban” received 35 seats (out of 120). The September vote turned out for the Likud’s loss of three seats in Parliament, while their opponents have lost only two.

The third year the elections were scheduled for March 2020, however, this was preceded by the primaries of the Likud party, which Netanyahu competitors tried to challenge the place of the Prime Minister at the head of the movement. The attempt was a failure — the elections within the party policies scored 72.5% of the votes, strengthening their position ahead of the March vote.

As a result, for the third election held in March 2020, Netanyahu managed to mobilize the electorate: turnout was 71%. The Likud party received 36 mandates, “Kahol-Laban” — 33.

Apparently realizing that the best result for himself and his party to achieve it is unlikely to succeed, Netanyahu went on the coalition agreement with his opponent, the leader of “Kajol-Laban” and the Chairman of the Knesset benny Ganz.

Their coalition agreement was for Israel has been unprecedented. According to the agreement, the first 18 months of the term of office of the Cabinet his head is Benjamin Netanyahu, and the subsequent 18 — benny Gantz. In this case, the entire 36-month period both policies will have a veto. Ministerial portfolios to representatives of the blocks was divided equally.

This path was not easy. In order to pass it, the Knesset was to enact a law. In addition, prior to may 7, members of the coalition were waiting for the decision of the Supreme court, which heard the petition with the requirement not to allow Netanyahu to form the government.

The reason it was stated the prosecution Netanyahu, accused of bribery, fraud and breach of trust of the voter. The Prime Minister himself denies his guilt. According to him, he was targeted in a “witch hunt”.

The outcome of the trial was the decision of the Supreme court to oblige to eliminate legal inaccuracies contained in the agreement Netanyahu-Ganz. However, to remove Netanyahu from the political life of Israel with all its opponents failed.

The government agreed to

This story is close to ending. In accordance with the law, Netanyahu should lead the Cabinet sworn in a week after notification of the President. That is, until 20 may. With him the Prime Minister’s oath at the same time will bring benny Gantz. For this, as expected, on Friday he will submit to Parliament a request for resignation from the post of Chairman of the Knesset to be ready to assume the post of Prime Minister by rotation.

The first time he gave this statement on Monday, however from-for transfers, the ceremony was forced to withdraw it.

Overall, the current delay is not too profitable for Ganz, and, as the Israeli “channel 12”, cause him irritation.

The fact that the “Likud” and “Kajol-Laban” — not only the participants of the coalition agreement. In addition to their representatives in the Cabinet will include members of five parties – “Shas”, “Yahadut ha-Torah”, the “Derech-Eretz”, “labor” and “Gesher”.

In response to the continued for a year and half of political crisis was the creation of a government of consent, which will unite almost all the political forces of the country.

Behind the ruling coalition proved to be inconvenient for talks party of Russian-speaking Jews “Israel Our home”, and “Arab list” and, unexpectedly, the former allies of Netanyahu from the party “Yamina”.

The deputies of this party only recently moved to the opposition, which greatly weakened right-wing bloc of the government headed by the Likud. In addition to the party Netanyahu to him to include (and then only very tentatively) the Orthodox party “Shas” and “Yahadut ha-Torah”.

Thus, contrary to the hopes Netanyahu, the Israeli “government consent” will continue to tilt to the left.

Mutiny on the ship

Together with “Yamina” right unit combined 59 seats in the Knesset. To maintain this weight, Netanyahu has held talks with party leader Naftali Bennett, but to no avail. The Israeli media are actively discussing the possibility that

the delay of the ceremony of taking the oath need Netanyahu for another attempt to bring Bennett into the coalition.

Israeli commentators on the one hand I think that Ganz would not have agreed to the postponement, if he thought that Netanyahu is “preparing something vile”. On the other — indicate that the choice of the Chapter “Kajol-Laban,” essentially no, “because he has no leverage” on the head of “Likud”.

Yes, and Bennett goes on to say that the gap with Netanyahu his “final and irrevocable”. In the “Yamin” believe: the Likud betrayed the national interests of Israel and the Prime Minister will regret about the collapse of the right block coalition.

However, even if the delay in the ceremony really focused on the resumption of negotiations with the “hollow place”, this does not negate the problems within the Likud, which also interfere to form a Cabinet.

The party was a little “uprising”: its prominent members are dissatisfied with the distribution of portfolios, which offers Netanyahu.

For example, two high-ranking member of the political Council of the “Likud” AVI Dichter and tzachi Hanegbi to boycott the ceremony of the swearing in because they were not offered Ministerial posts. In addition, they are dissatisfied with the candidate on a post of the Minister of public safety.

And there are those who believe that the allocated portfolio is not good enough. Express their dissatisfaction with the potential Ministers of transport and higher education.

The reason for unity

Anyway, these intra-party differences are unlikely to give Netanyahu a reason to abandon the agreement to return the country to the political crisis and to hold it after the fourth election.

After being sworn in, the government will undertake the implementation of the political platform that was agreed upon by the parties and published on 13 may. In accordance with it, the first priority of the government will be the preparation of measures to combat the epidemic of the coronavirus and the subsequent economic crisis and the adoption of the budget

This is not surprising, because the global pandemic was the main argument that determined the need for Alliance between the bitter rivals.

The government agreed to set itself the task not only to exit the current crisis, but also to strengthen the socio-economic situation of citizens, to achieve dramatic economic growth by “improving labor productivity, promoting investment, remove regulatory and bureaucratic barriers, promote reforms to enhance competition and preserve the fiscal framework”.

Among the targets are also indicated to fight against social inequality in the country, the development of the peripheral areas of the state and their settlement and adaptation of immigrants, as well as national reconciliation.

Right under the leadership of Bennett were outraged that the text of the political platform does not mention the fate of Samaria and Judea, part of the Palestinian authority.

“In the Charter governments, in which you will need now to show your confidence, there is no obligation to apply sovereignty to settle in Judea and Samaria. This is one of the key campaign promises of Prime Minister Benjamin Netanyahu and the banner which he proudly wore last year. Not only that, but the Statute does not appear even the development of settlements in Judea and Samaria, only the development of the Negev, the Galilee, the periphery, and “the rest of the country”, — is spoken in the party statement.

“We find it hard to believe that you would have voted confidence in the government, which may not proclaim explicitly the word “Judea and Samaria” and shamefully hide behind the words “the rest of the country”, — was indignant in the Knesset deputies from “Amina”.

Netanyahu has indeed promised to join Israel’s territory on the right Bank of the Jordan. And, according to him, the bill on the annexation will be submitted to the Knesset in July.

This creates a space for reconciliation between “Likud” and “Yamina”, but at the same time creates a challenge to the unity government agreement, because the left has traditionally been more restrained stance on the Palestinian issue.

But the unity government Netanyahu-Ganz in this case, it will be required, since the reaction of Arab States to the unilateral annexation is unlikely to take long.