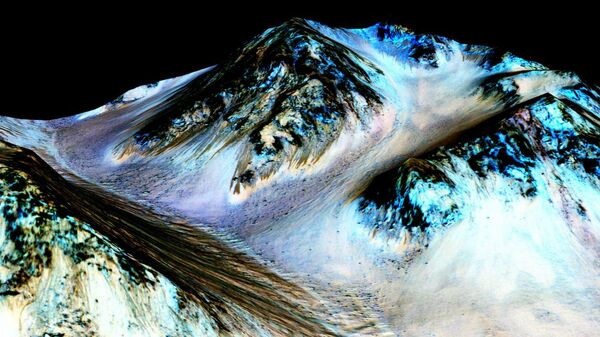 American scientists simulated the conditions that can exist in liquid salt brine on the surface of Mars and came to the conclusion that the presence of life in them is hardly possible. The study is published in the journal Nature Astronomy.

Due to the low temperatures and humidity, the presence of water on Mars is impossible, but salt brines, preserving, at certain concentrations, a liquid state even at very low temperatures, it can exist on the surface of the red planet. Under certain temperature and humidity, salt on the surface of the planet, you can start to absorb water from the atmosphere, forming a salty liquid. Earlier, the security cameras caught the formation of drops of saline on a hot rack lander “Phoenix”.

American scientists simulated the conditions on Mars to see if these brines to exist life and whether the risk of contamination of Martian samples by micro-organisms brought from Earth.

“Our team has studied specific regions on Mars, where the temperature of liquid water would allow to reproduce known terrestrial organisms — are in the press release the words of one of the authors of the study, Dr. Alejandro Soto (Alejandro Soto) from southwest research Institute. We used climatic information from atmospheric models and from measurements of the spacecraft. Our model predicts, where, when and how long the brine will be stable on the surface and at shallow depth beneath the surface of Mars.”

“We are conducting experiments at the University of Arkansas for many years to examine the types of reactions taking place in the conditions of Mars. On the basis of laboratory data, we can predict what is happening on the planet’s surface,” explains one of the study’s authors, Dr. Vincent Chevrier (Vincent Chevrier) from the University of Arkansas.

The simulation results showed that the maximum possible temperature of liquid brines in Hyper conditions of Mars is about minus 48 degrees Celsius. Such temperatures are possible only in 40% of the surface of Mars, but only for a very short seasonal intervals, constituting about two percent of the Martian year and not more than six consecutive hours. In the depths of the Martian soil, at a depth of up to eight centimetres of liquid salt brines may exist a little longer — within 10 percent of the Martian year.

Despite the fact that this range is much wider than previously thought, still, even the most extreme representatives of terrestrial microorganisms cannot survive at such low temperatures.

“This excludes life in the form in which we know it,” notes Soto.

“We showed that on a planetary scale Martian surface and shallow subsurface are not suitable for terrestrial organisms, because of the fluid there may be formed only in rare moments of time,” concluded first author Dr. Edgar Rivera-Valentin (Edgard Rivera-Valentin) Instiute of the moon and planets (LPI) of the United States.

Scientists believe that there is no fear that future missions to Mars will bring back the terrestrial microorganisms.