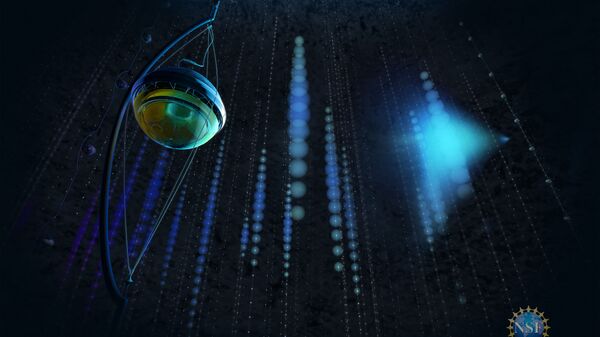 Russian astrophysicists for the first time found the source of the smallest of cosmic particles — neutrinos. It turned out that high-energy neutrinos are born near black holes in the centers of distant active galaxies. The study is published in the Astrophysical journal.

Neutrinos — one of the most mysterious elementary particles. Even their a lot scientists still don’t know, so it’s small. Neutrinos freely penetrate through the objects, people and even our planet.

Physicists have learned to successfully detect high-energy neutrinos coming to us from outer space, in their interactions with targets neutrino detectors, but where cosmic neutrinos, until recently, was unknown. Sources of cosmic neutrinos are searched for primarily in gamma rays, as it was considered that these particles should be born with gamma radiation.

Russian scientists from the physics Institute of RAS, INR RAS, MIPT and compared the data obtained at the neutrino telescope IceCube in Antarctica, from radio-astronomical observations of quasars and active nuclei of distant galaxies, and found a connection between the birth of cosmic neutrinos and outbursts of quasars.

According to the views of scientists in the centers of such galaxies located supermassive black hole, absorbing the surrounding matter. During the fall of matter onto the black hole part of the stream of particles is released back, accelerates and creates neutrinos, which are then at the speed of light flying through the Universe.

High-energy neutrinos can be produced only with the help of protons speeding near the speed of light. The IceCube neutrino Observatory since 2010 detects cosmic neutrinos and measure their energy and arrival direction.

After analyzing the origin of ultrahigh-energy neutrinos — more than 200 trillion electron volts — the authors found that the directions where on the Earth of neutrinos of ultrahigh energies indicate that bright quasars according to the network of radio telescopes around the world.

To test their hypothesis, the researchers used data of Russian radio astronomy telescope RATAN-600 located in the North Caucasus in Karachay-Cherkess Republic. In total they analyzed about fifty high-energy neutrinos, IceCube was.

The results confirmed that the cosmic neutrinos of ultrahigh energies are formed in the centers of quasars with massive black holes, accretion disks and emission of very hot gas.

“To us, scientists searched for the source of high-energy neutrinos, that is, “under the lantern”. We decided to check out unconventional idea, not really hoping for success. But we were lucky! Long-term joint monitoring at the international arrays of radio telescopes and great Russian RATAN allowed to obtain this interesting result,” — presented in a press release INR RAS the words of one of the researchers Yuri Kovalev from the LPI and MIPT.

“At first I thought “too good”, but after detailed analysis and numerous tests, we confirmed a clear link neutrino events with radio emission, which is then checked for long-term measurements of flares of radiation at the radio telescope RATAN-600 of the Special astrophysical Observatory, says another of the authors Sergey Troitsky of INR RAS. Is a great success in neutrino astrophysics, and now our discovery requires a theoretical explanation.”

Scientists plan to test your result with the Baikal neutrino telescope Baikal-GVD, which is currently being completed at the bottom of lake Baikal and has already started the data set.