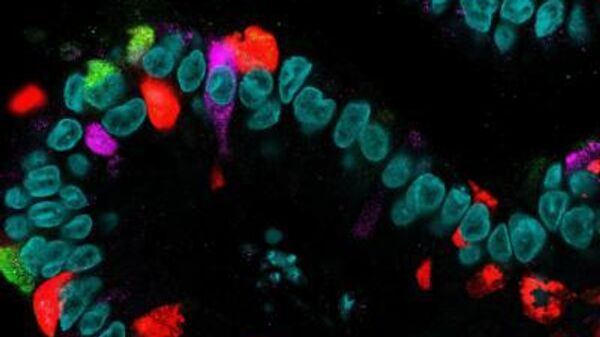 Dutch scientists first Atlas made and gave a detailed description of the hormones that produce the cells of the human intestine. According to the authors, this will allow you to create new treatments for diabetes and obesity. The study is published in the journal Cell.

Thousands of so-called enteroendocrine cells scattered throughout the gastrointestinal tract, in response to certain food components and bacteria produce a variety of hormones that create a sense of hunger or satiety, coordinating the contraction of intestinal muscles and stimulate the recovery of the protective cell layer of the intestine.

These cells are difficult to study because they are very small — no more than one percent of all the cells of intestinal walls and they are unique for different species of organisms, that is, human hormones can not be studied on the example of laboratory animals.

Researchers from the Institute of Hubrecht and Utrecht University in the Netherlands has developed a special method for the study of human hormone-producing cells in tiny organelles that mimic the intestine grown in lab from stem cells.

Increasing the activity of a gene called neurogenin-3, the scientists were able to dramatically increase the number of enteroendocrine cells in these mini-intestines, recreating all of their subtypes. Another innovative technique is the labeling color the hormone-producing cells of different types, which allowed to study in one organize ten main hormones in various combinations.

Using the so-called technique of sequencing individual cells, the authors first describe all the genes that are active in different types of hormone-producing cells. Based on these data, they created the first Atlas of the hormones of the human intestine.

The results showed the importance for the functioning of enteroendocrine cells some genes that were not previously described and also identified potentially new hormones that have not been identified in the intestine.

“Structured satin is a gold mine, full of fascinating connections between hormones, receptors and other genes used are clearly defined enteroendocrine cells. This opens up new directions for future research” — presented in a press release quotes one of the study’s authors Jens Pushop (Jens Puschhof) from the Institute of Hubrecht.

Using the developed tool, the researchers plan to conduct large-scale screening studies to explore what molecules in our food what types of enteroendocrine cells are detected, and what hormones, these cells produce in response.

Intestinal hormones such as ghrelin — the hunger hormone — serve as the main communication tool between the intestine and other organs — the brain and the pancreas. In response, for example, the pancreas begins to produce insulin. One of the most successful methods of treating type 2 diabetes is based on stimulation of gut hormone GLP1. Thanks to this treatment in some patients the level of glucose in the blood to normal without injections of insulin.