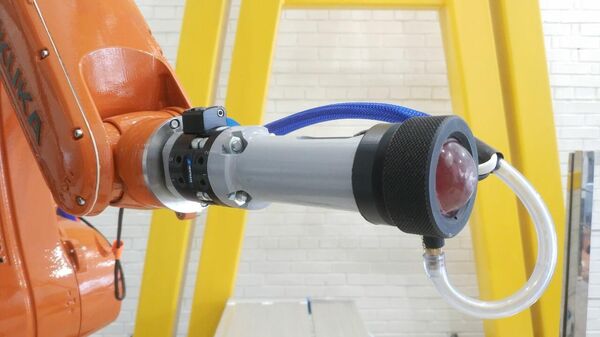 Engineers at Tomsk Polytechnic University (TPU) has proposed and patented a new method of automatic non-destructive quality control of large parts by means of ultrasound. According to the authors, this solution allows to minimize the use of liquids at the time of diagnosis, which makes the procedure much simpler and cheaper. About it reported in a press-service of the University.

In the industrial robot ultrasonic control of parts of common two approaches — full immersion (immersion of parts in water or other immersion fluid), and a local immersion (through the creation of a clutch with a fluid or through a water jet under pressure).

TPU suggested an alternative approach — contact method of robotic control. It uses a small amount of fluid that can be quickly removed from the part. Due to this, the implemented robotic ultrasonic tomography of large industrial facilities. It can be used for products vodonapornoy composites, which do not apply the traditional immersion methods of control.

“Similar devices are already used to create automated ultrasonic testing systems, ultrasonic scanners operating in immersion. We used a simple analogy: we needed a device which is in contact with the controlled object, similar to those used for ultrasonic studies of the human body, but it is suitable for automated inspection of large structures of complex shape. To this end, we have developed a durable and reliable design that can provide a stable acoustic contact and its use with a robotic manipulator”, — Sednev told RIA Novosti.

According to him, the engineers at the laboratory have designed housing with integrated flow channels and fluid collection. To implement such a design allowed for additive technology. In parallel, studies were carried out and selected material, ensuring the smoothing of the surface roughness of the test part and input of acoustic waves without attenuation.

Also, scientists have developed a material which provides abrasion protection and ensures a stable contact patch with the surface of the test part. Created a prototype was successfully tested and showed the results on the level of industrial widely used contact ultrasonic flaw detection.

In future, the researchers plan to create a prototype of such a device for multi-element acoustic matrix arrays, the application for this study is competition of scientific projects in the framework of the program of development of Tomsk Polytechnic University.

To do this, engineers have to solve a number of problems, such as the consideration of multiple reflections of the acoustic waves inside the device, selection of the optimal design for beamforming of the transducer, development of damping systems.

“Multi-channel NDT system give much more opportunities in comparison with single-channel: significantly increase the inspection speed, enable you to focus the sensor at different depths of the test object by finding smaller defects, allow to realize the 3D visualization of the structure of the object in real time,” said Dmitry Sednev.

The team has experience in creating and implementing systems immersion ultrasonic tomography based on multi-channel ultrasonic flaw detectors. Thus, according to the authors, the use of multi-element transducers or phased arrays in combination with the developed device will be the most advanced method of ultrasonic testing.

TPU scientists are ready to create a new class of systems — robotic ultrasonic tomography real time. This will allow a quality control at deserted productions and meet the challenges of the technology transition to Industry 4.0.