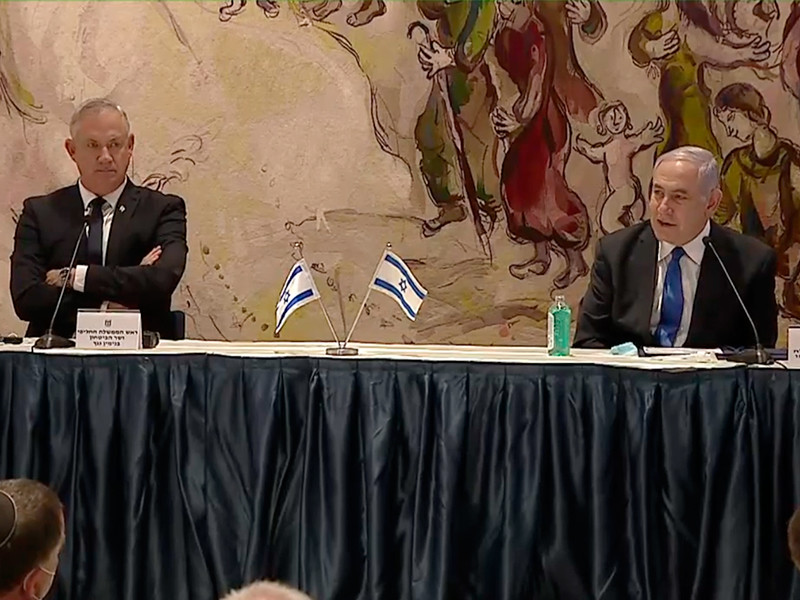 In Israel, the Knesset (Parliament) approved on Sunday the composition of the 35th coalition government of Israel, formed after the elections on March 2, Prime Minister Benjamin Netanyahu in a coalition with the leader of the party “Kajol-Laban” and former chief of staff benny Ganz.

For confidence in the new Cabinet voted 73 of the 120 deputies, after which Netanyahu and his coalition partner, benny Gantz brought the Prime Minister’s oath. A special meeting of the Knesset broadcast of the parliamentary channel of Israeli television, reports TASS.

“The people wanted unity, and he got it. I represent the 35th Cabinet of Ministers of Israel. The Prime Minister will be Benjamin Netanyahu. Benny Gantz will be Prime Minister after the rotation and the defense Minister,” said Netanyahu. “I ask the Knesset to approve the Cabinet”, – he added.

The Prime Minister’s statement was interrupted by shouting members of the opposition from the audience. “From this rostrum, I welcome the success in forming a unity government,” said Netanyahu, inviting other political forces to join the Cabinet.

“Citizens of Israel, I will continue to work for your sake and for the sake of Israel 24 hours a day. Thank you for your confidence, which has allowed me to form my fifth Cabinet of Ministers”, – he addressed to the voters.

Netanyahu, in his statement also said that the time has come for the annexation of the Palestinian territories. “Here’s the truth: these areas are the place where the Jewish people appeared and developed. It’s time to extend Israeli sovereignty and to write another glorious Chapter in the history of Zionism”, – he said.

The coalition agreement allows the Prime Minister to undertake steps for the dissemination of sovereignty to portions of the West Bank in accordance with the peace plan of the President of the United States Donald trump after July 1, 2020.

In the Knesset then began the ceremony of swearing in of Ministers. One by one they climbed to the rostrum of the Parliament and uttered the words.

In accordance with the coalition agreement of the parties “Likud” and “Kajol-Laban” Netanyahu will take over as Prime Minister until mid-November 2021, after which the position in the rotation will go to the Ghanaian.

Meeting at the Knesset passed in accordance with the instructions of the Ministry of health aimed at preventing the spread of coronavirus. Deputies in the hall shared the empty seats, and their faces were closed medical masks.

Spotlight falls on Kamala Harris as she addresses Democratic convention