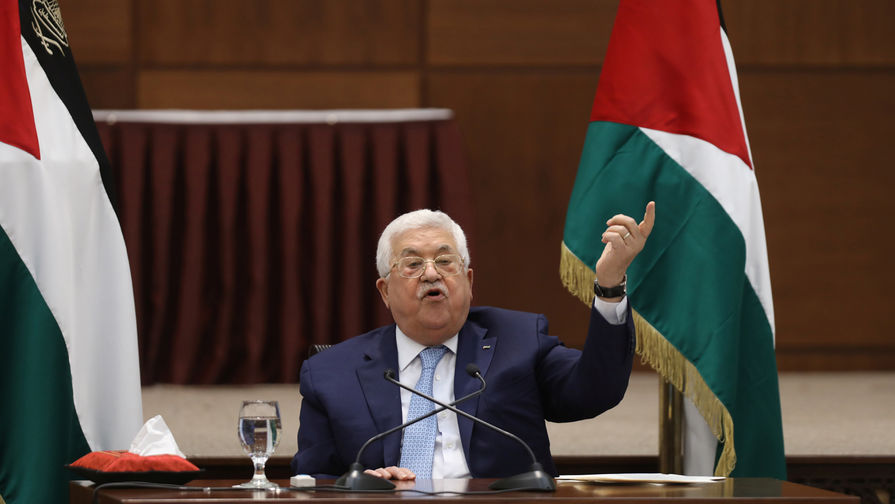 Palestine breaks all agreements with Israel and the United States, including agreements on security issues, said President Mahmoud Abbas. The reason for this step was the intention of Israel with US support to Annex the territory of Palestine on the West Bank of the Jordan river. Abbas stressed that from now on all the responsibility before the international community has Israel, as an occupying force. Israel’s intentions based on “the deal of the century” Donald trump.

Palestinian President Mahmoud Abbas said on the eve of the termination of all agreements and arrangements with Israel and the United States. The reason for this step was the intention of Israel to take control of disputed territory.

“Organization of liberation of Palestine and the State of Palestine is freed today from all agreements and arrangements with the governments of the US and Israel and from all obligations based on these agreements and the agreements, including in the sphere of security,” Abbas said at an emergency meeting of the Palestinian leadership.

The organization for the liberation of Palestine voted for the termination of cooperation with Israel and the United States in 2018 and gave Abbas the opportunity to carry out this step. The President has repeatedly threatened to cease cooperation, however, it is unclear exactly how his statement will affect the interaction between the parties, especially in the security sphere.

Israeli media reported that Palestinian security forces were ordered to stop communication with Israeli colleagues. The problem, however, is that they must coordinate their actions with the security personnel of Israel, even to move between areas on the West Bank of the Jordan river.

In addition, Abbas a few weeks ago has appealed to President of Russia Vladimir Putin with the request to organize a conference in Moscow on the settlement of the Palestinian-Israeli conflict, reports TASS with reference to the Ambassador of Palestine to the Russian Federation Abdel Hafiz Novalja.

“This conference should create a new mechanism for negotiations between the Israelis and Palestinians to put an end to confrontation on the basis of a two-state solution,” he said.

The anxiety of Palestine based on the “deal of the century”, which is in January of 2020 proposed by the President of the United States Donald trump for the settlement of disputes between the parties.

The territorial conflict between Palestine and Israel stretches back to 1967. The opposition has repeatedly tried to allow international mediators, however, nor to what result it led. Donald trump, however, believed that will be able to find a solution. The development of the “deal of the century” by the administration of U.S. President lasted almost three years. It is considered the chief architect Jared Kushner, adviser and son-in-law of the head of the White house.

28 Jan us President presented his plan. He offered to recognize Jerusalem undivided capital of Israel, but allow Palestine to build their capital in the Eastern part of the city. While the Arab state and the world community should recognize the sovereignty of Israel over the West Bank of the Jordan river, from the transaction.

Palestine, this situation is not satisfied and hopes that the government will consent to the surrender of Jerusalem was not. East Jerusalem, which Palestinians consider the capital of their state, was occupied by Israel in 1967. Since then, the international community considered the territory occupied. In the Jerusalem post of the Embassy. The UN Security Council, the UN General Assembly and many other international bodies have repeatedly demanded that Israel end the occupation.

In December 2017 Donald trump to recognize Jerusalem as the capital of Israel and moved the U.S. Embassy, sparking outrage from Palestine. This fact, Mahmoud Abbas, also remembered and referred to him announcing his decision.

“The U.S. administration has recognized Jerusalem as the capital of Israel, and has moved its Embassy, she published a “deal of the century” which laid the groundwork for its annexation of the Israeli declarations,” he said.

Abbas said that Palestine was the responsibility of the US government for the “oppression of the Palestinian people” and said Washington’s main ally “of the Israeli occupation government in all its aggressive and unfair decisions and measures.”

The United States really are partners with Israel and provides him with complete support. The recognition of Jerusalem as the capital of the country, the transfer of the American Embassy and the “deal of the century” became a vivid proof of that.

Donald trump told the details of his plan in the presence of Prime Minister of Israel Benjamin Netanyahu. This document, in particular, is the basis of the agreements on creation of the coalition between the Likud party and Netanyahu the block “Kajol-Laban” benny Gantz.

Netanyahu approved a plan to trump that, on the one hand, was a breakthrough — Israel rejected all the proposals put forward to resolve the conflict. On the other hand, “deal of the century” focused on protecting the interests of Israel.

However, the head of the White house does not believe that his plan is unfair. Palestine, according to trump, will double its territory to agree to the US proposal. So, as a compensation from the loss of territory in the West Bank head of the White house has proposed to allocate to the Arab state into two zones in the Negev desert South of Gaza. However, separated from the rest of the country the desert cannot be considered fair compensation for the loss of land.

In addition, the President of the United States considers it appropriate to establish Palestinian control over the Gaza strip. For this trump proposes to undertake using the Israeli earth tunnel or overpass. This will give the Arab country access to the sea, but to build a port will be possible only five years after the conclusion of the agreement and, notably, only with the permission of Israel.

Under the proposed plan, Washington is ready to allocate $50 billion to Palestine should be demilitarized, and Hamas is fully disarmed. In exchange, Israel must agree to freeze new activity for the construction of Jewish settlements for a period of four years. So much time is spent on the negotiation process on the formation of Palestinian statehood.

Mahmoud Abbas called the “deal of the century” trump “slap” in the country, a wave of protests against the US administration, and on 2 February a Palestine severed relations with the United States and Israel.

The fact that the Israeli government Benjamin Netanyahu and benny Gantz committed to the annexation of the West Bank of the Jordan river, caused even more outrage Abbas, which prompted him to go to break all agreements and arrangements with Israel and the United States.

The Palestinian leader pointed out that, under international law, “the occupying power is responsible for the protection of civilians under occupation, its property, establishes criminal liability for collective punishment, prohibits the theft of resources, the appropriation and annexation of land, prohibits the forced transfer of the population of the occupied territory and prohibits the movement of colonizers in the occupied land.”

Now Israel, indeed, has shown a willingness to annexation, and the fact that he may simply never get a chance to implement the plans. He has the full support of the United States, therefore, it not only can not prevent annexation of the West Bank of the Jordan river, but also to help with that. With such appeal were informed U.S. Ambassador to Israel, David Friedman.

And, as reported by the Israeli TV channel “13”, Israeli Ambassador to U.S. Ron Dermer also called for the annexation in the near future. The fears of Israel connected with the fact that in November in the USA presidential elections are held, the outcome of which depends, in particular, Washington’s support of the annexation of the Palestinian territories.

“We must promote the annexation now, because we don’t know what will happen in the presidential election in the United States. [Democratic candidate Joe] Biden can win, — quotes The Guardian the words of Dermer in the course of negotiations in Washington. Now there is a window of opportunity, so it must be done now.”

Although Biden is very loyal to Israel, he even in January have expressed their disagreement with the plan of trump.

“Peace plan requires the consent of both parties. This is a political ploy, which may lead to unilateral measures for the annexation of the territories and even more to harm the future of the world,” said former Vice President.

Palestine is now awaiting the support of the international community. Abbas called on other States to prevent Israel from committing the annexation, and not to recognize the “deal of the century”. The Palestinian President also said that the government is ready to ratify all the agreements on the accession to international agreements and conventions, and confirms their desire to settle the conflict with Israel, but under the condition of holding talks under international auspices and rules of international law.

“We will continue to prosecute for crimes against our people in all international bodies and courts,” — reads the statement of Abbas.

In Russia, for the day 3557 people have recovered from coronavirus