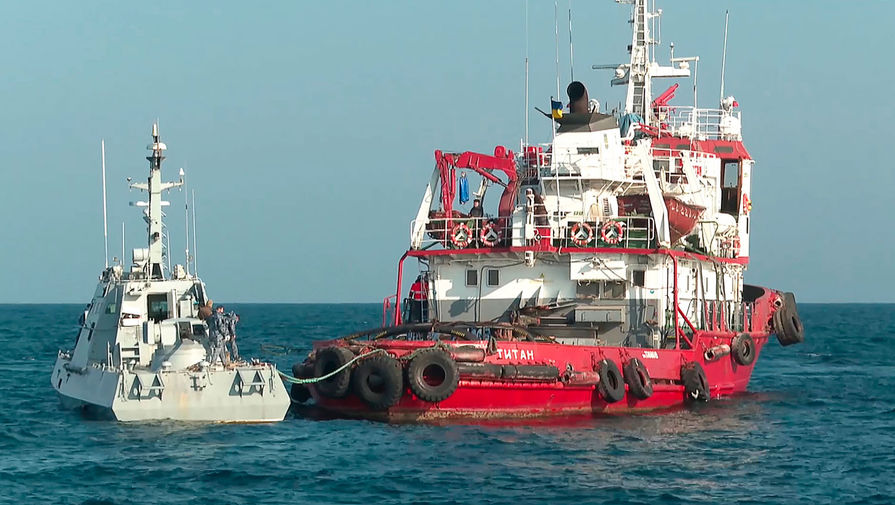 The foreign Ministry of Ukraine will submit to the international Maritime Tribunal the anti-Memorandum in connection with the incident in the Kerch Strait. According to Ukrainian Deputy foreign Minister Eugenia Enina, Kyiv will demand from Moscow for moral and material compensation for seamen detained in the incident.

The Ukrainian foreign Ministry intends to submit to the may 22 Memorandum against the Russian Federation in the international Maritime Tribunal in connection with the incident in the Kerch Strait. About it on air of TV channel “Ukraine 24”, said Deputy Minister of foreign Affairs of Ukraine Yevhen Yenin.

He stressed that Kyiv will demand compensation for moral and material — for Ukrainian sailors, detained in the incident of the FSB and later released during a prisoner exchange.

“Of course, we researched the best international practices, including the practice of the European court of human rights, and we are certainly at the highest level will demand compensation for the damage to our sailors,” — said ENIN.

The Deputy foreign Minister of Ukraine added that this issue “people who work well,” and the office was fully occupied with Affairs against Russia.

In February 2020, the head of the Ministry of justice of Ukraine Denis Malyuska said that Kyiv is exploring the possibility of filing new claims against Russia to international courts. “Submit, and then inform [the subject of lawsuits]. Because the other side is also watching us. While we are at the stage of collecting evidence, reasoning. Let it be a surprise”, he said.

According to the Ukrainian Minister, now Kiev is the five lawsuits against Moscow is “in the process of defining”. In other words, the courts examine issues its competentele in these matters.

“If the court finds that the competent to consider them, then move on to consideration of the merits. It is a common practice,” added Maluska. He noted that the international court proceedings last for years and the speed with which they did not.

In February last year the then head of the Ministry of justice of Ukraine Pavel Petrenko said that Russia goes against five cases in the European court of human rights. One for the “human rights violations in Crimea,” the second, “violations of human rights in certain territories of Donetsk and Lugansk regions”, the third — about the “facts of abduction on the territory of Donetsk and Lugansk regions of orphans and disabled children by the militants and their movement on the territory of the Russian Federation”.

The fourth lawsuit filed by Ukraine in connection with “a violation of Russia’s rights of Ukrainian political prisoners,” and fifth business “captured” the Ukrainian seamen as a result of the incident in the Kerch Strait. The claim was filed by Kyiv in the ECHR in January 2019, the Ukrainian authorities have accused Moscow of violating the rights of Ukrainian seafarers. This was announced by the Deputy head of the Ministry of justice of Ukraine, Commissioner of the ECHR Ivan Lyschina. We will remind, Moscow all Ukrainian denies the charges, pointing to their unproven and ineffective.

Kiev asks to recognize the detention of Russia’s three ships and the arrest of 24 sailors illegal. The Ukrainian authorities believe that it is contrary to articles of the Convention on the protection of human rights and violates the right to life, prohibition of torture, right to liberty and security of person, right to a fair trial, and judicial proceedings.

We will remind, on November 25, 2018, the ships of the border service of the FSB of Russia detained in the Azov sea, three ships of the Ukrainian Navy, which violated the state border of Russia for several hours did not respond to requests to stop and made dangerous manoeuvres, moving to the Kerch Strait.

Russian President Vladimir Putin during a big press conference in Moscow said that illegal crossing of the state border in the Kerch Strait from the Ukrainian military vessels was a provocation in the interests of Petro Poroshenko, who for the sake of increasing political ratings ahead of the presidential election compromise with the interests of their own people.

In September of last year Moscow and Kiev after talks Zelensky and Putin had an exchange with people who have been convicted or arrested on the territory of States.

Homecoming was mutually by the formula “35 on 35”. In Ukraine, home to, among others, went the 24 Ukrainian seafarers detained in the Kerch Strait for the violation of the Russian border.