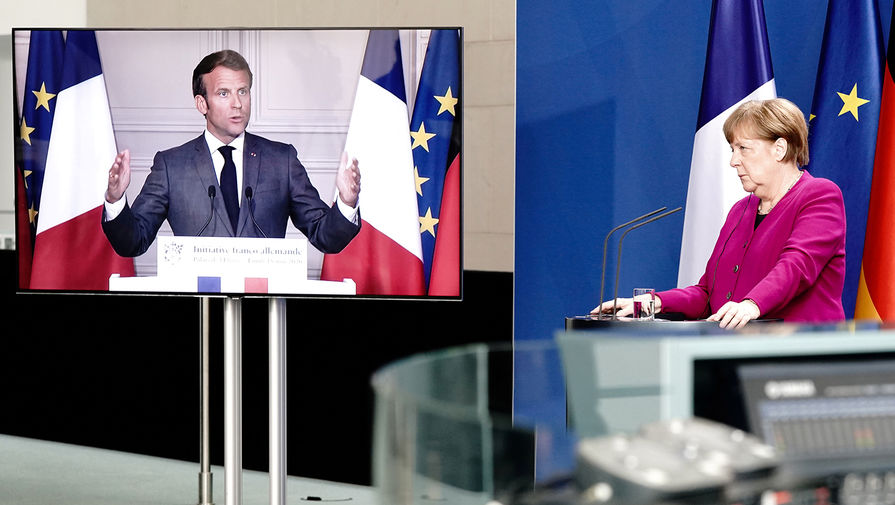 The plan of Germany and France to support the EU economy in a crisis caused by the pandemic coronavirus, liked not all the countries of the Association. Part of the EU member States perceive the initiative with caution — Austria has decided to offer its own plan, and Italy, indicates the insufficiency of the measures promoted by the Berlin and Paris. It threatens the final approval of the initiative, as this requires the support of all EU countries.

German Chancellor Angela Merkel along with French leader Emmanuel Macron announced a plan to restore the economy of the European Union on 18 may. The proposal of Berlin and Paris suggests the creation of a Fund of €500 billion, which will provide financial support for those affected by the pandemic in the EU member States.

The main difference between this initiative from past proposals that we are talking about budget subsidies for European countries, not loans. The German-French Fund will receive funding from the European borrowing in financial markets on behalf of the EU at a favorable rate.

In this German-French plan should be a part of the overall EU budget for the years 2021-2027 and allow the affected countries to restore the economy, without falling into dependence on its allies.

However, the initiative of Germany and France has caused quite controversial reactions within the EU, the very next day after the presentation of the plan was opposed by the authorities of four countries — Austria, Denmark, the Netherlands and Sweden. These countries dissatisfied future growth of spending in the community.

Austria did not support Germany and France, so together with three other EU countries is preparing an alternative proposal, assuming the issuance of loans instead of grants, said Austrian Chancellor Sebastian Kurz.

“We want to show solidarity with countries that were especially hard hit by the crisis, but we believe that the right way is loans, not grants. We believe that it is possible to stimulate the European economy and avoid generalizations debts”, — said the head of the Cabinet of Austria.

In Vienna surprised by the initiative of Berlin and Paris, said Kurtz, any state has the right to have something to offer, but the decision “should make all member States of the EU.”

As explained by the Minister of Finance of Austria Gernot Bluemel, the German-French plan assumes that the EU will take out loans to Finance grants — these proposals cannot be supported.

In turn, the Finance Minister of Sweden Magdalena Andersson called to wait for the final proposals of the European Commission’s European economy recovery, which must be presented on 27 may. According to her, after that we can evaluate all supplementary plans, in particular the initiative of Berlin and Paris.

“Quadruple resistance” are United in the fact that the EU member States receiving support, should return the funds, even if they were borrowed in the financial markets. In addition, they believe in the necessity of structural reforms in the countries that will receive loans.

With such statement do not agree, the representatives of southern Europe, which, in fact, already caused some controversy on the stage of the first package of emergency aid from the European Union. It amounts to €540 billion, which Austria, the Netherlands and Germany offered to dispense with the use of the European stability mechanism (ESM).

This point is criticized in Italy and Spain the most affected EU member States, because the allocation of funds through the ESM provides for the transition to a policy of austerity. The countries of southern Europe noted that they should not be punished for the crisis caused by the pandemic, and that the encumbrance of their large debts impede the economic recovery of the entire European Union. The parties came to a compromise, reducing the requirements for assistance by the stabilisation mechanism, but still leaving the credit component.

Austria, Denmark, the Netherlands and Sweden, opposing the plan of Germany and France, set a certain trend, which was subsequently joined by Hungary. In Budapest agreed that eliminating loans in favor of subsidies is a wrong decision in a crisis.

Along with opponents from the German-French initiative emerged and supporters. For example, a number of Eastern European States,generally praised the proposal, although noted the lack of important variables in the submitted proposal. In particular, in Poland called on to clarify the mechanism of distribution of funds only after verification of these rules Warsaw would be ready to make final conclusions.

At the same time in Slovakia is convinced that the initiative must include “a clear incentive” for carrying out structural reforms in the affected States. As said Slovenian foreign Minister Ivan Korcok, the plan must be “fiscally responsible” — all EU member States are required to have access to new subsidies.

Positively expressed respect to the German-French plan in Belgium, according to the head of Finance Alexandra De Croo, the proposal must Europe — a combination of solidarity and responsibility.

In addition, supports the initiative of Spain, Prime Minister Pedro sánchez called the plan of Germany and France step in the right direction, which meets the requirements of the Republic. “Now it’s time for the EU to offer the right financial package. We must continue to move forward,” — said the head of the Spanish government.

In Italy, however not entirely share the optimism of their neighbors, although I think the German-French initiative is quite bold proposal. According to the Italian Prime Minister Giuseppe Conte, this is a good step on the way to a common response to the pandemic, but the EU needs to do much more.

“Europe cannot afford to repeat the mistakes of the past, making too much or reacting too slowly. Failure to act quickly will lead to a dramatic expansion differences between the countries-EU members.

Left unchecked, this crisis will jeopardize the whole European project, because our market has not kept pace with other leading economic powers,” writes the Comte, in his article for Politico.

Resources to support the European economy, even taking into account the German-French Fund does not match the required values, said Italian Prime Minister, Brussels is obliged to provide a more ambitious proposal that meets the needs of Europe.

“If we let coronavirus crisis to increase economic and social disparities in the EU, we not only fail to achieve key goals , but will fan the flames of nationalism and to enhance long-term differences in our Union,” concluded Conte.

Calls the Italian Prime Minister is unlikely to change the point of view of the opponents of the German-French initiative that, in General, do not support the creation of an additional burden on the EU budget. The plan itself can be regarded as an alternative to existing proposals in Brussels, which partially takes into account the main requirements of the most affected countries.

While there is no certainty that this proposal will be taken as its approval will require the support of all member States of the European Union. However, this does not negate the imposition of the plan on the agenda, followed by a discussion, which is likely to be quite difficult.